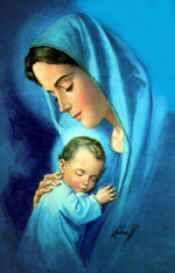 A little over four years ago I experienced my first miscarriage.  It was the beginning of a dark time for me as I would go on to have two additional losses (a stillbirth and another miscarriage) over the next two and a half years.  But at the time I wasn’t aware of what the future held (thank goodness for that).  My mind was only on the present sadness enveloping me.

As I reflected on the month of May and honoring our Blessed Mother, I found myself returning to thoughts of that first miscarriage.  The thing is, at the time of that miscarriage, I didn’t really have much of a devotion to Mary.  I wasn’t hung up at all worrying that a devotion to her might detract from my devotion to Christ.  It wasn’t that.  I just hadn’t ever bothered.  But I had a desire to seek a deeper relationship with her knowing that through her I would also deepen my relationship with her Son.

So really it came as something of a shock to me when in the days following the miscarriage I often had thoughts of Mary holding my little baby for me.  There she was in my mind’s eye wrapping that precious child in her loving arms.

That image simultaneously brought me great grief and great comfort.  My heart broke seeing my child held so tenderly because I wanted to be the one holding him or her.  And yet, I took great comfort in it as well.  If I couldn’t hold my child who better than Jesus’ own mother.

Eventually, slowly, the comfort I took in that image became greater than the grief.  Even today, over four years later, the grief still lingers, but the comfort the Blessed Mother has given me in knowing my child is kept close to her, wrapped in her arms, brings a smile to my face.

For a long time, too, I kept this image to myself sharing it with no one.  It was one of the few things I kept private.

Four months after the miscarriage we had a Memorial Mass said for our child whom we had named Casey Marie.  Following the Mass a wonderfully holy woman who was there approached me to express her sympathies and give me a hug.

While still holding me closely she said, “During Mass I saw Mary on the altar and she was holding a little baby, wrapped up warmly and snuggly in her arms.  I know it was your little Casey.”

{Side note: that wonderfully, holy woman is now also a joyful religious sister.}

To say I was stunned is an understatement!  I hadn’t told anyone that this was what I had seen several months before.  I was shocked at how her vision was the same as the little image I had seen in my mind’s eye!!  All I could do was hug her back and tell her thank you.  I was truly at a loss for words.

I would like to say that my devotion to Mary has increased since that time, and it has gotten slightly better, but it is not what I thought it would be and know it can be.  It is a relationship I am still working on and will probably always be working on.  Losing Casey was one of the worst experiences I had ever gone through.  And yet I also grew spiritually from the experience.  I believe I was given a gift.  I did get to see my child and at the same time I caught a glimpse of what awaits me in heaven.

For that I am eternally gratefully.

As we honor you, Blessed Mother, during your special month, I just want to say thank you.  Thank you, Mama Mary, for the gift of seeing my child safely wrapped in your arms.  I pray that you bring all mothers who have suffered and are suffering the pain of pregnancy or infant loss comfort and consolation through your motherly intercession.  Blessed Virgin Mary, pray for us.

18 Replies to “Wrapped in Your Arms”