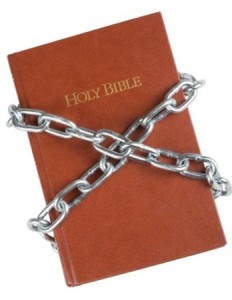 As Catholics, we’ve all heard it before, “Catholics don’t read the Bible.”, “Catholicism is unbiblical!”, “They don’t even have Bibles in their pews!”, followed by examples of Bible “abuse” in the past of the Catholic Church where she chained Bibles to the pulpits (true) so the faithful couldn’t study them (false), or burned copies of the Bible (true) because, again, the Church didn’t want the faithful to study them (false).  Allow me to explore this characterization, as it contains a bit of truth, along with some natural misunderstanding.

Children of God whom are nurtured by Sola Scriptura as their rule of faith have a very different relationship with Sacred Scripture than both modern and historical Catholics.  These devoted Christians have at least one copy of God’s Written Word, and many will lovingly delve into those pages daily for their source of God given nourishment.  They can’t imagine a spiritual life that isn’t drenched in the pages of Scripture.  “Husbands, love your wives, even as Christ loved the church and handed himself over for her to sanctify her, cleansing her by the bath of water with the word, that he might present to himself the church in splendor, without spot or wrinkle or any such thing, that she might be holy and without blemish.” (Eph 5)  Thus, they are simply appalled that a Catholic may not own a Bible at all!  And again wonder, why are there no Bibles in the pews at a Catholic church?!

Modern Catholics do not share this same relationship with Sacred Scripture because historical Catholics did not.  Catholicism has a 2,000 year history, and due to this, the average Catholic has been brought up in the vestiges of an ancient faith that predates wide spread literacy and the printing press.  For the first 1500 years of the Church, all Bibles were hand written by scribes, to painfully exact standards.  If a scribe made a single mistake on a piece of parchment, the entire piece of parchment would be destroyed and rewritten, to ensure pristine copies of Sacred Scripture were released to the public.  These Bibles took years to complete and cost three years’ wages (like a modern day house, which we purchase with 30 year mortgages).  These copies of God’s Word were so expensive and rare, that the local churches would chain them to the pulpits to prevent theft, protecting the availability for all of the congregants.  The average layperson did not own one of these Bibles because of the expense and rarity, not to mention that person’s inability to read would have been troublesome even if they did have a copy.  Their daily spiritual lives did not revolve around individual study of Sacred Scripture, instead they found spiritual nourishment in other ways –  namely prayer and the Mass.  The historic Catholic would travel to mass (available daily) to hear God’s word read from the ambo, and explained in a homily.  His soul would be nourished not only by hearing the written word, but also by his prayerful presence with the Blessed Sacrifice of the Mass.  Outside of the Mass, his daily life would be sustained through a devotion to prayer.

God’s having allowed for the invention of modern technology has been fantastic for education and the spread of His Word, but it has also brought about changes in our relationships with Him.  When the printing press came on the scene in the 1400s copies of Bibles were being printed left and right!  And not at all with the same careful consideration the scribes had used.  The Church, in her effort to preserve the distribution of pristine copies of God’s Word, did indeed burn many poor prints or translations.  Around this time literacy grew and continued to grow, and soon the famous Reformation was born.  While our Sola Scriptura brethren grew in a faith formation focused on the pages of God’s word written in Scripture, our Catholic ancestors continued with their sturdy 1500 year old faith formation based on the mass and prayer.

Today, first world Catholics still may not own Bibles, though many do.  We’re still raised with an emphasis on mass attendance, frequency of sacraments, and a rich prayer life for our faith formation.  No, we still don’t have Bibles in our pews, but instead, we have missals which contain the passages to be read each day for mass.  These missals ensure that our priests are reading the same three to four selections of God’s written Word as all of the other priests in the other parishes that day.  The missal ensures that all faithful Catholics are read the entire Bible in three years of daily mass attendance, which makes for a pretty hefty emphasis on Sacred Scripture.

As God, in His providence, would have it, the latest advancements in technology have allowed for widespread conversions to Catholicism amongst many of God’s devoted children from the Sola Scriptura traditions.  These converts, having had their faith muscles strengthened on the written Word coupled with a vibrant passion for Christ, are uniting with the ancient Church and Her fullness of Christ’s teaching for an explosive combination!  God is showing us that we are weakened by our separation, and are strongest when we unite!  Our newest Catholics are inspiring us cradle Catholics to discover the Biblical Truth of Catholicism, providing us the knowledge armor of Sacred Scripture in conjunction with Sacred Tradition.  Study of the Scriptures in light of Tradition is eye opening and amazing.  But let us never forget that Holy Mother Church protected and provided these Scriptures for us.  We can never divorce the Scriptures from their Mother, for when we separate the two, we will be mislead by our own weaknesses.

Many thanks to the Holy Spirit for our Sacred Scriptures, and also, many thanks to all of our convert Catholics for bringing into the Church their passion for God’s Written Word!

9 Replies to “Why Catholics Don’t Read the Bible”