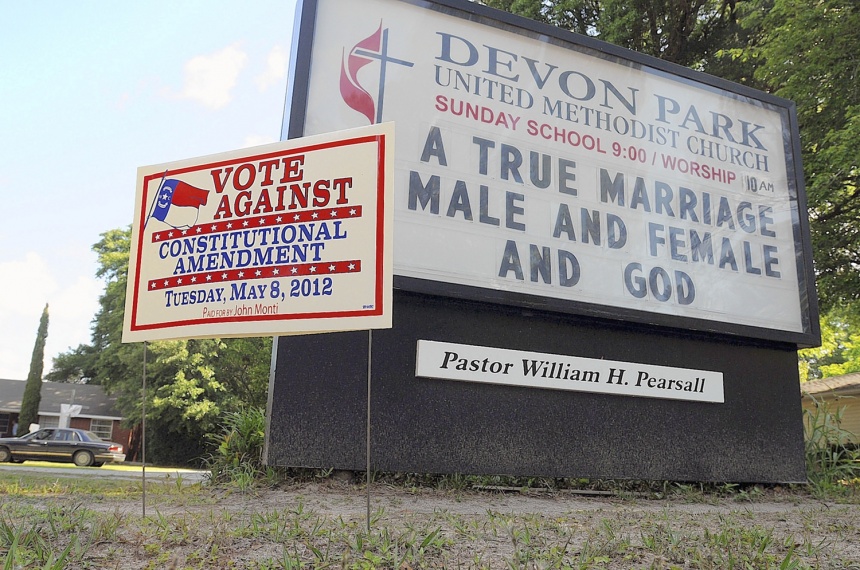 I’m a print junkie. Which is why I can get online to find a recipe for beef stew, start clicking through links, and end up still online three hours later reading about the spotted Brazilian cave slug or Kim Kardashian.

This weekend, for instance, I was looking up information on the presidential debates and came out of the fog an hour later reading reviews for the movie Brokeback Mountain. I noticed that the more I read, the easier it was for me to feel compassion for the two main male characters, which many reviewers called “star-crossed lovers.” I hate to see anyone suffer and it was impossible to rejoice in the emotional pain the men experienced from being kept apart their whole lives.

The sympathy their story engendered, even in the heart of this staunch Catholic, makes it easy for me to understand why so many people–including so many Catholics–support gay marriage. After all, if love is an emotional and sexual attraction between two consenting adults, what makes a heterosexual relationship any more deserving of legal recognition than a homosexual one?

In the past, the answer was simple: children. It was procreation that made the heterosexual union sacred and the only one worthy of legal recognition and protection, because it produced and nurtured the future citizens of the country. If government’s proper role is to promote the common good, then encouraging marriage–and discouraging the dissolution of marriage–promoted one of the most noble goods: encouraging people to have children and then raise them in stable, healthy, and lasting families.

But something changed and maybe a short history lesson is in order to understand why. As Planned Parenthood so often reminds people, contraception has been around for time immemorial, with at least one plant so harvested for its contraceptive properties that it became extinct before Christ was even born. Contraception was widely used by the pagans, but it was soundly rejected by Christians. It’s immoral, Christian teaching declared, because it violates one of the primary purposes of marriage: to produce children.

Christian tradition, then, has always condemned contraception; even the Protestant reformers maintained that it was illicit to put up barriers to life within the marriage act. In fact, it was a Protestant (not a Catholic) named Anthony Comstock who led the charge to make contraception illegal in the United States in the 1800s. By the early 1900s, however, American progressives such as Margaret Sanger began to pressure public health officials and church leaders to condone contraception. They were successful and at the Lambeth Conference of 1930, the Anglican bishops changed their position and declared it licit for married couples to use contraception for “serious reasons.” The U.S. Federal Council of Churches joined them a year later. Contraception was then made a legal right for all citizens in 1965, when the Supreme Court ruled in Griswold v. Connecticut that contraception fell under the “right to privacy.” When countless Catholic laity, priests, and even bishops elected to publicly and privately dissent from the Church by rejecting Humanae Vitae three years later, it was the beginning of the end for marriage.

Few Christians are willing to admit that it was the disintegration of heterosexual marriage–ushered in by Christians themselves–that opened the door to gay marriage. When Christians turned against the wisdom of their longstanding sacred tradition and embraced contraception, they made procreation–one of the hallmarks of legitimate marriage–optional. In the 1970s, we went even further and embraced no-fault divorce laws, taking out yet another pillar of the institution: permanence. Judeo-Christian tradition had always defined marriage as a permanent, life-long covenant between a man and a woman for the procreation of children and the betterment of the spouses. In short, marriage is for babies and bonding, until the end. But when we exchanged authentic marriage for the counterfeit during the past century, when we changed it to a mere temporary contract between consenting adults, in which children are optional, we necessarily opened the door to every other kind of sterile union consisting of consenting adults, including homosexual ones.

What’s so wrong with gay marriage? By the standards of most heterosexual marriages these days, not much. Until Christians reclaim God’s original plan for marriage in their own lives, it’s doubtful that we have a prayer of preserving the legal integrity of this blessed institution.

6 Replies to “What’s So Wrong with Gay Marriage?”