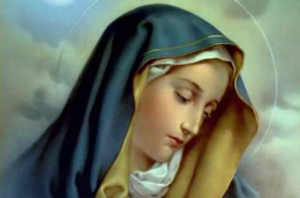 As we enter the month of May as Catholics we begin a month of honoring our Mother Mary.   At our parishes we may sing songs about Mary, have a May crowning, offer novenas and encourage each other to pray the rosary, plant a Mary garden, read books about Mary, or go on pilgrimages to shrines built in her honor.  It is a special time of the year to be sure!

But why do we honor Mary?  Wasn’t she just a mere woman?  Wasn’t she just like us?  Our faith tells us that Mary was handpicked by God to bring His son, our Savior, into the world.  We believe that she not only was born without sin (as she was saved by Christ before she was even born) but that she remained sinless her entire life.  When God sent his angel to Mary to announce she was highly favored and chosen she could have said no to God’s request at any moment.  Instead, she chose to obey God and say yes to His Will.  She was no mere woman; she was the Mother of Our Lord.

As Christ hung dying on the cross he looked at his favorite disciple and said, “Behold your Mother!” And from that hour the disciple took her into his home. (John 19:27)  Christ loved his mother so much that he wanted to make sure that she was taken care of after he was gone.  Christ honored his mother.  As Christians we are called to follow in Christ’s footsteps.  When Christ gave his mother to John he gave her to us as well.   We are also called to honor his mother. 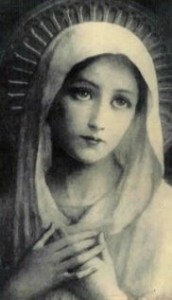 Outside of the aforementioned activities how can we honor Christ’s mother, our mother?  Several years ago I had an epiphany (and wrote about it here)… I was feeling down about my lot in life at the time.  It was Mother’s Day and I was looking forward to a day off.  My husband was going to help me out with the kids and I was just going to have some down time.  Unfortunately he became sick and it was not going to happen.  It really bothered me.  I was grumpy and probably a little whiney and asking God why I just couldn’t have a break.  As I was cleaning I began thinking of Mary and how she might handle the situation. Would she whine and pout?  I decided that she wouldn’t.  I began to feel silly for my reaction to something so clearly out of my husband’s hands.  That day, as a wife and mother, I began to think “what would Mary do?”

We have heard it said that “imitation is the sincerest form of flattery”.  I would argue that we can also show our honor through imitation as well.  With that in mind, over the years since that day I have tried to remind myself that I have the perfect role model in which to turn to when things are so hard for me as a wife or mother.  I often stop and think about how Mary might handle the situation that I am struggling with.  How are my actions and decisions honoring our Blessed Mother?  If I have a baby in my arms that just won’t stop crying I think about how Mary would have gently handled Jesus.   When I am overwhelmed with the household chores and duties I think of Mary gracefully and respectfully serving those she loved.  When I am worried about whether or not we have enough to provide for our family I think of Mary, open to God’s will, and saying yes to His request even though she had no idea how God would provide for her.  When I am worried about our trials and tribulations I think of Mary searching for Jesus and finding him in the Temple.  When I am consumed with sadness and feel unable to go on, I think of Mary at the foot of her son’s cross.  These images of our Holy Mother help me to continue on.  They give me strength, courage, and wisdom.

God, in His infinite wisdom, knew that not only did He need a willing servant to bring His son into the world for our salvation but that we would also need a mother whom we could look to in times of need.  He saw fit to not only give His son an earthly mother to raise him but to give us a mother whom we can turn to when we feel lost, alone, confused, joyful, excited, and happy.  She knows our pains and sorrows, our happiness and love because she has been here too.

During this month of May when we honor our Mother I ask you to think to yourself, “What would Mary do?”  You can honor her as the mother of our Lord and thus honor Him by imitating her life… saying yes to God, serving others, accepting the trials of life and turning to God to see you through them.   We only have to look at our Mother to see how our Father hopes we will live our lives. We are taught that Mary will always lead us to her son.  If we are ever in doubt as mothers, wives, or daughters (or fathers, husbands, or sons) we only have to ask, “What would Mary do?” and we will not only know the right thing to do but will be headed straight into our Savior’s arms.

3 Replies to “What Would Mary Do?”