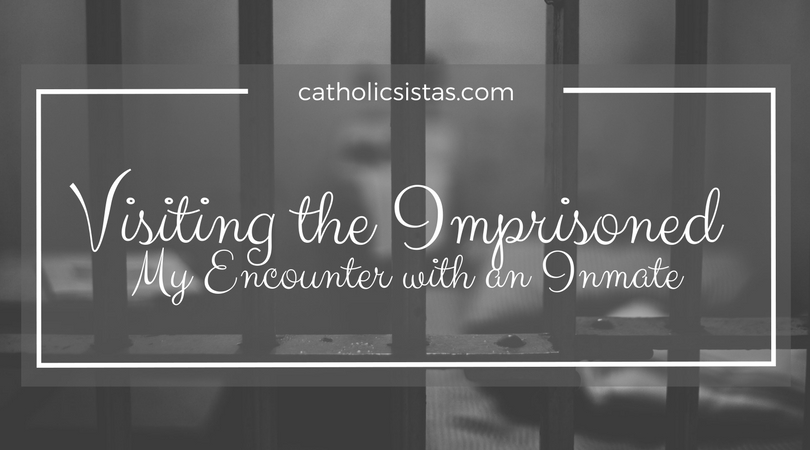 Disclaimer: This post is about my correspondence with Dahvie Holmes, with whom I run the blog Housewife // Savagelife (www.housewifesavagelife.com).  This post for Catholic Sistas has been edited for a general audience, including only a brief description of violence.

I have a friend who’s…different from my other friends. For one, we communicate via letter (basically a medieval undertaking). Second, on the return address where the name should be there’s a number: 20141008200.  Third, when I open this letter, it’s not uncommon to read something like this:

yoooo what’s up Elle? you crazy, man.  I be laughin like a MF whenever I think about this.  I always look at the “other side” (outside of jail) and wonder…how do they think.  How do they kick it?.

My friend’s name is Dahvie Holmes, and he’s an inmate at Cook County Jail.  Over the past year and a half, I’ve had the privilege of getting to know him, attempting to understand his world, and starting a blog with him. Through encountering his experiences and thoughts, I’ve “visited the imprisoned”–which has radically changed my life.

I could get into how we met (a crazy story with a couple of miracles sprinkled in–if you’re curious, you can read it here: https://www.housewifesavagelife.com/blog/2017/6/8/a-housewife-encounters-the-savagelife).  But I want to give Dahvie the stage.

“I love her to death”

Dahvie doesn’t play pleasantries.  He gives such a raw insight into his life.  He sent me a letter which started with this story:

So I call the house, first my mama was talking to some dcfs (Department of Children and Family Services) agent so she asked me to call back.  That blew me to hear who she was talking to because I already have 2 siblings in foster care.  Well they adopted now but it’s the same thing to me.  They not with they birth family.  I don’t even know them.  Never meet them either.  It’s a sad story.

Now to hear she talking to the dcfs again while she in custody of my baby sister scares the eff out of me cuz that’s my heart.  I love her to death.  I would never forgive my mother if she loses her.  But the guilt really eats at me because I’m in jail and can’t do a darn thing to help.

It gives me chills to read that.  I can’t help but think about my family.  How heartbreaking would it be to call up your mom and hear that? That your mom was sending one of your siblings into foster care?  And you couldn’t do a thing about it?

A little backstory: Dahvie’s mom is addicted to crack.  She was probably using it while she was pregnant with Dahvie.  Maybe all her kids.  I couldn’t help but to think: wouldn’t foster care be good for his sister to get out of a bad situation?

My mom isn’t the best parent but at least she has support.  My sister needs to be around family.  Her family not no darn strangers.  SO I believe it isn’t best for her.  But if it was, of course I would want the best then yeah.

The thought of having a sister disappear while your away, into the hands of strangers.  It’s hard to even wrap my head around it. I had reduced Dahvie and his family to equations and statistics.  But in this, I experienced his pain.

This next letter completely underscored the discrepancy between Dahvie and I.  We live in two completely different worlds. It’s eye-opening and devastating:

To see your homies on the news.  Mama cryin and stuff. It’s a effed up feeling.  I wake up to the deck screamin my name sayin my block on the news.  I jump up to see two brothers was gunned down at the restaurant. Face shots.  Them was my lil bro’s too. Even though we had some differences I still loved them.  It hurt me to found out like this. This war stuff real.

Another huge emotional knockout.  Knowing those people, and seeing it on the news…I couldn’t imagine.  And I told that to Dahvie, I really could not imagine. I knew exactly zero people who had been shot at. Zero. Zilch.  Nada.

It’s everyday life for me.  I’m actually numb to it. It’s weird to me hearin how y’all live.  I believe you know somebody who been shot they just ain’t tell you or embarrassed to admit it.  If you really don’t know someone (besides me) then my life, my cellie life, and everybody around me life really been messed up.  Darn SMH. Darn. That would be so hard to accept.

Dahvie couldn’t even imagine a world where people hadn’t been shot at, where this wasn’t a regular occurrence.  He couldn’t imagine my comfortable suburban life, my violence-free, gang-free existence.

This got me thinking. What if I grew up in a neighborhood where people had been shot at, all my friends had been shot at or were shooters?   How would my life be different? Pope Francis said:

Each one of us is capable of doing the same thing done by that man or woman in jail. All of us are capable of sinning and making the same mistake in life. They are not worse than you and I!

I have not committed a crime which could land me in jail. But I’ve been so guarded from making mistakes like that. Let’s say that I commit sin 30% of the time (I had a tough time coming up with a number so let’s go with that).  That means that three out of ten times I’m turning away from God.

What if for those mess ups, instead of being in my safe little apartment, I was in a neighborhood like Dahvie’s?  Personal choice is a big part of it, but I personally choose to do all kinds of evils. I haven’t had the same opportunities for evil as Dahvie.

They haven’t had the opportunities that I have had of not doing something stupid and ending up in prison…This makes me cry inside. It is deeply moving.

“I had failed to love that child…”

From the start, Dahvie was vulnerable with me, but I put up walls.  I’m very guarded. It took me months to open up to him, to share with him about my life.  Finally I sent him this:

My period is late.  I think I might be pregnant.  Which, to be honest, I don’t know how I feel about it.  I had a miscarriage a couple of months ago, and that process was tough.  Like, the whole thing from start to finish.

The pregnancy was a total surprise, and I really struggled to be happy about it.  It just was so not my plan, so much not what I wanted my life to be. I wanted my independence for a little longer.  Which I was ashamed about because I knew that I was being called to love that innocent little life.

And then, when I had the miscarriage, I was heartbroken, because I had failed to love that child as much as I should have.  I wanted to learn how to love the child (my husband named her “Poppy”), and I lost that shot. Seems like I might have that shot again.

I was in a really broken spot.  I had failed, I was wounded. I needed true rehabilitation in my heart.  Pope Francis underscores the need for rehabilitation, saying some people:

…do this in their own homes and in their own professions. Others, like you, do this in a prison. But all of us, all of us — anyone who says they do not need to go through a process of rehabilitation is a liar.

I needed something that Dahvie knew well.  A process of rehabilitation. A time of focus and change.  I could do this hidden in my home, but he does this behind bars, every day.  Perhaps this is why his response was moving, filled with understanding and care:

I’m confused at your reaction.  I thought you was ready for a football team of kids? Haha you thought you was.  But you was really scared. That’s how it be for everybody who think they ready for a responsibility whole time when the situation present itself we freeze up.  Get nervous. Don’t worry that’s normal. Love always grows so don’t think different. I’m sorry y’all had a miscarriage. God knows best and your chance will come again.

Pope Francis says that those in prison:

…are serving a penalty, a penalty for a mistake committed…But let us not forget that, for punishment to be fruitful, it must have a horizon of hope, otherwise it is enclosed within itself and is only an instrument of torture, it is not fruitful.

God never encloses us in our sin and brokenness.  He always gives us a horizon of hope, a chance at forgiveness and true change.  In the face of Dahvie’s broken world and mistakes, in the face of my miscarriage, Pope Francis says it best: