One of my Protestant friends commented one day about the Eucharist. From his standpoint, Jesus’s “Do this in memory of me,” only implies that participating in the Feast of the Lord should be done to remind you of Jesus if you forget him. His thought process is that Jesus is never far from his thoughts, so he has no need to participate in the Great High Feast to remind him of Jesus. At the time of this conversation, I was struck dumb.

Since then, we’ve celebrated the Lord’s Supper on Holy Thursday, Good Friday, Holy Saturday, and the biggest of all Easter Sunday. During the readings for these days we have been reminded of Jesus’s desire for us to imitate Him. We have also had several readings of Jesus’s visitation after His death. Each time Jesus appeared there is at least once commonality: the Breaking of the Bread, also known as the Eucharist. Most often, the disciples did not recognize Christ until this vital Sacrament. It wasn’t that the disciples had forgotten Christ since His death. Instead, they were so excited about His life, death, and Resurrection, they filled in a stranger on the road with the wondrous story. Christ had His reasons for cloaking Himself from them until He broke bread with them–He wanted them to associate the breaking of the bread with His True Presence. By the words of Scripture, the disciples understood this without a doubt. The Man breaking bread after Christ’s death was the same Man that broke the bread prior to His death. However, that man was not a simple human; He was truly God.

Some of our Protestant brethren discount the Eucharist as a mere symbol. While some sections of Scripture are taken literally, for some reason, Jesus’ words, “This is my body… This is my blood…” are taken as figurative. From a historical perspective, it was clear to the early Christians and even anti-Christians that the Eucharist celebrated was indeed meant to really be Jesus’s body and blood. Jews at the time were very familiar with symbolic meals: Passover Seder, Rosh Hashanah, Hanukkah, etc. The Jews recognized these symbols, but also realized that Jesus was different. In fact, in John 6:50-60, Jesus chastises the disciples, Pharisees, Sadducees, and many other of His followers by proclaiming that His flesh was real food and His blood real drink. Many left Him at that time because it was too difficult to believe and even more difficult to practice that the Eucharist was really Jesus’ Body and Blood. If He were speaking figuratively, it would not have been difficult to believe or practice, because bread is just bread and wine is just wine when symbolic. After Jesus’ death and Resurrection, the early Christians were persecuted as cannibals because even their enemies knew the now-called “symbolic” meal of the Eucharist was no symbol, but instead “true food and true drink”. Jesus took a hard line against those who wouldn’t or couldn’t accept that in order to achieve Eternal Life, one must eat His flesh and drink His blood. As Catholics we are faithful to this exhortation from Christ. We literally believe He is present in the small wafer and wine once the words of Consecration are spoken. We also take Him at His word when He commanded His disciples in that upper room to “Do this in memory of Me.”

Each time Jesus visited His disciples prior to the Ascension, He blessed and broke bread with them. At the first instance, the breaking of the bread is just another way of Christ proving He is indeed alive again. A ghost or spirit has no need or ability to eat real food or drink real drink, yet Christ did both. His consumption of food was even more vital and telling than presenting His wounds to Thomas because none of the disciples had tested Him in His new form, yet they instantly recognized Him through the Eucharist. Thereafter, He had no need for further proof, however, He continued to bless the bread and wine at table. Immediately after these actions, the disciples recognized Him. Even in the Acts of the Apostles, the Apostles gather and break bread together. The newly baptized “were persevering in the doctrine of the apostles, and in the communication of the breaking of bread, and in prayers.” (Acts 2:42) If the breaking of the bread, the Eucharist, was not such an important aspect of early Christian lives, why does Christ only reveal Himself in this Meal?

All four gospel writers saw fit to include the Last Supper, first Eucharist, in their narratives. As a matter of fact, the Catholic Liturgy of the Eucharist comes from these accounts almost word for word. The Consecration repeats Jesus’s own words of blessing over the bread and wine verbatim to complete transubstantiation of bread and wine into the Eucharist. Catholics believe that the Eucharist is not simply a memorial; the sacred words of Christ allow the us to share in the Sacrifice at Calvary. Not only that, but we believe God lifts the curtain between time and space, so that, each time we share the Eucharist, we are not re-sacrificing Christ, we are present at Calvary. God allows His Faithful to participate in the Ultimate Sacrifice of His Son’s death each and every time Mass is celebrated. Each time we receive the Eucharist, we are joined ever closer to our Lord and Savior. This Communion is the reality of Jesus being the Bread of Life and the Cup of Salvation. By faithfully adhering to His commands to “Take and eat”; we not only show our obedience, but also nourish our souls with the Bread come down from Heaven. The Sacrifice of the Mass is the Sacrifice at Calvary. Why would anyone want to pass up this glorious opportunity? Why would anyone forsake Communion with Jesus or only partake infrequently? We do not know the day or the hour He shall come again, but every hour of every day, Christ is present in the breaking of the bread in a Catholic Church somewhere in the world. Shouldn’t we be like the wise virgins and always be prepared to greet our Lord through the Sacrifice of the Mass on a frequent basis? 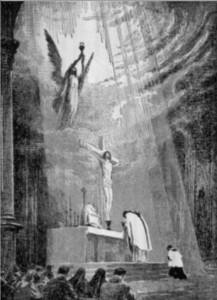 2 Replies to “Time Immemorial: the Eucharist”