Someone posted an article from a website I had not seen before about the very real consequences to the US financial infrastructure if the bishops call Obama’s bluff. Writer Ed Morissey with www.hotair.com covers some very startling facts {well, startling to those who aren’t aware of what the Church has done for this country} in his article that asks What if Catholic bishops aren’t bluffing?

Of all the Catholic Church provides in this nation, Morrissey focuses on Catholic hospitals in his article for the Fiscal Times and the impact Obama’s demands could lead to if he forces the bishops’ hands. According to Morrisseey, the Catholic Church has the most extensive private health care delivery system in the nation, or 12.6% of all US hospitals.

Also at risk of closure are Catholic schools, which account for 7500 primary and secondary schools, educating more than 2.5 million children, with nearly ZERO dollars used from tax payers. It has a 99% graduation rate and a 97% college placement rate.

What about Catholic charities? If Obama has his way, the country will be more reliant on the government than ever…most secular folks don’t even realize how much the Church takes care of the poor, educates ALL children {not just Catholic children} and cares for the sick {not just the Catholic sickies}. Imagine if we lived in a world where people understood what it means to be Catholic…that the term universal applies to them, whether they believe in the Church or not.

One thing I disagreed with in Morrissey’s article was near the end when he wrote:

“Surely, some will think, the bishops are just bluffing, and won’t purposefully create such a social disaster.”

Um, who exactly is creating a social disaster in this situation? I feel the need to address this point that it is not the bishops who have created anything, but are upholding Church teaching that has been around since the inception of the Church at the hands and promise of Christ. 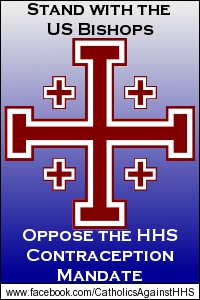 Can you compare the 235 year old history of the United States to over 2000 years of the Catholic Church which, by the way, has the divine seal of approval and protection by Christ Himself?

After reading some of the comments from this article, I felt the need to address a typical theme among secularists who don’t like the Church for any number of reasons and bristly Catholics who disregard Church teaching. Just because a few Catholic knuckleheads insist the teaching is wrong {some who are extremely vocal or have public platforms; some who list their Catholic “resume” before launching into dissent or even those who say they have spoken to a priest who has {wrongly} advised them that an immoral act is “ok”}, doesn’t change what Christ taught us and what He left us through the Church. This would be true for anyone. Say, for example, I disagree with some teaching of the Church. My disagreement doesn’t change the infallibility of the teaching. If it comes down to either me being wrong or God, I would do well to remember that I do not have the wisdom that God and His Church do. My understanding of the beatific vision is not just limited…it is distorted by the effects of sin.

Only arrogance would claim to know better than the Church…and God.

One last thought with respect to the comments of this article, which are typical of those who have an axe to grind with the Church. I don’t know why an article can’t be discussed based solely on merit. I see all of these angry comments that are filled with red herrings meant to derail what could otherwise be a wonderful exchange about the facts of what the Catholic Church provides to all US citizens, regardless of race, religion or creed. For some odd reason, bigotry against Catholicism seems to be the last acceptable bigotry around. It is ok to take sharp jabs at the shortcomings of the Church, going back into history to drag out old wounds. No knowledgeable Catholic would contest the wrongs done in the name of the Church or defend the actions of priests who have scandalized and harmed young children. But…I wonder how these things continue to weave themselves into the comboxes of articles that are simply trying to state facts.

It would be nice if secularists and grouchy Catholics would just take the article for what it is and discuss it without the usual vitriol and slams. It gets old.

To end on a positive note, I wanted to reference two non-Catholics who understand what it is that the Church both provides and what it is up against. Sam Miller, a prominent Jewish business man obviously understands what the Church does and says Catholics should be proud in a speech he gave in 2008 in reference to an article published in the Buckeye bulletin in 2002. In secular website comboxes all over the world, it is nice to know that not all of them vilify the Church. Many people see the problem with the HHS mandate for what it is, including one atheist who comments the following on Morrissey’s article:

The issue is not the Catholic Church. The issue involves the government.

Everyone knows the position of the Catholic Church on this subject. It has been around for a lot longer than the Left and the US. It WILL close the hospitals, etc., before it capitulates to Obama. You can take that to the bank. The question you must answer for yourself is whether you are prepared to inflict the misery on the poor that will ensue as a result.

I’m an atheist, but make no mistake about it, I will fight along side the bishops all day long against the bloody Leviathan in Washington. I’d rather see the Catholic Church burn every hospital in the country down to the ground than concede one millimeter of ground to les bâtards in DC and, if you were a true libertarian, you would feel the same way.

7 Replies to “The takedown if the bishops aren’t bluffing…”