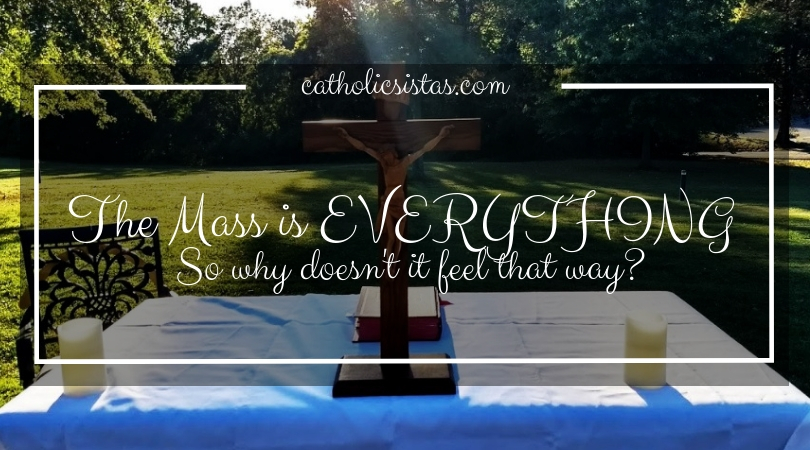 So, the Eucharist is kinda a big deal.  No crap, Sherlock. It would be the first sentence of “Catholicism for Dummies.”  And even after that they would add “duh.”

But let me be real.  This is a truth that I know in my head…but whether or not I feel it in my heart, or actually conduct my life to reflect this truth, varies immensely.  Some days I’m on fire for the Eucharist, for Adoration, for Mass. My heart is filled. I can’t keep from singing or crying or outpouring my mind onto the pages of my journal.

But sometimes…sometimes I let it slide.  I go a while without visiting Christ in adoration, even though I definitely have the time for it.  Thinking about the meal I’m making after Mass is a lot more exciting that the consecration. For the past few weeks I’ve hit a bit of a roadblock when it comes to this Sacrament.  My mind isn’t present. My heart certainly isn’t present. I’m bored. I’m apathetic. I’m distracted. I’m disengaged. The priest is going too fast. Too slow. I can’t understand him.  The family in front of me is too rowdy. They played the one praise and worship song I can’t stand. I’ve got this big project at work…

And it’s extra bad that I let this slide, because the Church could not be more straightforward about how important the Eucharist it. According to the Catechism:

“The Eucharist is “the source and summit of the Christian life.” “The other sacraments, and indeed all ecclesiastical ministries and works of the apostolate, are bound up with the Eucharist and are oriented toward it. For in the blessed Eucharist is contained the whole spiritual good of the Church, namely Christ himself.” (CCC 1324; http://www.vatican.va/archive/ccc_css/archive/catechism/p2s2c1a3.htm).

But if the Eucharist is the source and summit of our Christian life…shouldn’t I…get more out of it?  It’s the source of, well, everything. This may sound painfully obvious, but… shouldn’t I get things from sources?  It’s the summit of all I do as a Catholic. Shouldn’t it just feel perfect?

I recently read an awesome article, The Prayer of the Liturgy by Romano Guardini, and listened to a great podcast Praying Alone or in Community? from the Vici Mundum Show. Both really set me on the train of unpacking why I’m feeling separated from the Mass.  Bonus: they gave me insight into how I can change my mindset in order to reconnect a little better.

I took three key nuggets of wisdom that have helped me get my head back on straight regarding the Mass.  They’re not a complete explanation or cure to why people might feel disconnected from the Mass by far–but rather three things I had not considered that I wanted to share with my sisters. <3

1. The Mass expresses the Universal Church, not us as individuals.

Stated more plainly, the mass is everyone’s prayer.  And I mean everyone. Every member of the Universal Church expresses their prayer through the liturgy.  This WAY changes the focus of Mass!

In the article by Guardini (referenced above), he states that:
“The primary and exclusive aim of the liturgy is not the expression of the individual’s reverence and worship for God. It is not even concerned with the awakening, formation, and sanctification of the individual soul as such. Nor does the onus of liturgical action and prayer rest with the individual. It does not even rest with the collective groups, composed of numerous individuals, who periodically achieve a limited and intermittent unity in their capacity as the congregation of a church. The liturgical entity consists rather of the united body of the faithful as such–the Church–a body which infinitely outnumbers the mere congregation.”

So yes, a ton of words, but let me boil that down: Liturgy is not time for our individual prayer.  It isn’t even time for our local parish’s prayer. It is a bold, vibrant expression of our unity with the entire universal Church.

Yes, God reaches out to us in the liturgy–He reaches out to us at all times, constantly longing for our hearts.   And yes, our parish and ourselves individually should make a spot for our own prayers during Mass. But those prayers aren’t the point!

The Mass itself–and other forms of the liturgy–is our unique chance to pray with our ENTIRE CHURCH AROUND THE WHOLE WORLD.  Whoa.

I have received a ton of fruit from this paradigm shift–going to Mass as a chance to experience unity, rather than to quest for my own personal experience.

2.  The Mass must express the the full Truth, not just the parts that speak to us.

Some images of God, some mysteries, some saints, are going to resonate with our hearts more than others.  Maybe you’re more of a Good Friday person than a Holy Thursday person. Maybe Advent speaks to you in ways that Lent falls flat.  Maybe St. Therese is your girl and St. Teresa of Avila leaves your head spinning.

These are all natural experiences within our faith!  But what’s important to remember is that our Church is the fullness of all these elements.  Guardini points out that:

“If a prayer therefore stresses any one mystery of faith in an exclusive or an excessive manner, in the end it will adequately satisfy none but those who are of a corresponding temperament, and even the latter will eventually become conscious of their need of truth in its entirety. For instance, if a prayer deals exclusively with God’s mercy, it will not ultimately satisfy even a delicate and tender piety, because this truth calls for its complement-the fact of God’s justice and majesty. In any form of prayer, therefore, which is intended for the ultimate use of a corporate body, the whole fullness of religious truth must be included.”

Again, a lot of words–let me paraphrase.   Your heart might be SUPER moved by God’s incredible mercy.  Whenever there is a powerful reading about mercy, or the priest proclaims a wonderful homily on mercy, you can feel God’s presence, right then and there.

However, if the Mass were to focus only on certain things (God’s mercy, for instance), and neglect the rest of the picture (God’s justice), the mom of four kids sitting behind you, who’s heart is just wrapped up with imagines of God’s majesty, would be neglected.

What’s more, our hearts long for the fullness of truth.  If all we get is the same message of mercy over and over, but no justice, sooner or later our hearts will not be satisfied.

That means that sometimes–sometimes Father’s homily will fall flat on us.  And that’s totally ok–our hearts secretly hungered for that nugget of truth.

3. We expect too much of ourselves.

This final nugget of truth came from the Vici Mundum podcast, referenced above.  I’m going to paraphrase because it’s a little more difficult to transcribe from a podcast. (Definitely check it out though, awesome people with really thoughtful insight.)

One of the presenters expressed similar struggles as I had: not really feeling anything from the Mass.  Feel super disconnected. She mentioned that we can often get frustrated by this. But she noted that God is never frustrated with us.  He knows we’re human, He knows that we have a lot on our hearts. We might be expected more of ourselves from the liturgy than even God expects of us.

I loved this.  Because when I don’t connect with the Mass, I feel like something is totally wrong with me.  But that isn’t the case. God knows exactly where I’m at. He asks that I come to Mass, participate, and pray that my heart be open.  Other than that, it’s all in His hands. It doesn’t need to “feel” like everything. It just is, and I can rest in that.