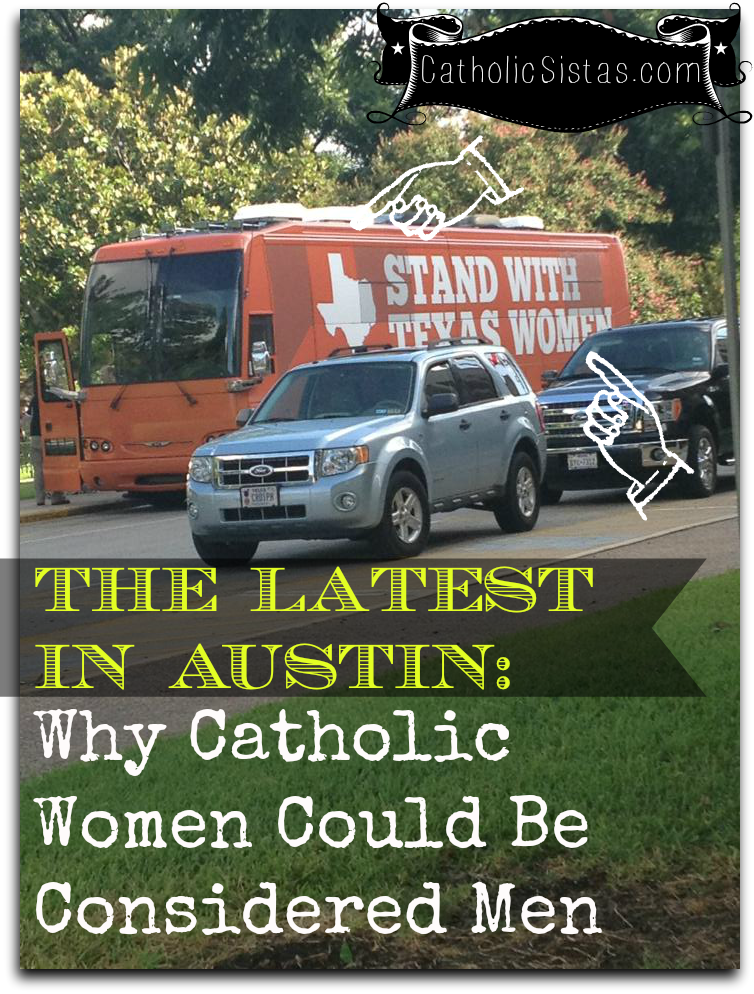 In the few days of going down to the Capitol in Austin, Texas, I have seen a lot that demands us as Catholics to continue praying. Hard. Offer up your sufferings, and fast. I wanted to share some observations I’ve made from personal witness and the witness of fellow friends who were at the Capitol.

1. Women are wounded. Their words, anger, and rage say as much. Abortion is controversial because one in three women have had an abortion and the rest know someone who has had an abortion. We are emotionally charged because it affects us to our very core.

The above footage shows a pro-choice woman who was not only rude and disrespectful, but verbally attacked the senators sitting on the panel. That’s not what testimony is. She was removed – loudly – from the testimony room, but how do you think the media responded? They praised her, which you can watch here, and gave her a platform to finish her angry thoughts. What does it say about mainstream media when they give half the story, praise this kind of behavior and miss an opportunity to actually explain what the bill does? Does that sound fair and balanced to you?

2. Pro-choice women demean men with sexist terminology – when men speak up for the unborn, they are labeled as “mansplaining” and the men’s opinions are quickly dismissed, even “muted” during their testimony. Can you imagine how women would respond if men created and perpetuated a campaign of verbiage that assaulted women’s true intentions? Would it be tolerated? Why do we allow their verbiage to remain unchallenged simply because it’s aimed at men? Because men are tough and can take it? And women can’t? I challenge the pro-choice movement to speak out against any words that tear others down who don’t agree, men OR women. 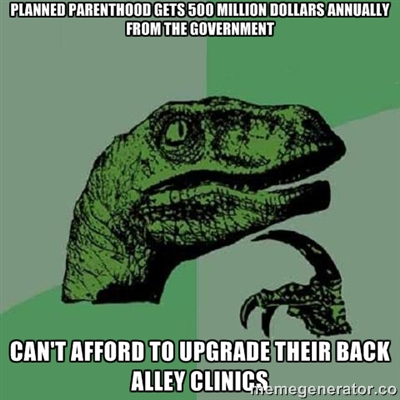 3. Pro-choice women say men have no place to speak; that they…and I will try to make this sound less crass than what I’ve heard…do not have the biological parts, as it were, to lodge a complaint against abortion. However, while listening to testimony, pro-choice women applauded men who gave testimony in support of abortion. Here is an example of the men whose testimony in favor of abortion they support. Friend and Catholic Sistas male contributor Devin Rose had this to say in response to the Bro-Choice article.

4. Catholic women – pro-life women – could be considered men. I quickly realized that, in their eyes, and according to their own faulty logic...I may as well be a man because my opinion matters as little to them as a man who champions for the unborn and safety of women. The only opinions the pro-choice side champions for…the only choice they want you to stand with is abortion. This is based on their own words, their own rhetoric, their own talking points.

5. With respect to this bill, Senate Bill 1 {SB1}, women and men who advocate against it are really saying “we want back alley clinics. We want more Gosnells.” Anyone who reviews the points of the bill sees that this is an opportunity to clean up the clinics. To this point, the cry becomes “the clinics will shut down because they won’t be able to bring them up to code.” They will advocate for keeping back alley clinics rather than demand they be brought up to a higher standard of care {whether I agree with their definition of care is beside the point in this particular scenario}. Here is a wonderful article written in response to Wendy Davis’ filibuster. This explains exactly what the pro-choice crowd is advocating for…with a twinge of satire laced throughout.

6. Where is all the 500 MILLION DOLLARS that Planned Parenthood getting from the government going if they aren’t properly allocating it to these clinics to bring them up to code? Painting charter buses the same color of my beloved alma mater? Paying for a tour across Texas to garner support? They can’t have it both ways, and complain with a pocketbook with that much money just from the government. They can’t say they don’t have the funds to improve these back alley clinics and then turn around and watch Planned Parenthood Action Funds pay for a charter bus and tour. Additionally, they are footing the bill to fly in celebrities, paying people to support their cause {Craigslist ad}, bringing in bands to “warm up the crowd” and take pro-choicers on the road to “raise awareness” using the charter bus.

Guess who is paying for that? Your tax dollars?

What do you think of all this?

7. I came across this article about 5 myths about pro-lifers and how to refute them that is a wonderful read. I encourage you to read it and share.

8. Here are a couple of videos of the women and men who crashed the pro-life rally Monday evening on the south steps at the Capitol. I was present, but left when I saw a stream of orange shirts move through the pro-life crowd who was singing. A friend who was present sent me some more video of the orange pro-choice presence.

9. Insult to injury. After seeing this article from the Austin American Statesman posted, I was initially upset that they referred to a Eucharistic procession to the Capitol as a “rosary procession.” I think what made me more upset was referring to those who were walking to the Capitol as “anti-abortion.” I dunno…I need more time to think about which makes me more angry. Not surprised…never surprised, but always disappointed that secular media can never just get the facts straight. You can see an example of their verbiage in this particular photo.

To see an entire slideshow of the procession, please visit Arlen’s website here. Thank you, Arlen, for your amazing collection of photos of this event!

10. Students for Life, a group of 50+ college students made the trek from DC, picking up students along the way, have been in town the past week. After striking an initial deal with the YMCA for showers, pro-choice supporters caused a ruckus that bullied YMCA into denying SfL showers, even though staffers had no complaints and said the students were polite and respectful. YMCA issued a statement that said they did not want the political issue to spill into their facilities. You can read it here. The verbiage is so ambiguous that it leaves the reader thinking that somehow the SfL group were the cause of the incident. I would like to challenge YMCA Town Lake that they did, in fact take a stand by caving to unfounded  and baseless complaints. When Christians and Christian organizations won’t “take sides” in the name of “pleasing customers” by remaining neutral, then they have already taken a side. Catholic Sistas will be working on a feature about this in the coming days, so stay tuned.

11. Pro-life folks gathered last night at the Capitol to glow blue. Here are a couple of pictures from the evening.

12. Know anyone in the Diocese of Brownsville? Please pass this info along. 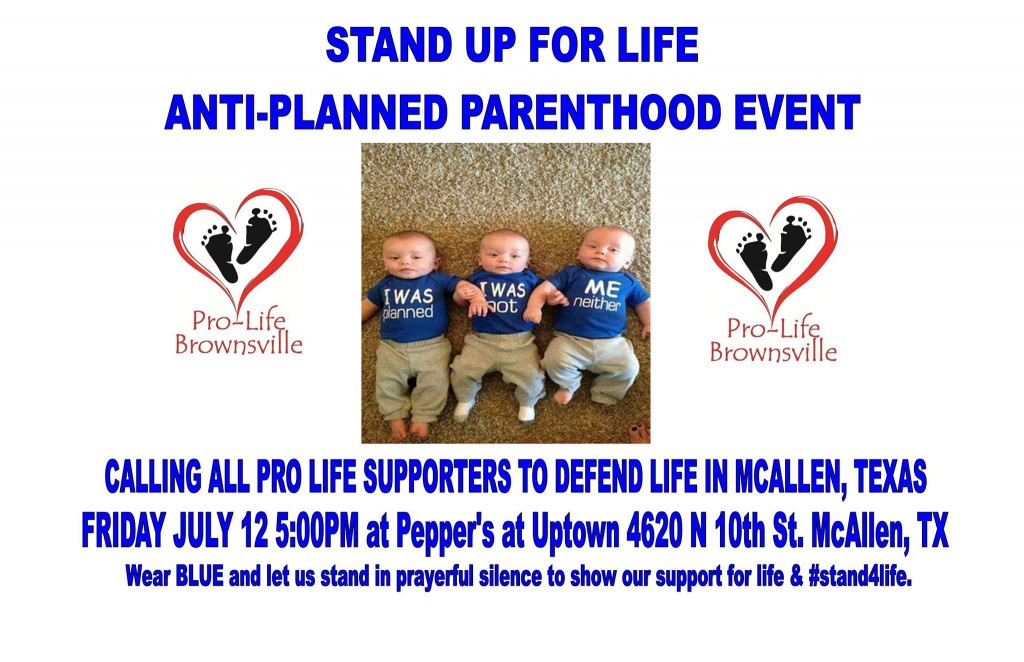 13. CALL TO ACTION – want to help someone in need? Yesterday, a JPII Life Center volunteer who counsels women in crisis pregnancies talked with a woman who is currently 17 weeks pregnant and abortion minded. She is currently being evicted and we would love to secure her place of residence. She recently found out she is having a baby girl. If you feel moved to help, please e-mail lethyluvsstacey@gmail.com for more details on how you can help. Prayers are always needed. Thank you, friends.

One Reply to “THE LATEST IN AUSTIN: Why Catholic Women Could Be Considered Men”