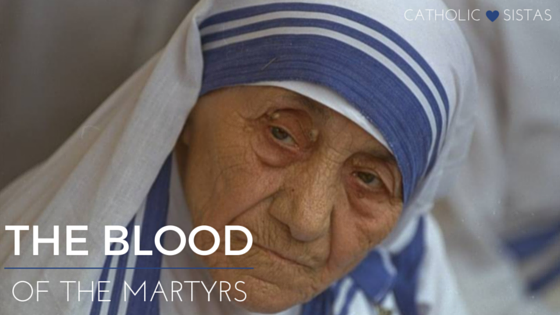 Today, as the Catholic Church celebrates Holy Thursday, and with that the institution of the Most Holy Eucharist and the Priesthood, most of us will be able to practice our Faith in peace. Our constitutional right to freely exercise our religion is a blessing we often take for granted.

Unfortunately, many Christians throughout the world do not enjoy the right of free exercise of religion. Today, let us remember four Yemeni martyrs.

On March 4, 2016 ISIS terrorists attacked a retirement home in Yemen, killing 16 people. Four of their victims were nuns with the Missionaries of Charity: Sister Judith from Kenya, Sister Anselm from India, and Sister Marguerite and Sister Reginette from Rwanda . These brave women were brutally murdered: they were tied to trees, shot in the head, and then had their heads smashed in.

One nun, Sister Sally, survived the attack by hiding behind the door in the refrigerator room. The terrorists knew there were 5 nuns at this location, but they had only killed four. They searched the property for the missing nun, including checking in the room she was hiding in at least three times, to no avail. She miraculously escaped, and shared her first-hand account of the martyrdom of her sisters.

Fr. Tom Uzhunnalil from India, was kidnapped by ISIS in the attack. He has not been found yet, although rumors about him being tortured seem to be unfounded. It has been reported that Fr. Tom was in the Chapel praying after Mass, and that he consumed the remaining consecrated hosts to prevent the Body of Christ from being desecrated by the terrorists. This persecution of Christians is just the latest of many perpetrated by ISIS.

The brutality of Christian persecution by ISIS has been recognized by Secretary of State John Kerry as an act of genocide. This is a systematic targeting of Christians, alongside other nonadherents to ISIS’s violent version of Islam, precisely because of their faith.

As we celebrate the most sacred events of the Triduum, let us remember and be inspired by these modern day martyrs: their zeal for the Faith and desire to bring Christ to foreign lands, their faithfulness in remaining in dangerous territory in order to serve the elderly and disabled in their nursing home, their courage in dying for Christ, and ultimately their final reward in Heaven. Let us also pray for Fr. Tom’s release and Sister Sally’s safety, as well as the safety of all Christians throughout the world.

As Pope Benedict XVI said in 2011, “Then, as now, the blood of the martyrs, their tangible and eloquent testimony touches the human heart and makes it fruitful, able to put forth a new life in itself, to accept the life of the Risen Christ to bring resurrection and hope to the world around him”.

May the heroic actions of these four Yemini martyrs strengthen us this Holy Week and bring us ever closer to Christ.

One Reply to “The Blood of the Martyrs”