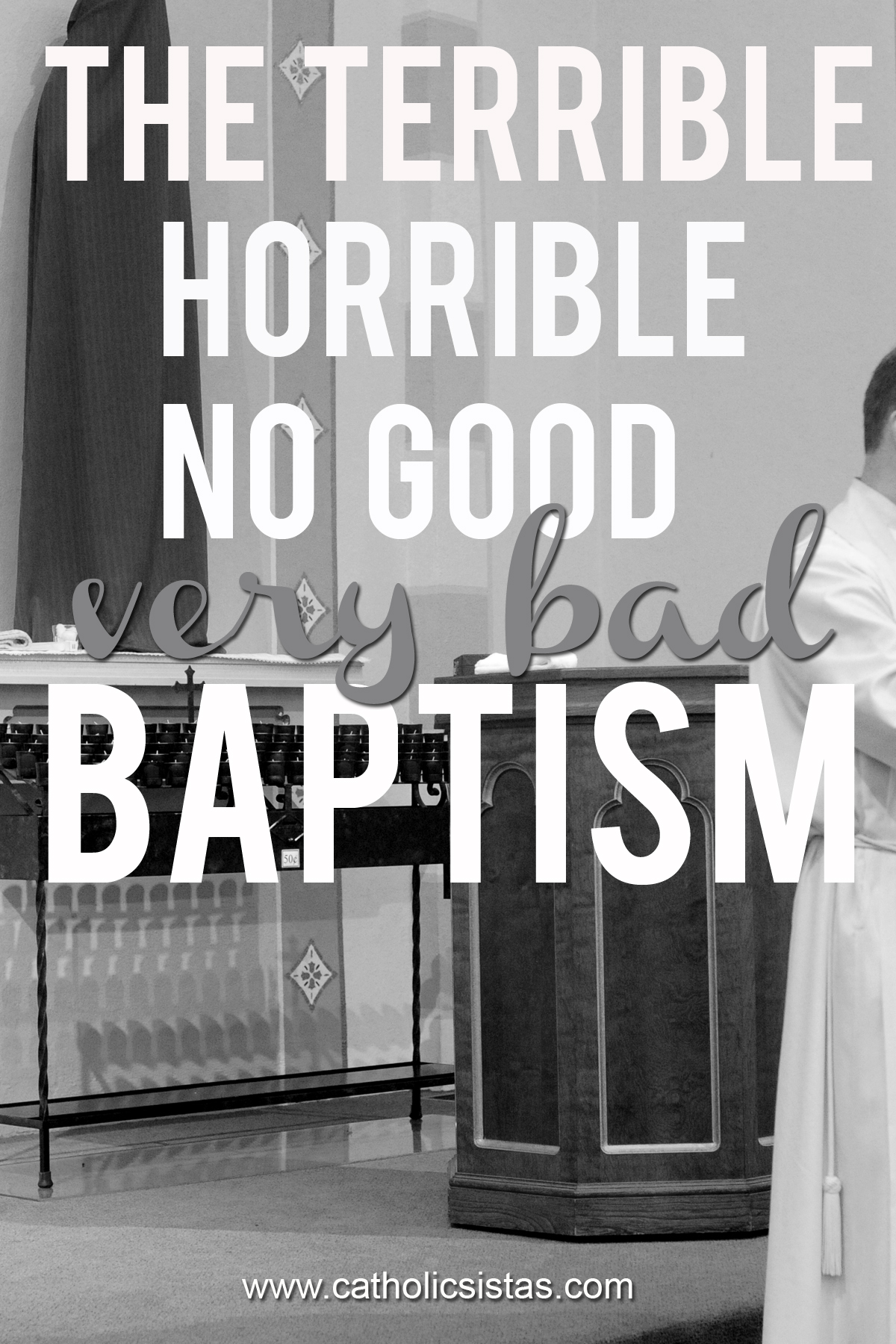 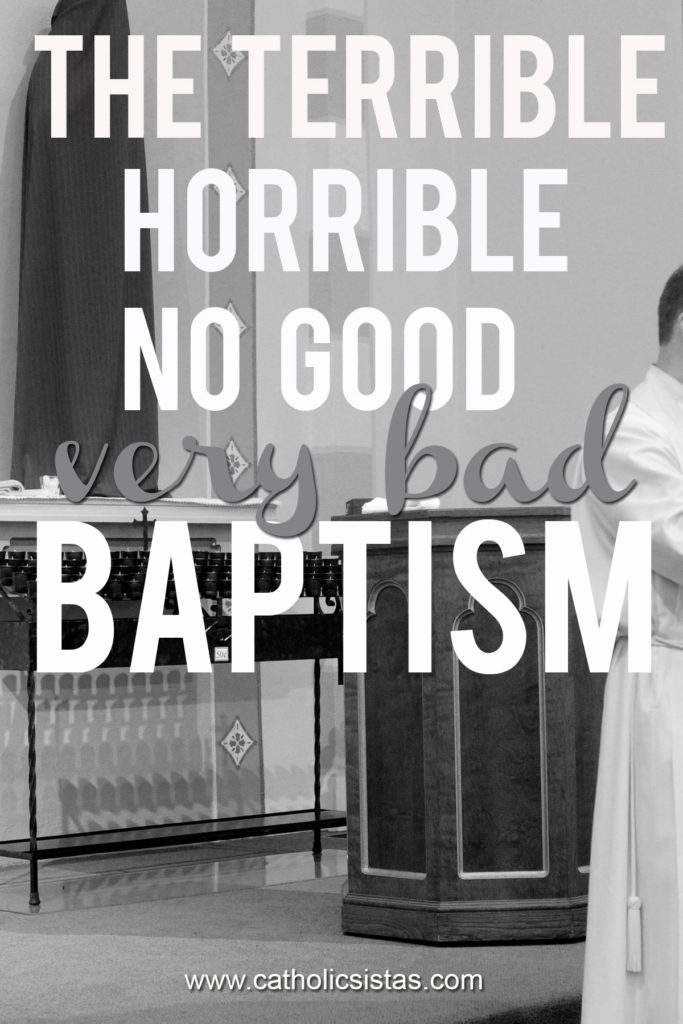 Our fourth child’s baptism was not going to be impeccable. I knew that from the start. But the Lord had sanctified me since the days back when my focus lied solely on the letterpress invitations, the picture perfect outfits, and the catered food for our first child’s baptism.

None the less I was distressed. There hadn’t been an extra moment to do a photo shoot and have the invitations delivered in time. No new baptism garments had been ordered.  Instead we were re-using the outfit from our previous boy. My own clothing selections were dull at best.  I had the choice of one of two dresses in my closet that fit.

But I still wanted to celebrate our newest guy’s special day with a little, very simple, fan fare. The week of the baptism, I sent out a text to our immediate family with the details of the date and time of the baptism and that we would be having a meal at home following. I was content with this small amount of celebration.

But less than 48 hours after I sent my text invite out, I was replying and un-inviting everyone because the three big kids had fevers and appeared to be coming down with something. I hadn’t planned an elaborate menu… in fact, I hadn’t even bought the groceries, thanks be to God… but the evening before Henry’s baptism, as I was rocking him to sleep, I was crying out to God in prayer for peace about the events that were being placed in front of us. I went to bed with a heavy heart but knowing that I had poured myself out to Him and that He would lead me.

Saturday morning came and while it was evident that not only would we not be having any type of celebration, we would also not be attending Mass. One fever appeared to be lessening but one was raging its full force upon our four year old son. Here He was sending me a peace and confirmation that, indeed, I had made the right decision to cancel the festivities.

Late afternoon rolled around and I spent my time ironing clothing for everyone to wear and pushing fluids to everyone lying on the couch. Hubby was off to Mass by himself and the plan was for me to bring the four kids in time for the baptism. I put on my old standby, the purple maxi dress with the hole in the front, with peace.  It wasn’t pretty. It didn’t make this day feel special. And to top it off I was wearing a jean jacket as a shoulder cover. Ick.  Blah.  And then dressing the boys. They ALWAYS fight me about putting on dress clothes. The buttons, hot fabrics and stiff shoes are not their favorite. Neither is sitting quietly. So instead of a battle I chose to embrace peace and let them wear jeans and a dress shirt.

I told the kids to load up into the van and I realized that not only did I not have a camera I didn’t have anyone arranged to take the photos. This was a new low as I have been a photographer in the past and hold every photo of a milestone near and dear to my heart. Improvision was the only acceptable answer and I grabbed my DSLR, the tripod and the remote and headed out the door. Immediately I knew the only reason I so quickly thought of this was His divine mercy shining down on me.  Because I can count on one hand the times that I have used the camera with the remote. To have it where I could find everything and all batteries were ready to go was truly a miracle.  I instantly knew that this night was in His hands and that He was with us.

The trip to church was quick and uneventful. There was no fussy baby or spit up on the formal clothing. Amazing. We made our way into the church and met the four guests that were in attendance.  My husband’s parents, whom were there to be Henry’s godparents, and my husband’s grandparents.

The church was quiet. I set up the camera on the tripod and focused it on the baptismal. Our oldest boy, who was sick in every sense of the word, sat quietly next to me and looked over his beloved baby brother whom he affectionately calls “Junior.” And he knew that he couldn’t touch him or hold him even though he so badly wanted to. My heart melted when his sick, brown, watery eyes caught mine. I knew that he didn’t even feel like being there. And in that moment I decided to let him hold the remote and be my photographer. Yes, the perfectionist in me had fully lost her mind to allow the four year old to photograph the baptism but I knew it was what I needed to do for him to feel included. His eyes lit up and he gladly took the remote from me and snapped a few test shots.

Our priest came and welcomed us and had us sit in the pew directly in front of the baptismal. As he handed out the booklets for everyone to follow along with an all knowing peace came over me followed by joy. Our son was being welcomed into the church! Everything that the Lord has called me to do as a mother was right here in front of me and it was monumentally emotional thinking about the significance of Christ coming into our fourth gift and the massive responsibility that was in my arms to raise him up in the faith.

Somehow I gulped down the lump in my throat and kept ahold of the mist that my eyes were trying to make into tears.

The oil on his heart.

The pouring of the water. Henry laughed.

The placing of the white garment.

His candle being lit.

The prayers over the mother and father.

I know I am becoming a sap in my ‘old age’ but I truly believe that the Holy Spirit is working within me, refining me, to truly see my faith and to experience it in ways I never thought possible. Thank you Lord for the worst, most very bad baptism that I could have ever imagined. Because in the disappointments You showed me Your magnificence and the monumental event that baptism truly is.

Welcome to the Catholic Church Henry Victor. As I hold you close tonight and smell the wonderful Chrism on your head I pray that you always keep the faith and keep close to Him. Your mama is so proud.

2 Replies to “The Terrible, Horrible, No Good, Very Bad, Baptism”