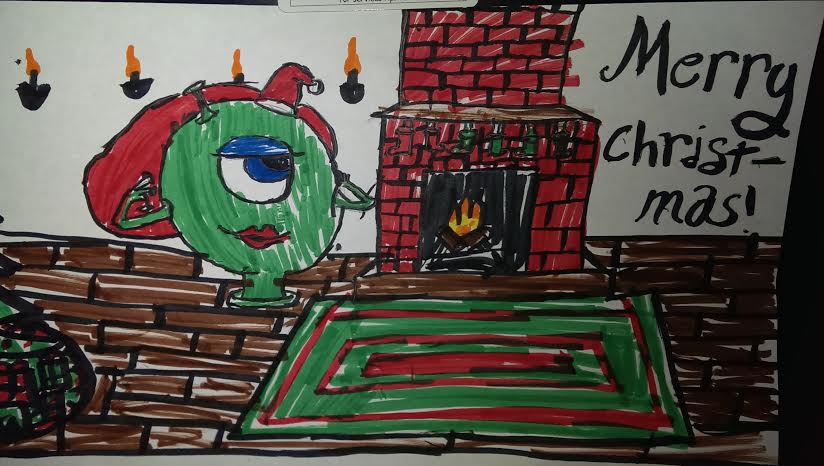 1. Give God the start and/or the end of your day. Make a decision to get up 30 minutes earlier in the morning to pray and read your Scriptures or start your evening routine 30 minutes earlier so you’re in bed talking to God and the saints before you’re too tired to think.

2. Choose to believe the best about someone who slights you, lets you down, or hurts your feelings. If your husband forgets to take the trash out and you have to in the dark at 20 below, it’s because he’s selfish and doesn’t care about you. If your kids leave their socks on the floor, it’s because they’re disrespectful. If your friend forgets the anniversary of your miscarriage, it’s because she’s self-absorbed. Choose instead–consciously, deliberately–to believe that your husband was exhausted after work, which is why he forgot to take out the trash. Or that your child choose the better path by making you a Christmas alien picture (true story) instead of cleaning. Or that your friend is probably just overwhelmed by everything on her own plate. Even if you have those initially uncharitable thoughts, redeem them by giving people the benefit of the doubt. Love is a choice, not a feeling.

3. Sacrifice a sensual pleasure that you enjoy. For me, I’d sincerely rather have a root canal (and I’ve had four) than give up my morning coffee. What’s your pleasure? Chocolate, a cup of tea in the afternoons, watching your favorite sitcom or drama? Sacrifice it and watch yourself take one step closer to being free of earthly attachments.

4. Stop by any Catholic church that’s open, pop in, and say hello to Jesus in the tabernacle. During a recent discussion about Marian apparitions, a man on Facebook said pointedly, “Jesus sits alone in tabernacles everywhere, yet people spend thousands of dollars and copious time running around the world in search of miracles.” So what if you only have five minutes (or two) to spend before the Blessed Sacrament? As beautiful and precious as it is to receive Jesus in Holy Communion, the beauty of adoration is that we offer praise and love to God without expecting anything in return.

5. Let one household chore go and spend that time instead with your spouse, children, or family member. Last night I sat on the couch with my family and watched an episode of Murdoch Mysteries. I did that despite the fact that our living room and kitchen were a wreck and I thrive psychologically on order. I knew it was the right decision when my daughter cuddled up to me and said, “It’s so weird to just sit here with you, because you never just sit down. You’re always such a busy bee, Mom.”

6. Suffer with Jesus–and with Jesus alone. We all have those moments each day when the body gives out. Instead of complaining and calling attention to your headache or fatigue, offer it to Jesus as a way of suffering in union with Him on the Cross–silently, as He did. God, after all, is outside of time and as we witness each Mass, Christ’s sacrifice is eternal. Show Jesus you have compassion for Him (which means “to suffer with”) by sacrificing the sympathy and accommodation that would come from complaining about your difficulties. Imitate Him and in doing so, share in His Passion in your own tiny way.

7. Memorize a Bible verse. For the novice, there’s this short list from A Catholic Notebook. Like a challenge? Order 150 Bible Verses Every Catholic Should Know by Patrick Madrid. (There’s even a Kindle version so you can get started today). Maybe one day you’ll be as impressive as these nuns, who “whooped” a group of Protestant men on Jeff Foxworthy’s “American Bible Challenge” TV show. (Watch the video; it’s worth the 90 seconds.)

8. Befriend one new saint. It would be rude to ask a person for a favor before you know him, so take five minutes and introduce yourself to a new saint today through Catholic Online’s exhaustive list. If you’re quirky like me, you’ll gravitate toward the patrons of unusual causes, such as St. Gertrude of Nivelles, who can help you with your fear of mice, or St. Polycarp, patron against dysentery (which is definitely scarier than mice). Want to guard your children against the culture’s moral decline? Then befriend St. Fiacre, the patron of sexually transmitted diseases. We’re blessed with countless heavenly brothers and sisters who are anxious to help us get to heaven. So get to know more of them!

9. Do something nice for someone you can’t stand. (Or who just gets on your nerves.) Send him a nice email or drop a card in the mail to her. Take her dinner, if you can swing it. If you want to make it extra sacrificial, arrange to spend time with the person. Even if the person is so toxic you can’t have her in your life, you can always pray for her or have a Mass offered for him. (I’ll be taking a batch of cookies over to Alec Baldwin later.)

10. Give alms. Thanks to debit cards and the Internet, you can donate to a worthy cause in five minutes without even leaving your house. (And in pajamas, at that.) It doesn’t need to be substantial; most charities are grateful for even the smallest donation. Can’t spare even a few bucks? Go through your pantry and donate a few canned or boxed goods. Go through your stash of baby items and donate a bag of extras to the local pregnancy center. Purge extra clothes from the closet and donate them to a charitable thrift shop. When you’re done, put the bag in the front seat of your car so you won’t forget to deliver it the next time you’re running errands.

5 Replies to “Ten Ways to Grow in Holiness Today”