Teaching the Love of Writing in {Catholic} Homeschooling 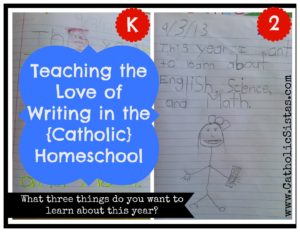 Writing has always been a priority in our Catholic Homeschool from when we first started, I’ve always provided our children with papers and writing utensils of all kinds.  I have basically been very informal about it.  Always making sure that the children from the moment they can grasp a spoon that they are given ample opportunities to explore with writing.  Yes, I do start them out very early.  It is a very natural approach to teaching the love of writing to my children, even if at the beginning the writing utensils spends most of its life drowned in drool.  At first, this is a messy task but eventually my children learn that putting marker, pen, chalk, crayon, or colored pencil to paper, chalk board, dry erase board, notebook, or construction paper means we write letters and then words which together turn into sentences which eventually will make paragraphs with wonderful stories.  Equally important is matching these words with pictures, beautiful colorful ones and even simple pencil drawn ones.  We are constantly writing and my children don’t even notice that I am sneaking in some very important future writing skills in to them from early on.

As we started day two of this, our fifth homeschooling year, I am able to see how much this has helped my children be comfortable with writing.  This year I am formalizing our writing a little more as my eldest little is in the third grade.  I do realize when I was a school teacher children in the first and second grade were composing paragraphs, which is fine but I wanted to try a different approach.  In my way of teaching I wanted the children always exposed to writing and drawing.  As a Reading Specialist I thought it would be a great way to help children with reading comprehension in the future.  I have noticed that when I read to my children they are constantly examining the pictures on the page as I read the lovely little stories they have been exposed to.  This, in turn, helps them create images in their minds as they are reading to better understand and remember what was read.  It is a known fact that children who write before they read become better readers than those who do not.  So, to me, providing so much writing so early is a win-win situation.  (This does not mean I am not providing reading opportunities either, reading to my children is equally important for both reading and writing.) 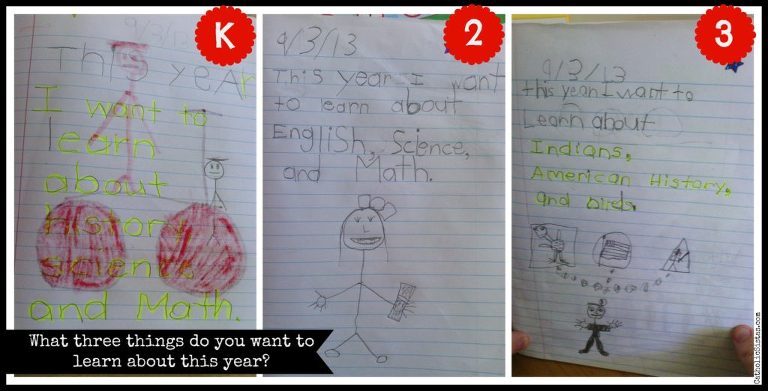 When I taught in the schools, whether public or private, I always started my day or class period with a journal.  This always helped students settle in to the day or class and also was a way to get them thinking about what we were going to learn or had been learning.  So today, while my children where doing their morning journals I decided to take pictures and show you what they are doing.  Mind you, it is the second day of school for us so I am giving them A LOT of support until they get back to the swing of things. I will break it down by age group so you can see what they are up to.  I do not have children in some stages so I have asked Martina if I could use some of the art work her beautiful children have done (and she has shared on Facebook).

This is the period when young children are just figuring out that their movements result in the lines and scribbles they see on the page.  These scribbles are usually the result of large movements from the shoulder, with the crayon or marker held in the child’s fist (think of the caveman grip).  They do no have the pincer grasp down too well though probably they can be encouraged by giving them cereal or little objects to pick up and eat. At this stage children love the way the crayon feels, the smell of the paint, the squishiness of the play-dough.  Child makes random contact with the paper and exhibits little muscular control.  This is the beginning level at which your child scribbles.  You may not be able to tell what the picture is about, but it’s important to praise your child’s beginning drawing.  Some children do not enjoy this stage early on and need more time to be accustomed to the sensations of play-dough or even finger paint.  The key is to constantly expose them to it until it becomes familiar.

What to Teach: Encourage continued exploration of making marks with crayons and chalk. Allow time and materials for gross-motor and fine-motor development in various ways throughout the day. 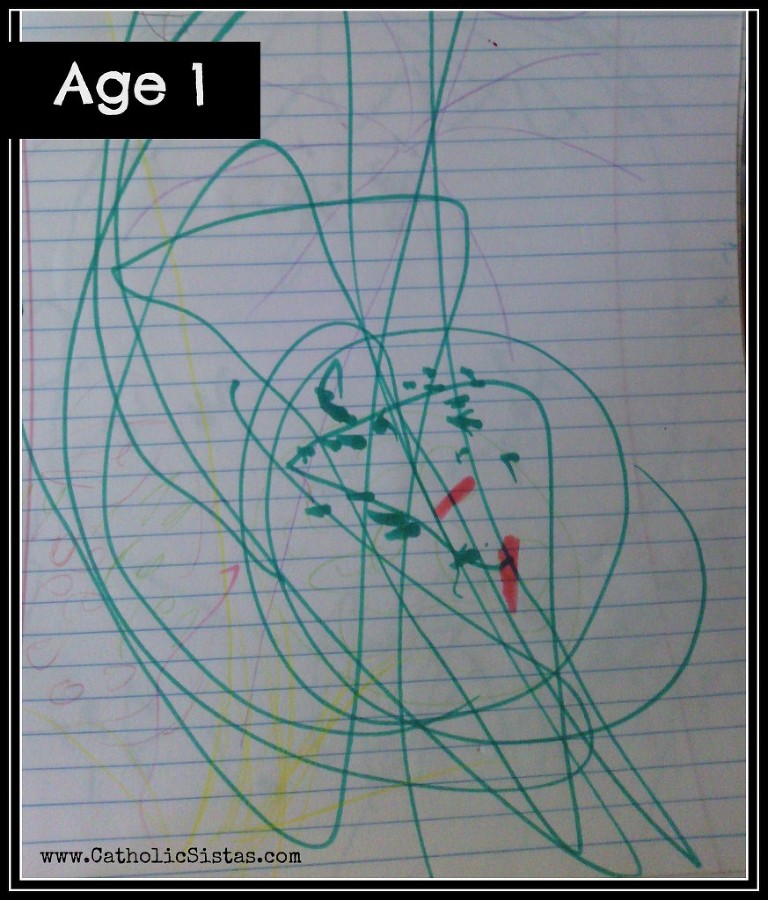 What seems like random scribbling is actually the beginning stages of writing. It is important to positively praise children at this early stage.

You have probably seen your little toddler make repeated circles and lines and lots of curves.  This is because they are developing better control over the muscles in their hands and fingers, their scribbles begin to change and become more controlled.  Toddlers may make repeated marks on the page such as open circles, diagonal, curved, horizontal or vertical lines.  Over time, children make the transition to holding the crayon or marker between their thumb and pointer finger.  Pretend writing is produced as child scribbles across paper in a linear fashion. At this stage they begin to demonstrate an increase in muscular control.

What to Teach: Recognize the value of child’s writing. Show how to secure paper with the other hand.  Also expose them to blocks, puzzles, and self-care tasks allow development of the arms, hands, and wrists.

This is what this stage may begin to look like: 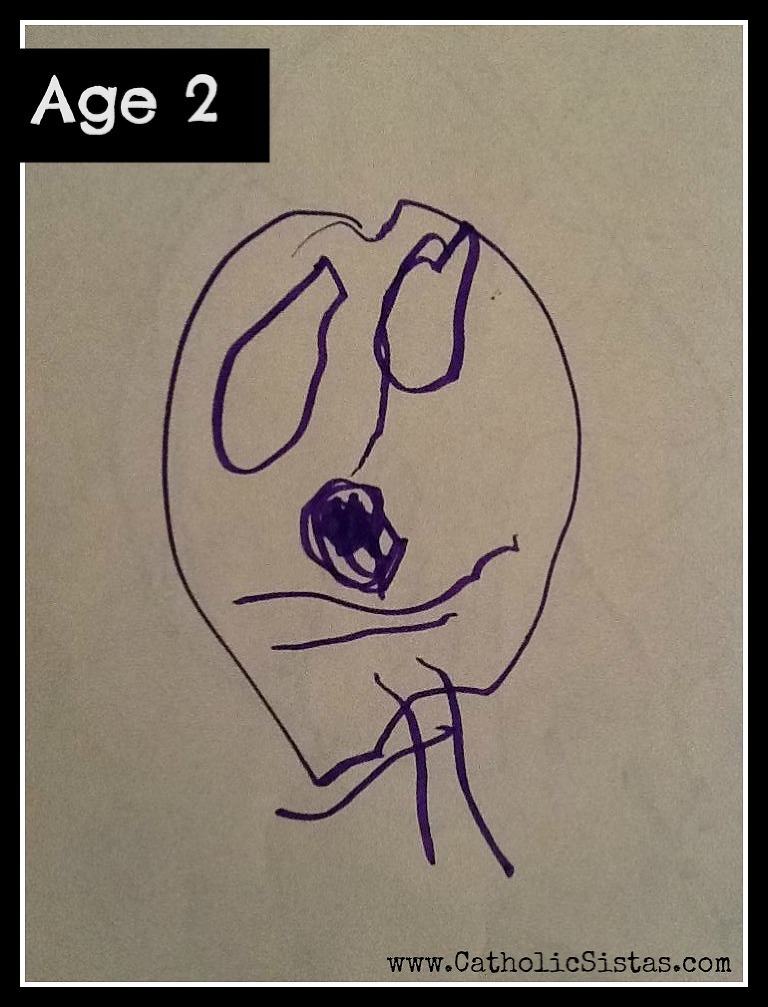 One of my favorite stages of writing. Details begin to appear and this drawing of a person looks more like Mr. Potato Head but is actually demonstrating very well developed writing skills because of the details the child is putting into the picture. 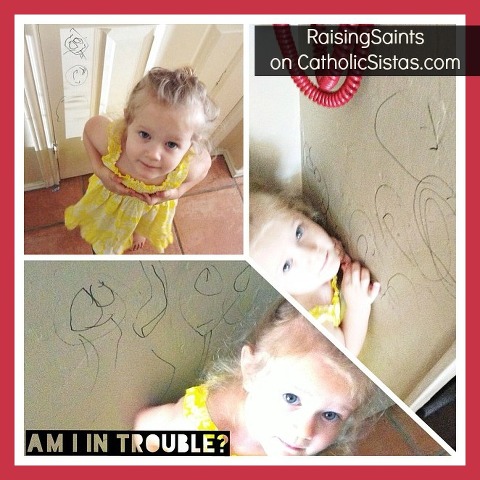 Yes she wrote it on the wall but here is a prime example of this stage of controlled scribbling, if you look closely you will see some defined people (circle, eyes, sticks for legs).

Writing includes letter-like forms, often arranged in groups and word-like strings. Mock letters may include characteristics of familiar letters but may be misshapen, combined, reversed, or inverted.  Often they look more like shapes than letters but are beginning to look more like letters than not.  Children often write for a purpose, and a distinction is made between drawing and writing.

What to Teach: At this stage, letter recognition is important. Also make sure you are teaching basic writing strokes and directions. Demonstrate a good writing grip of their pencil, crayons, or markers.  A bad habit is harder to break than to teach a good habit from the start. Working on an easel, stringing beads, and doing simple crafts continue to develop fine motor skills.  Dot markers are also great to use at this stage as it increases hand and eye coordination. 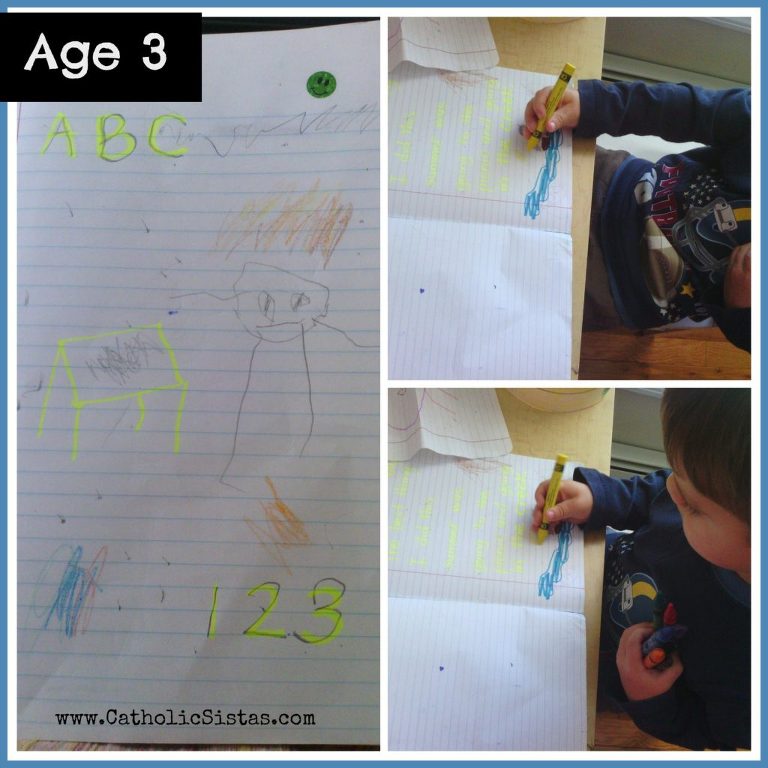 This stage the child does more precise scribbling and some resemblance of letters and numbers begin to appear. The child is able to trace more and is able to produce more defined pictures.

Stage 4:  Pictures of Objects or People

At this stage the child is able to draw things and already understand that writing is made up of lines, curves, and repeated patterns.  He tries to imitate this in his writing and while they are not actual letters yet, I can already see components of letters in his drawings.  He does lots of curves, circles, dots, and lines.  At this stage I ask him what he drew and he tells me and I write it for him as well.  This comes AFTER he has already done his “masterpiece.”  Sometimes children are between stages because he isn’t clearly planning out what he is about to draw or write, it just happens and then he tells me what he did.  Once he is able to plan out what he is going to do, then he is closer to the fourth stage of writing.  This is what his journal looked like when the topic was, “What do you want to learn this year?”  At this level, he begins to draw a somewhat recognizable picture and may tell about it.  He or she may also imitate writing. 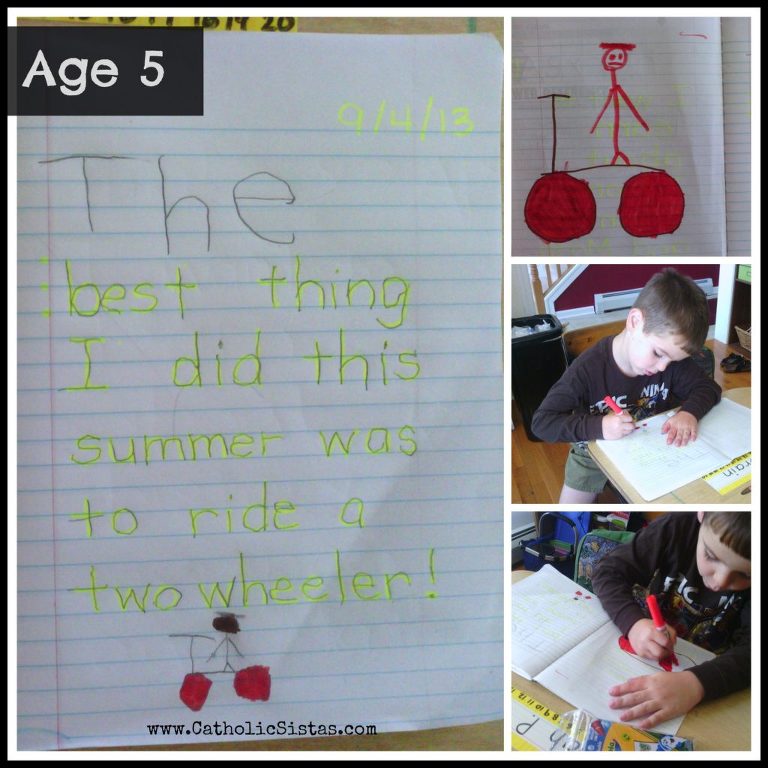 At this stage, the child’s pictures and writing becomes more defined. Here the child dictated what his favorite activity this summer was. I wrote the words for him and he traced them and drew a picture that perfectly matched the words.

Children name and write recognizable letters, although letters are frequently reversed. (Keep an eye on this as sometimes this is a sign of other issues.)  They write their names or the names of other family members, and other words that have personal meaning. These writers show an awareness that letters match sounds. Your child may now be printing his or her own name or an occasional known word and may be writing strings of letter like forms or a series of random letters.  Sometimes he or she may attempt to read the message back, but you probably can’t read it.  Although some children are able to recognize some basic sight words.

What to Teach: Demonstrate letter formation to avoid self-created and inefficient methods such as writing from bottom to top. Grouping letters that share common strokes will help develop correct motor patterns for writing letters. Prevent bad habits by continuing to encourage a good writing grip. 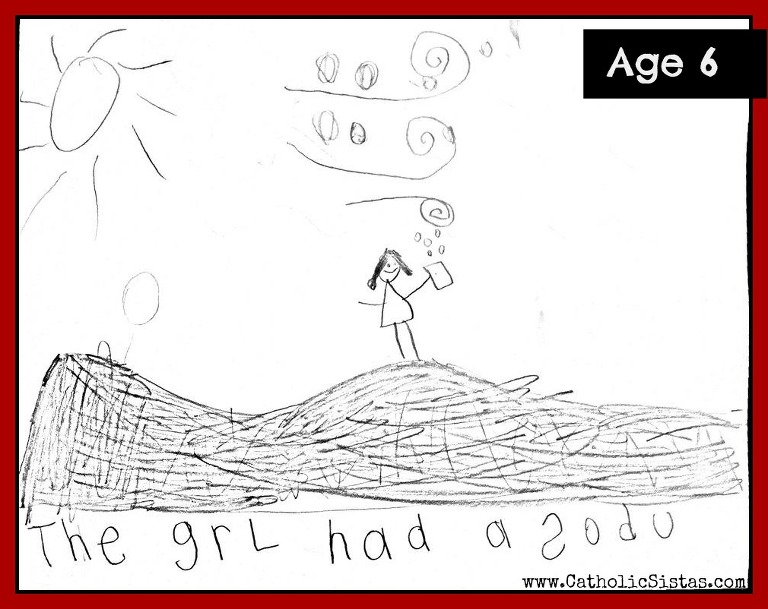 Here the child begins to draw very detailed pictures and backgrounds begin to appear. Then the child also begins to use invented spelling of words, also known as phonetic spelling. But you can see how writing is starting to develop very well. Here the child’s sentence says, “The girl had a soda.”

Using invented spelling, children group letters to write many words. Mature writing grip has developed. Children write letters, including lowercase letters, more smoothly and automatically. Dominant writing hand and use of
helper hand are well-developed. At this level, your child begins to use some letters to match sounds, often using one beginning letter to write a word.  He or she usually writes from left to right but may reverse some letters.  Now your child writes most words using beginning and ending consonant sounds and spells some frequently used words correctly.  He or she may begin to add vowel sounds, but they are often not the correct ones.  At this level, your child may begin to leave spaces between words.  It’s getting easier to read your child’s writing.

What to Teach: Assess that children have internalized correct, efficient motor pattern to write each letter. Monitor writing grip. Writing practice should be multi-sensory and include materials such as play dough,
Touch and Trace Letter Cards.  Allow for many opportunities for writing and encourage labeling of pictures drawn. 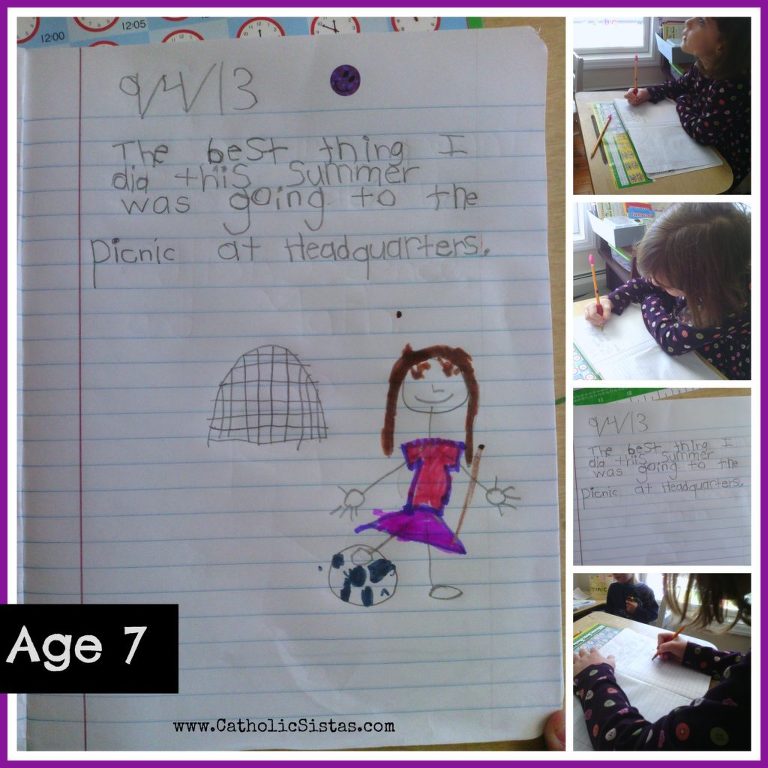 At this stage, writing is much easier for the child. She can copy from the board and turn a question into a statement/answer. The picture is much more detailed and probably matched the actual color and look of what she wore that day. 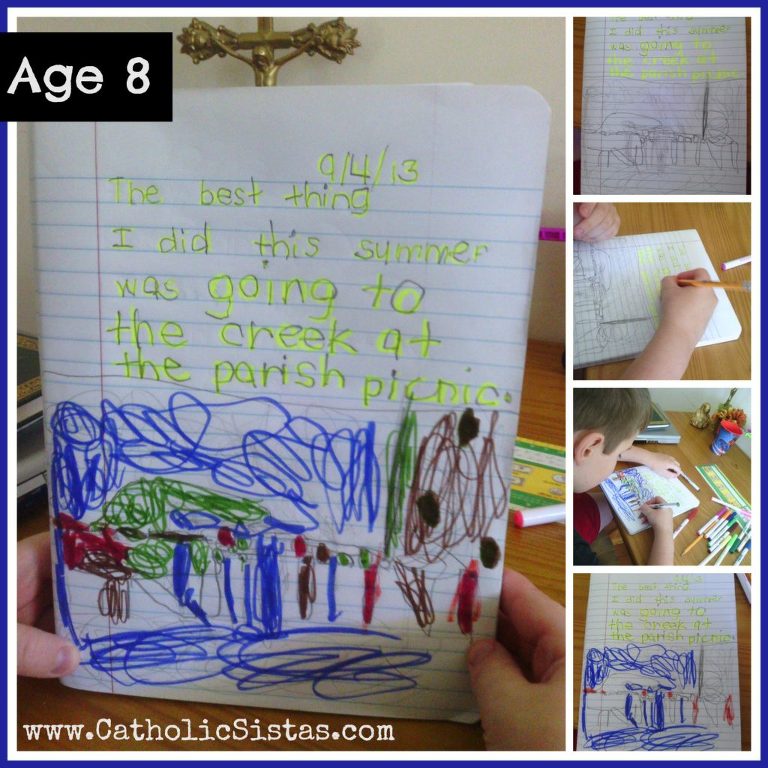 This stage is similar to the child at age 7. This child has an easy time with drawing but putting words and letters down are harder for him. To support his learning, and because he is older than his sister. He dictated the sentence and I wrote it in highlighter. He traced the words (which look more like his handwriting than mine) and then draw a very elaborate picture.

So, what do you do to instill the love for writing in your {Catholic} Homeschool?  I would love to hear other ways or methods others use.  We can learn to much for one another.