Alright, let’s face it. Is this the time of year, just before Thanksgiving, when you start dreading the impending “Holiday (Don’t call it Christmas) Season?” You know, the season of nightly news stories about how schools won’t allow the display of Christian symbols, the already beginning onslaught of commercialism and advertising, the atheist sloganeering that degrades an event so sacred, and all the politically correct puffery about how to speak of the Holy Celebration of The Birthday – Christ’s Mass – without actually saying it. It’s almost intolerable and almost ruinous, like the odor of the hydro treated petroleum distillates of Goo Gone® invading a warm and apple-cinnamony glowing kitchen. Pew!

How to rise above it all? Well, there’s a unique, if not peculiar, saint who would probably react the way I’d like to react sometimes in the middle of holiday nonsense, St. Christina of Liége, also more appropriately named, St. Christina the Astonishing. I plan to ask her for intercession this season when I feel the need to escape worldly, shall we say, stinkiness. St. Christina the Astonishing was born in 1150 and left an orphan at the age of fifteen with two elder sisters. She astonished her community at a most unexpected time:

“When she was about twenty-two Christina had a seizure, was assumed to be dead, and in due course was carried in an open coffin to the church, where a Mass of requiem was begun. Suddenly, after the Agnus Dei, Christina sat up, soared to the beams of the roof, and there perched herself. Everyone fled from the church except her elder sister, who, though thoroughly frightened, gave a good example of recollection to the others by stopping till the end of Mass. The priest then made Christina come down (it was said that she had taken refuge up there because she could not bear the smell of sinful human bodies). She averred that she had actually been dead; that she had gone down to Hell and there recognized many friends, and to Purgatory, where she had seen more friends, and then to Heaven.” [Butler’s Lives of the Saints]

That’s right, she levitated – at her funeral. She did some more astonishing things afterwards too – fleeing into remote places, climbing trees and perching on tiny branches, scaling towers and rocks, and crawling into ovens. All to do what? To escape from the smell of sin while she lived the rest of her life to suffer so that the friends she saw in Purgatory would be released.

There are many accounts of saints levitating, flying off the ground in deep meditations of ecstasy because they were so close to God spiritually: St. Teresa of Avila, St. Gemma Galgani, St. Gerard Majella, St. Ignatius Loyola, St. John Bosco, St. John Joseph of the Cross, St. Peter Claver, and St. Thomas Aquinas, to name several. Some think of it as the body moving physically closer to Heaven because the soul is already so in communion with God’s will.  Some physicists have suggested that levitation is the result of the mind tapping into the quantum vacuums zero point energy, whatever that is exactly. Whatever it is, it happens and it has been well-documented in the lives of the saints. I’m only trying to be a saint so I don’t actually expect to fly up to the rafters if I go to the mall and see some tasteless advertisements, but I definitely will smile at the astonishing idea.

I’ve already told my husband that if he sees me standing by the kitchen window wistfully staring at the tops of the bare trees in the backyard, or if he finds me sticking my head in the oven and lingering there just a little too long like I might try to crawl into it, or even if I stand up from the table and run out into the snow-plowed street with my fists clenched and head thrown back staring up to Heaven, it’s only because I’m trying to be saintly and am escaping something unpleasant, the smell of sin. And I’ll be taking a little time to offer up a prayer for the virtues of determination, graciousness and temperance because I know we live in an imperfect pilgrim world on a journey and I have faith and hope that God is drawing us all toward Him in the end. And I’ll be asking dear Christina the Astonishing to pray for my loved ones in Purgatory.

There is much more to her story. Please refer to the essay, “Christina’s Life,” by the artist, Cynthia Large, to read more about St. Christina of Liége and to visit the gallery of Cynthia’s other beautiful works, or to purchase prints of them. 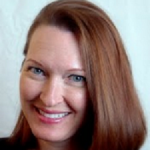 **Stacy Trasancos, Ph.D. is a joyful convert and former chemist turned homemaker raising seven children with her husband in Massachusetts. She is also a distance learning student at Holy Apostles College and Seminary and Chief Editor at VirtuousPla.net. She writes about all that she is learning at her blog Accepting Abundance.**