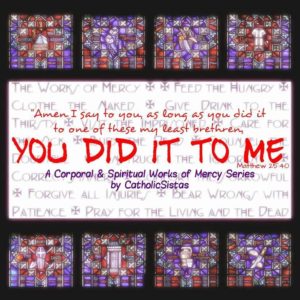 Judge not, that you be not judged. Matthew 7:1

I think pretty much everyone has heard some reference to this scripture, or at least the sentiment of not being “judgmental” of others. Tolerance and avoidance of being judgmental seem to be almost a religion in and of themselves these days. But what about this verse:

My brethren, if any one among you wanders from the truth and some one brings him back, let him know that whoever brings back a sinner from the error of his way will save his soul from death and will cover a multitude of sins. James 5:19-20

Take heed to yourselves; if your brother sins, rebuke him, and if he repents, forgive him; Luke 17:3

Ummmmmm, wait a second! I thought we weren’t supposed to judge each other!! And apparently it’s a “Spiritual act of Mercy” to tell someone they’re wrong?!?! While I could definitely get on board with the idea of telling people they’re wrong, don’t these verses contradict each other?? How can both ideas – “judge not” and “rebuke those who sin” – be correct?? 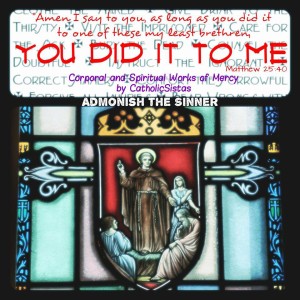 Though it may not seem like it at first glance, they are actually on the same page. And yes, they’re both right. Let’s look at a “real-life-ish”, if not exactly realistic, example: Imagine you are driving on a one-way road, and see someone going the wrong way. Do you say to yourself that maybe that’s the “right way for them” and that you don’t want to be judgemental about their choices by saying they’re going the wrong way?? Or do you get their attention and let them know they’re going the wrong way?? You know there is danger in going the wrong way on the road; people could get hurt or even killed. So even if it’s a honk and a quick gesture, your actions are pretty clearly a merciful act, as you are acting to prevent the other driver from horrible consequences.

Okay, you say, I get how that shows the mercy side of it, but what about the “judge not” part??

Well, let’s look at what you’re doing in our example. Are you deciding that this driver is a total nincompoop who shouldn’t have a license to drive and should stick to walking and far away from public roads?? Well, maybe you are, but let’s say you took the other option and you have judged that this person’s actions (going the wrong way on a one-way road) are dangerous to them and others, without extending that judgment to their entire worth as a person and as a driver, and without neglecting your own faults (double-check that you’re going the right direction before honking that horn!). That is what we are called to do, to judge the actions of our brothers and sisters, while remembering that it is never our responsibility or right to judge their worth as a person or the direction their soul is headed after death. Only God can see our heart and properly judge our soul. So we, as imperfect humans, are told not to judge another’s soul but to stick to the things we can see and know: the outward signs, words, and actions of others, and to wisely warn those whose actions show they are headed the wrong direction. Not for the purpose of telling them how bad they are, but just as in the example above, to try to prevent their actions from causing pain and hurt.

Now that all that confusion is cleared up, we come to the hard part, how do we go about telling someone they’re “driving the wrong way” in their sins??

I’m a total pro at this. I build a relationship with the person, then gently broach the subject at a relaxed moment and calmly discuss it with no hesitation, in straightforward and loving terms, and my “admonishment” is always received with appreciation and the realization that I am right.

Oh wait, that’s just how it goes in my head.

In real life, the few times I’ve gathered the nerve to approach such a conversation, I tend to say “um” more than actual words, and twist myself in knots trying not to offend the person, so much so that oftentimes the point is lost. And when the point is understood, frequently the person still takes offense and either respond defensively about their actions or lashes out and attacks me for presuming to tell them they’re wrong. In real life, I’m a rank amateur when it comes to “admonishing the sinner”. So why should you listen to me?? Well, honestly, you shouldn’t. In fact, I’d love to hear your thoughts on how to do it!! Truly, don’t listen to me, but do listen to St. Paul:

Brethren, if a man is overtaken in any trespass, you who are spiritual should restore him in a spirit of gentleness. Look to yourself, lest you too be tempted. Galatians 6:1

Or perhaps even more directly from the source, these lines from Jesus:

Do not judge by appearances, but judge with right judgment. John 7:24

What I take from these and other references to fraternal correction is that a few items are most important: gentleness/love, not being a hypocrite, and “judging rightly”. Being gentle and loving is easy to understand – being considerate of the needs and feelings of the person you’re talking to, while at the same time knowing that admonishing sinful behavior, in a way the recipient can truly hear and respond well to the admonishment, is truly an act of love. As for being a hypocrite, that means we don’t rail against sins we aren’t even tempted towards while ignoring our own temptations and failings. It means we acknowledge our own sinfulness before approaching our brother or sister about theirs. Finally, “judging rightly”. While we obviously can’t look into our friends’ or families’ heart to see the full truth of the matter, we can look with as much wisdom as we can at the information we do have (that we know to be true!) and make our judgment only from that, not our assumptions about what is happening.

Oh, and from my own experience, the most important key to the success of the whole thing is prayer and reliance on the Holy Spirit to guide you!

Won’t you join me in trying to lovingly warn those that we see are headed the wrong direction?? I promise I will try to practice this skill outside of my rosy mental image of myself!! What response have you received when you’ve reproved those you love who have sinned??