What is it about an elderly man ascending to the Chair of Peter that causes me, an old Baptist girl, to swoon?  I swell with pride, my throat tightens, tears pour like rain and I am struck dumb with incredulity at this timeless spectacle.  What the heck has happened to me? 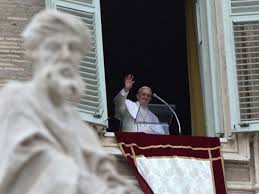 Before I converted, I’m not sure I was aware of the pope.  Surely I studied about a pope or two in world history, but I have no memory of them.  Of Catholics in general I was fairly ignorant, trusting to common misconceptions to form my opinions.  My grandfather subscribed to the “whore of Babylon” theory, but I mostly stuck with silly quips about Catholics avoiding birth control in order to increase their numbers, and going to confession so they could have a clear conscience about partying it up.  I was a deep thinker, see?

So when I met my husband and he wanted me to convert to Catholicism, I resisted.  After all, I knew the Bible. I knew what it took to be saved.  I felt no need for a change.  My husband, cradle Catholic that he was, didn’t know a thing about what he believed or why—only that I must become Catholic like him.  No other option was discussed.  I resented this, especially coming from the person who had seemingly absorbed nothing of his own faith beyond “this is the One True Church”.

I went through RCIA.  After several months of insipid reading and “feel-good” discussion, I was unmoved.  I had found no particularly convincing arguments for difficult Catholic doctrines, and a whole lot of well-intentioned but misguided spiritual mish-mash.  I declined to be confirmed.

Over the next year I prayed about this situation.  My husband, disappointed at my lack of conversion, regularly asked if I had now decided to become Catholic, and if not now, then when, and if not, then why?  (This is the same husband who proudly insists that he never pressured me to join the Church.)

During this time, we moved to a new town and at the invitation of a friend, I began going to adult formation classes in our new parish.  The man who taught these classes was a fantastic teacher who could rival any Baptist pastor for Bible-beating and fervent preaching—things I had missed while attending Catholic services.  I often went head-to-head with him over doctrinal points, but he always had answers that made a lot of sense.  In retrospect, I realize that I was doing little more than parroting the tired old arguments against Catholic teaching that have been around forever.  I’m sure he had heard it all before, but he answered me with patience and kindness and above all, he never compromised the truth.

One day I met with him in his office.  I don’t remember why.  I think I had a couple of small children along; why would I have brought children if I intended to have a serious theological discussion?  At any rate, we ended up talking about authority—the kind of authority the Church has, guided by the Holy Father and the Magisterium.  I have no idea what he said, though I believe he quoted some scripture along with it.  All I know is that suddenly, I was overcome.  My face flushed red-hot.  I began to cry.  Whatever he said about authority, I knew, deep inside, that he was right.  And I was wrong.  All the arguments I’d had suddenly meant nothing.  It was a profoundly awkward moment for him and an awkwardly profound moment for me.

From that time, my view of authority changed.  As I learned more, I could not help but love and appreciate the tremendous wisdom of God’s design for the Church.  Rather than seeing the Church’s authority—and its chief authority figure—as restrictive or controlling, I felt an immense comfort.  I could snuggle under the wing of my Holy Mother Church and my Holy Father, the Pope, just as a helpless baby bird might do.  I didn’t have to figure everything out; they had done all that for me.

This is not to say that I abdicated my reason or gave up trying to understand things for myself.  I didn’t.  In fact, I insisted on understanding each teaching that I came across, wrestling and reading until I felt satisfied with the answer.  The last bastion of my heart was Mary.  Her, I could not comprehend.  Finally, after a drawn out and disappointing struggle, it occurred to me that the God had faithfully answered all my other questions through the historic teachings of the Church.  They’d been right on everything else; could I not accept this one last thing as a matter of trust?  I decided that I could.

When I look at our Protestant brethren, I see many things that we would do well to emulate.  And yet I pity them, not only because they lack the fullness of truth, but because they are in many ways like what the United States might be without a President.  They lack the single, unifying, infallible guide that we have in the Holy Father, who, together with the Magisterium, gives us sure guidance in every difficulty. I am overcome with wonder at the wisdom which has steered our Church through everything from ancient heresies to modern reproductive technology.  Like any good Mother and Father, they set limits on us for our own good.  Sometimes, like children, we don’t understand.  But when we know our parents love us, we learn to trust that they always want what is best for us; they want to keep us from harm and see us safely to Heaven.

I’m no papal scholar.  Other than Humanae Vitae, I probably haven’t read a single encyclical in full.  Studying papal writings takes brain power that I have difficulty summoning on a good day, much less when surrounded by the energy-sucking mutants I call children.  And yet I look at each of the popes of my lifetime with complete devotion and awe.  The first time I read a critical comment about Blessed John Paul II, I was shocked.  Could there be a Catholic on the planet that did not adore this man?  [Please do not answer; I know now that there are many.]  Maybe I’m naïve, or too unquestioning and sheep-like, but these popes—Blessed John Paul II, Pope Emeritus Benedict, and now Pope Francis (yes, even Pope Paul IV, though he was before my time)—have my heart on a string.

I don’t idolize them.  I don’t divinize them.  But I love them with an inexplicable, total, and all-encompassing love.  Maybe I love what they represent: the visible head of Christ’s Church on Earth.  But I think it’s more than that.  I love their fantastic intellectual gifts.  I love their penetrating insights.  And, ultimately, I love their love.  They radiate, each in his unique way, the unmistakable, fruitful, all-consuming love which distinguishes the Holy Spirit indwelling.  They love us in word, and in deed.  They love us with firmness and gentleness.  They love us truly.  And I love them.  Other people can call them popes; as for me, I’m blessed to call each of them, affectionately, my Holy Father. 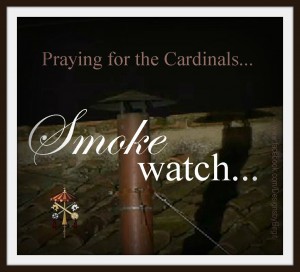 No’pe = a contraction indicating that there is no pope. This type of humorous comment (thanks, Stacy T) – in addition to serious conversations about the conclave – has been the fare of the day in the world of electronic media. As we all wait in eager anticipation, we find ourselves a part of the Papa-ratzi or papal information seekers. In this electronic age of ours, we don’t have to go far to feed our frenzy for knowledge. And what a historic time it is, when we witness the election of a new pope during the lifetime of a pope who has stepped down. This brief post then, seeks to help you to stay abreast of the papal news as it happens.

EWTN will be broadcasting live conclave updates on their television station as well as on their website.

If you still have a bit of catching up to do – as far as exactly how a conclave works – this quick YouTube video will help.

Vatican Insider also has a really nice interactive site that gives much useful information about all things about the conclave.

Are you a fan of the Swiss Guard? Well, look no further than their Facebook page where you will find “news coverage, videos, and photos highlighting our Guards in the Vatican”. 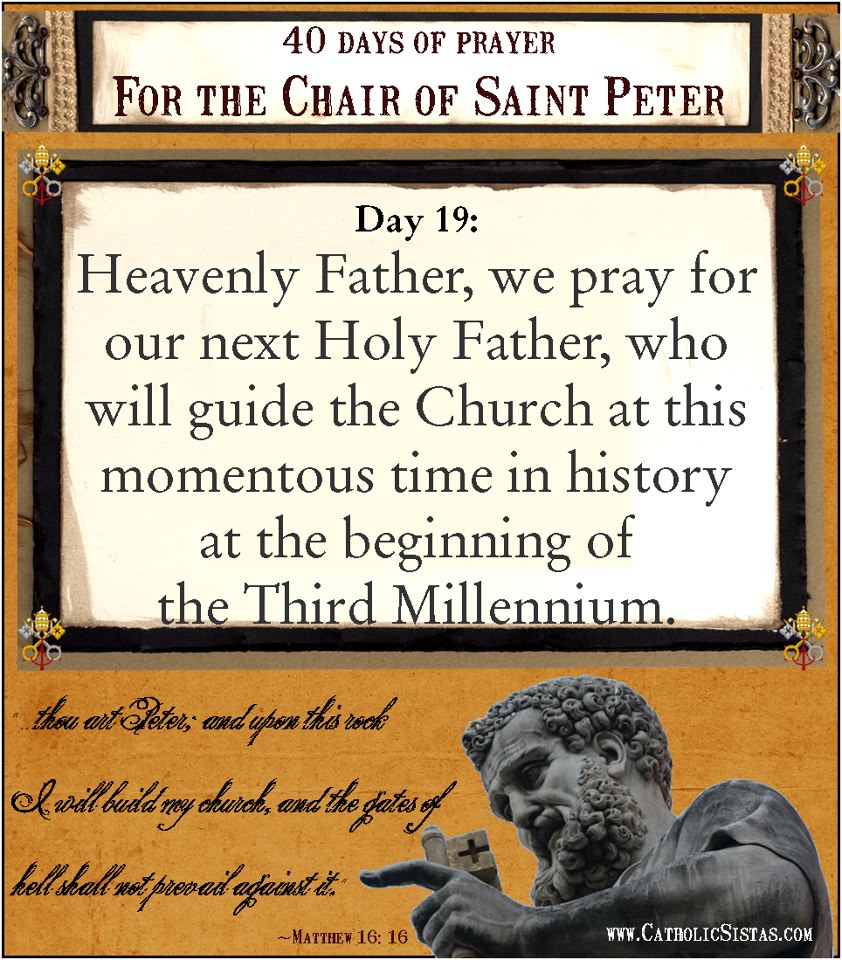 Of course keeping an eye on the Catholic Sistas fan page will bring you news you can use as well as charts and information to round out your knowledge of conclave happenings.

To participate in prayerful reflection on the election process and those involved you can join Catholic Sistas in our 40 Days of Prayer for the Chair of Saint Peter.

If you would like to personalize your prayers you can adopt your own Cardinal over on the Adopt a Cardinal website. I was given Cardinal Angelo Bagnasco and created a meme for him over on my Designs by Birgit page. So far there are 4,000 people praying for each of the 115 Cardinal Electors participating in the conclave. 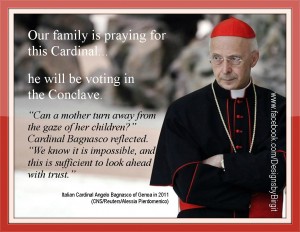 Even the secular press has some helpful information, such as this graphic from the Wall Street Journal.

Of course you are also bound to enjoy Facebook, Twitter (@Catholic_Sistas), and chatting with IRL (in real life) friends about this great time in the life of the Church. Please feel free to ask questions or post helpful sites and information in the combox. We will be praying together as we await the election of a new Vicar of Christ!

Check below for updates and additions… 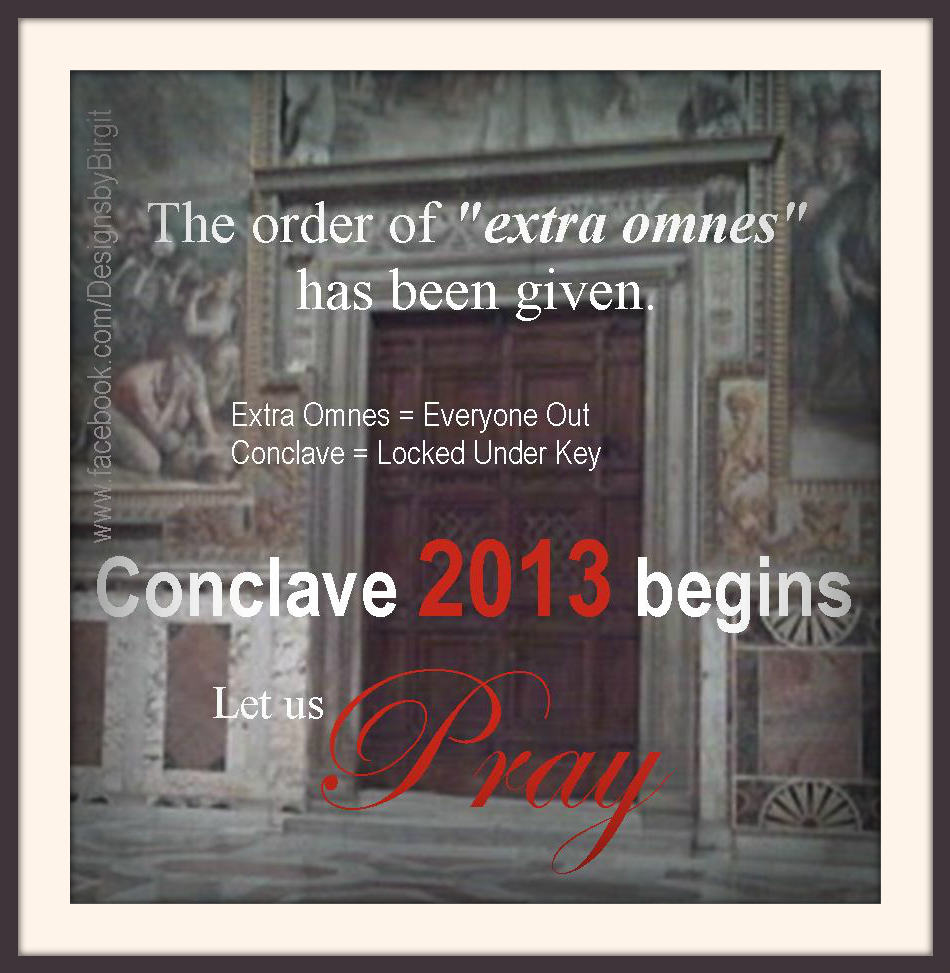 Here’s an interesting change for the new papacy -the newly elected pope will go to Adoration before the announcement of his name!

Do you have an iPhone or iPad? If so, check out Conclave, an app designed to provide plenty of information at your fingertips – no matter where you might be. Whether you are looking for news and information about the election of the next pope or want to watch for the white smoke rising from the Sistine Chapel in the Vatican – this is the app for you.

Did you know that there are actually two stoves involved in the smoke we see? One for the ballots and the other for the sole purpose of signalling whether or not there has been a successful conclave. Catholic News Agency has the scoop and a video in this fascinating article.

For an interesting array of informational snippets, read 20 Fun Facts about Papal Elections in Church History over at Canterbury Tales.

I, myself, have been confused about how many times to expect smoke and how many votes there will be in any given day. Having heard what seemed like contractory reports from usually dependable sources, I wasn’t sure if it was 2 or 4 per day. This graphic finally explains it – the answer is 4 votes but smoke only twice. Confused? Check out the explanation below. 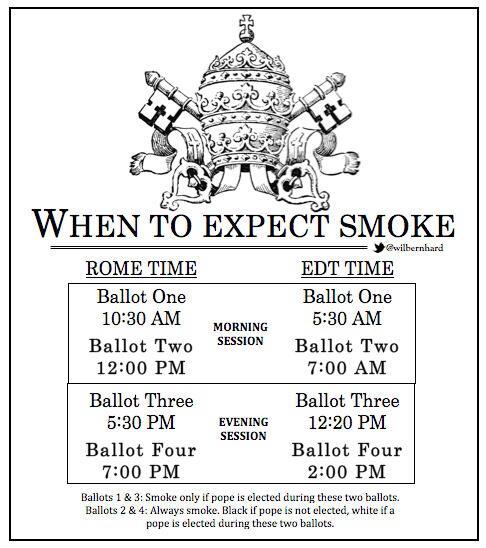 Do You Have Questions or Suggestions?

Don’t forget to suggest more sources or share links with us. We’ll add them to this post. Stay tuned for more…