Growing up, I thought my family’s pro-life activist lifestyle was normal. Only as an adult did I realize how abnormal it truly was, and how thankful I am for being raised in such an environment.

My parents were active in the pro-life movement from its infancy. Nellie Grey, the founder of the March for Life, had told my parents of her plans to hold the very first March for Life while having dinner at my parents’ home. We attended nearly every March for Life in Washington, DC, standing for life in the bitter cold, sometimes even snow. We prayed at the local abortion facility regularly. My mother was even present for this event with Martina’s mother-in-law.

My parents were very active in pro-life politics as well. I remember my entire family sitting around the family room, stuffing mailers for our pro-life state delegate in Virginia. He was a member of our parish and won re-election several times and I always remember my parents making a big deal about how important it was for us to work to elect a pro-life representative to fight for the unborn.

Besides public and political activism, my parents’ personal example was also profoundly pro-life. In addition to raising several of their own young children, my parents were also foster parents. They took in a young pregnant woman who had been in and out of jail, and continued to welcome her into our home after her daughter was born. Once the mother was committed to a psychiatric hospital, my parents attempted to adopt the toddler, who had grown up in our home and they had grown to love. Eventually, the toddler’s biological extended family stepped in and raised her, but this example stuck with me.

Upon graduating college, I worked in politics in Washington, D.C., where I met my husband. After getting married in 2007, I moved to Austin, TX. It was shortly thereafter that I started working as a public policy analyst for Texas Alliance for Life, where I have worked ever since. During that time, I have had a chance to be a part of some amazing pro-life work in Texas. 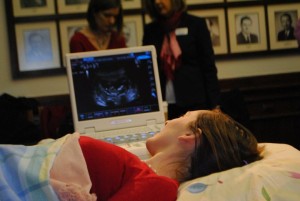 In 2009, I lobbied for the Choose Life license plate, defunding of Planned Parenthood, and the sonogram bill, all while pregnant with my first child. Unfortunately, all of those bills failed. But we were back the next session, Spring 2011, where the Texas Legislature passed the sonogram law, the Choose Life license plate, and partially defunded Planned Parenthood. I happened to be pregnant with my second child during this session, and when the pregnant woman who was supposed to have her sonogram done at our press conference promoting the sonogram bill did not show up, my boss volunteered me instead. That’s how I saw my unborn daughter for the first time – on a live sonogram inside the Texas Capitol. The video of her ultrasound became the image the media used whenever covering the sonogram bill that session. 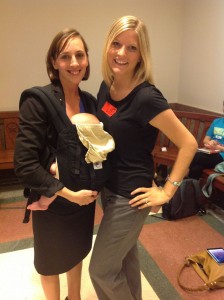 In 2013, I was again pregnant, but this time I was due in the middle of the legislative session. The timing actually turned out to be quite providential because by the time the special sessions dealing with SB 5 and then HB 2 came around in June and July, my baby was about 3 months old, the perfect age to come to the Capitol with me every day, snug in her Ergo carrier, while lobbying for the passage of HB 2. Despite the famous filibuster and chants of “Hail Satan”, HB 2 finally passed, putting into law common sense safety requirements for abortionists and abortion facilities. It was truly a remarkable experience, one I am so grateful to have been a part of, and glad I could bring my daughter along with me.

Through my pro-life work in Texas, I have also had the pleasure of getting to know and love former Planned Parenthood director Abby Johnson, and am honored to be a board member of her amazing ministry for former abortion facility workers- And Then There Were None. I’m grateful that the pro-life movement has come so far from the days of graphic images of aborted babies and sit-ins, to peaceful, loving approaches toward women, workers, and unborn children.

In the fall of 2014, we had to move out of Texas due to my husband’s job, and added our fourth child to our young family. Thankfully, I have been able to continue my work for Texas Alliance for Life while also home schooling my two oldest children.

Growing up, one of the songs we always used to sing at the abortion facility was Jesus loves the little children, all the children of the world. Red and yellow, black and white, they are precious in his sight. Jesus loves the little children of the world. Last fall, when I was praying at the abortion facility with my children, I again sang that song. After I had finished, my 4 year old daughter said “Mom, now we need to sing ‘Jesus Loves the Scared Mommies’ so they know not to be scared anymore.” So I substituted the words and we sang her version as well. My heart swelled, knowing I was passing on such a meaningful song that I so clearly remember singing with my mother at abortion facilities growing up, but also seeing my own daughter grasping the reality that we aren’t just there for the babies, we’re there for the mothers, and for the workers too. It was a glimpse of my life coming full circle – I am continuing the pro-life work my mother started decades ago, and although I pray abortion will be a distant memory by the time my children are adults, I hope they will continue to work to build a culture of life in whatever way God calls them to do so.

Looking back, it is evident how important parents’ pro-life witness is to their children for instilling a sense of justice and a passion for protecting the innocent. Parents have a special duty to do this in light of St. John Paul II’s call for Catholics to build a Culture of Life. I look forward to sharing my thoughts on how to build a Culture of Life with you here on the Catholic Sistas blog.