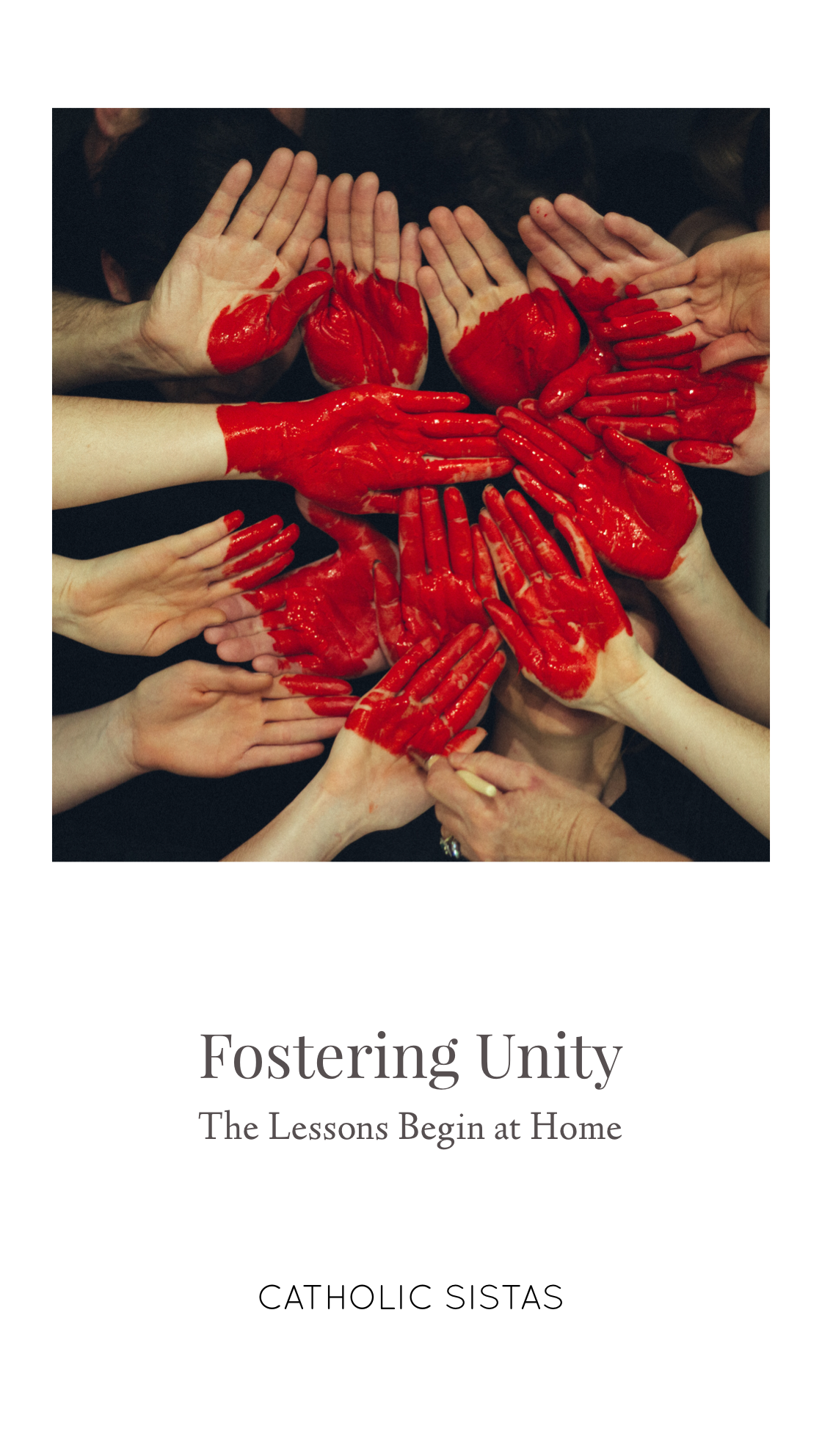 I was remiss in meeting my deadline for this month’s article, and chose a rare lazy Sunday afternoon to get caught up. While drafting an entirely different article, my phone began blowing up with the most recent division causing a stir among Catholics in the United States. I noticed every. single. Catholic. group I belong to on Facebook had individuals posting about the seventeen year old young men and the Native American drummer during a Friday in January.

The thoughts I had spent days drafting about community and the importance of relationships began to unravel, as I watched people begin to launch into political tirades, name calling, and derogatory attacks.

I’m not going to weigh in on this most recent controversy. But, as I drafted my article, trying to temper the anger and sadness welling within, the following message came to my head and heart.

Satan loves division. In fact, Satan thrives on division. As I’ve explained to my six year old before, Satan does a little happy dance any time we argue and fight with each other, and any time there are bad things occurring in the world. Satan would like nothing more than to have us throw our hands up in the air in exasperation with each other, sling mud and intolerance back and forth, and level our communities with hatred.

At the end of the day, family is the most basic formation of communities. Family is the initial community of which one is exposed. As 2224 of the Catechism of the Catholic Church (CCC) reminds readers, “The home is the natural environment for initiating a human being into solidarity and communal responsibilities. Parents should teach children to avoid the compromising and degrading influences which threaten human societies.” It is in the family environment that every small human begins to learn the construct of how to be within a larger community. Behavior that is accepted at home will presumably be allowed within the larger community. What is not allowed at home will presumably not be encouraged within the larger community, or society.

And yet, almost daily, there is a new headline breaking which reports on the negative behavior of individuals and negative interactions between groups of people. Scrolling through Facebook feeds, we see calls to action – not advocating compassion, respect, love, and unity; rather, calls to action involving name-calling, derogatory commentary by news reporters and observers alike, and vitriol aimed at making another person feel devalued for their contribution to the matter at hand.

Section 2227 of the CCC reads, “Children in turn contribute to the growth in holiness of their parents. Each and everyone should be generous and tireless in forgiving one another for offenses, quarrels, injustices, and neglect. Mutual affection suggests this. The charity of Christ demands it.”

The charity of Christ demands that, within families, “each and everyone should be generous and tireless in forgiving one another for offenses, quarrels, injustices, and neglect.” Within a family structure, we are to learn how to forgive. But, we also learn how to coexist. Every person in a family has their own unique personality and approach to situations, and within that family structure, we are supposed to be learning how to interact with others who may have differing views and opinions.

Yet, somehow, there has been a disconnect. If these lessons are truly being taught within the walls of our homes, then how are we not seeing the wider community positively influenced as an outcome of these lessons?

In his letter to the Galatians, St. Paul exhorts in Galatians 5:13-14, “For you were called to freedom, brothers and sisters; only do not use your freedom as an opportunity for self-indulgence, but through love become slaves to one another. For the whole law is summed up in a single commandment, ‘You shall love your neighbor as yourself.’”

Where there is the Holy Spirit, there is unity.

Where there is the Holy Spirit, we find love, joy, peace, patience, kindness, generosity, faithfulness, gentleness, and self-control.

If we want to see our society grow together, then we must look first at our own homes.

We must stamp out racism, anger, hatred, and ignorance beginning at home. We must not allow the adults within our walls to breed contempt, mistrust, or derision; and, we must not teach our children the error of those ways.

We must stand united in the goal of reaching the eternal salvation of not just our souls, but the souls of our children.

This unity begins at home, within the family. It extends out of the walls to the greater community and society at large.

Will you join me in playing your part? And, will you add the Prayer to St. Michael the Archangel to your prayers today?

Saint Michael the Archangel, defend us in battle.

Be our protection against the wickedness and snares of the devil.

May God rebuke him, we humbly pray.

And, do thou, o prince of the Heavenly Host, by the power of God,

Cast into Hell Satan and all the evil spirits, who prowl about the world, seeking the ruin of souls.

This is the last of a 12-part, once-a-month series on the Fruits of the Holy Spirit. This month’s fruit is Chastity. Be sure to see previous posts, beginning with Charity! 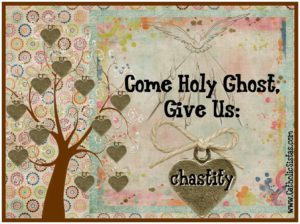 In our fallen world, no virtue is more detested than chastity. The secular world often praises the virtues of generosity, kindness, and patience – people who possess these virtues are “good people.” Chastity, however, is completely overlooked as a virtue, and is often simply mocked as something old-fashioned and fuddy-duddy during our “enlightened” age. The incredibly popular pastimes of pornography, contraception, premarital sex, crude TV shows – all of these are diametrically opposed to the virtue of chastity. These have led to greater evils in the world, such as abortion, human trafficking, and the AIDS epidemic. Our modern culture’s message of “Have fun and do what you want!” has had dire consequences. But in her wisdom, the Church continues to present to us the virtue of chastity: not as an outdated ideal, but as a loving, positive command to protect us from harm.

Chastity is the “virtue that moderates the desire for sexual pleasure according to the principles of faith and right reason.” Note that chastity is NOT synonymous with abstinence. Abstinence is refraining from partaking in sexual pleasure altogether; while it can be virtuous, depending on our state in life, it is not a virtue in itself. One who is practicing abstinence is not necessarily growing in chastity; chastity is purity in thought, word, and deed, and abstinence only concerns itself with the “deed” portion of that.

Our Lady of Fatima said that more souls go to hell for sins of the flesh (sins of impurity) than any other sins. Yet our culture is saturated in them! One cannot go to the mall without seeing a provocative poster, watch a football game that does not have a racy commercial, or listen to a radio program without crudity. The HHS mandate is purely an issue of whether or not Christian taxpayers should have to pay for the consequences of others’ unchaste behavior. Pornography revenues in the U.S. each year are more than the combined salaries of ALL professional football, soccer, and baseball players. The vice of impurity abounds, and so we should cultivate the virtue of chastity in our lives.

How can we grow in the virtue of chastity?

1. Prayer. We cannot resist temptation without God’s help. A popular devotion that has been promoted by numerous saints, including St. Anthony of Padua and St. Alphonsus, is the devotion of 3 Hail Marys for purity. The devotion is incredibly simple – pray 3 Hail Marys each morning and night, followed by “O my Mother, preserve me from mortal sin during this day/night.” In the words of St. Alphonsus, “A devout servant of Mary shall never perish.”

2. Avoid Occasions of Sin. If we frequently find ourselves falling after spending time with certain friends,watching certain movies, visiting certain websites, we have a moral duty to avoid them. When we pray the Act of Contrition, we firmly resolve to “avoid the near occasion of sin”, because willingly putting ourselves in a bad situation can be sinful in itself.

3. Observe the Principles of Chastity Based On Your State in Life. Chastity looks slightly different for singles, married, and religious.
If you are single and have a vocation to marriage, consider following principles of courtship. If a couple finds themselves being unchaste, they should discuss it honestly and set some specific ground rules. If you are called to marriage, you are called to help each other get to heaven, and the best time to start is before the marriage begins.

For married couples, the main focus of chastity is being open to life and not using each other purely for pleasure (no contraception or sterilization), as well as not seeking sexual pleasure outside the marriage act.

A comprehensive examination of conscience for chastity can be found here.

4. Persevere. If you find yourself falling frequently, do not get discouraged. Like any virtue, it takes time to build up our “spiritual muscles”. Beg Christ to heal you as he healed the woman caught in adultery and St. Mary Magdalene; go to confession, start again. No matter what your sins, you will receive forgiveness if you ask, and God will pour into you soul the grace to resist temptation.

“Flee from sexual immorality. Every other sin a person commits is outside the body, but the sexually immoral person sins against his own body. Or do you not know that your body is a temple of the Holy Spirit within you, whom you have from God? You are not your own, for you were bought with a price. So glorify God in your body.” – 1 Corinthians 6:18-20