Are you a hero mother? I bet you are.

This week we completed our ninth week of school.  A small victory for anyone who teaches, but especially us home educators who not only wear the hat of teacher to our children, but also that of home maker, chef, school psychologist, curriculum coordinator, school nurse, among many other tasks.  Let’s face it our job as home educators, is not an easy one.  Let’s be frank about this.  Something someone said in a homeschooling forum, struck a cord with me….she said, “I wish someone would have not just painted a pretty picture of homeschooling before we started, I wish someone would have been frank and told me just how HARD it would be!”  This is an honest comment, though I think that anyone who would sit and foresee what this journey would entail before beginning would possibly not realize how difficult it would be was also not being realistic.  Of course, all the beautiful blogs with perfect still pictures of children reading and painting, or playing an instrument do not help, BUT also, we cannot simple believe that that is how their home life is 100% of the time.  Why? Well because we are fallen humans and children are children.

I must confess, I feel like a failure to my children (MANY, MANY, MANY, did I say many, yet?) Many times!  I have even taken these failures to the Confessional many times.  The last two times, my spiritual director said two things that have stuck with me, although I did not realize it until yesterday when I wrote a help plea in a traditional mother’s group I belong to.  First, he said to me, “well that is why we call them children right?  Your job is to patiently (ahem!) guide them to do what is right, teach them what is wrong, and this may take many times, even fifty times if you must.”  Easier said than done right? But think about this, he is right even if the words are hard to to swallow.  The next month he asked me this, “since the last time you were here, how many times do you think you were impatient with your children, would 200 times be an exaggeration?”  Tearfully, I answered, “not an exaggeration at all, probably 100% accurate.” Then he said, “well for the 200 times you were impatient, would you say you were at least 400 times patient with them but they would not listen?” GAH! Yes!  So true….I had not even thought about this.  He then said, “God wants you to focus on the good you are doing for your children, the sacrifices you are making for being home with them and not be so hard on yourself, you failed, you found your faults, pick yourself back up and move on! Forgive yourself!”  WHOA!  Did it stab me in the heart? Of course.  Did it sink in?  For about three hours later.  What happened the next week (this week) is an example of what a bad job I am at forgiving myself.

Yesterday morning, I woke up and everything that could have gone wrong went wrong.  We had to get school done BEFORE the doctor’s appointment, which took six months wait to get, so I could not miss it or cancel it.  My children were exceptionally pushing all my buttons and I sat on the couch, with a white flag, grabbed my iPad and begged friends in a forum for advise.  I was typing and thinking to myself, “they are going to think I’m such a failure, I pride myself in being such a homeschooler extraordinaire, and cheerleading anyone into homeschooling, and living a good, holy Catholic life, but here I am begging for suggestions for my four out of five unruly children.” BUT guess what happened?  TOTALLY THE OPPOSITE!

I got responses like, “Oh honey I am so glad to read this, I’m not alone.” To, “Oh this too shall pass when my children were smaller I thought it was the end of the world and now they are such great adults!” To, “Story of my life!”  From women I too thought had the perfect home life with still pictures of beautiful children sitting around the kitchen table, cooperating and smiling as they complete their math problems.  BUT, they were there telling me that was just a “Facebook Lie” and that they too struggle.  WHAT?  Then this happened, I came across a meme that had been floating around, I had read and thought, “wow, what love this mother had for her child!” Never associating that mother to myself.  Her child, as an adult, called his mother, “his hero who believed in him.”  I am not even sure if this is true or not, I did not take the time to check Snopes or anything because it did not matter.  Why? I have met in the past eight years of home education, the most dedicated mothers, mothers with and without college degrees, mothers of special needs children, mothers of children whose school system failed them, mothers of children who were unruly, yet they stuck by their child until that child reached his or her best potential.  Who was this mother who was called a hero?  The mother of the genius, Thomas Alva Edison, here is the meme: 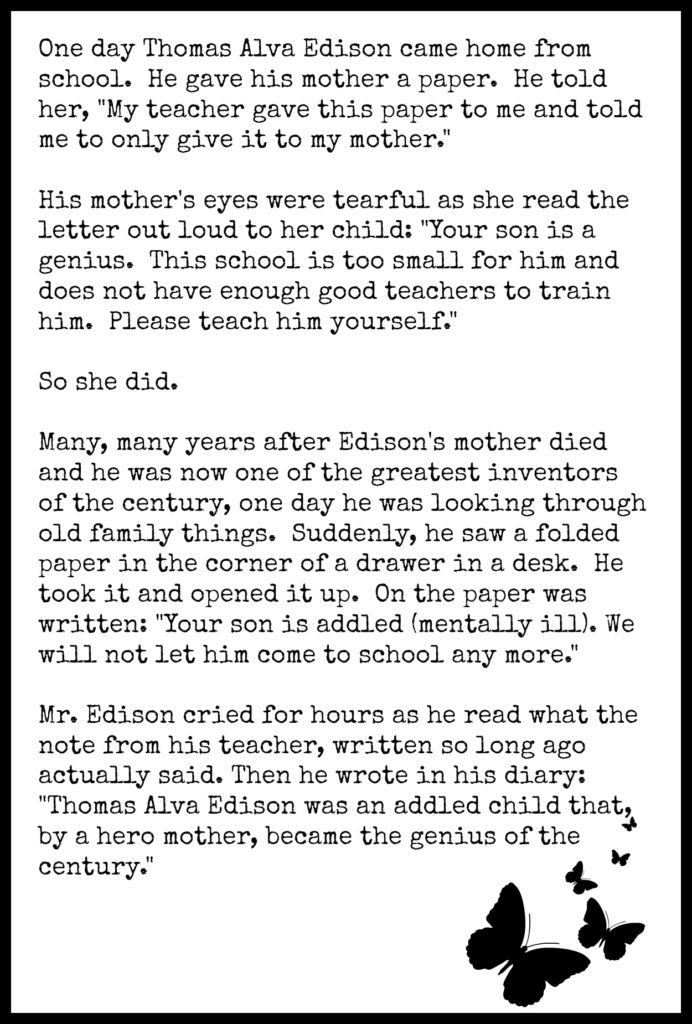 This was a mother that not only believed in her child but also in herself.  What do we see today?  We only know the story of her genius child, her story (true or not) has not been told.  Did she doubt herself capable to teaching her child?  Most probably. Was she worried of being a bad mother? Quite possibly. Did she give up?  No.

I write the following advice for myself, if it rings true to you, wonderful, if not, pass it along it might help another mother in need:

You are that hero mother.  You can do it!