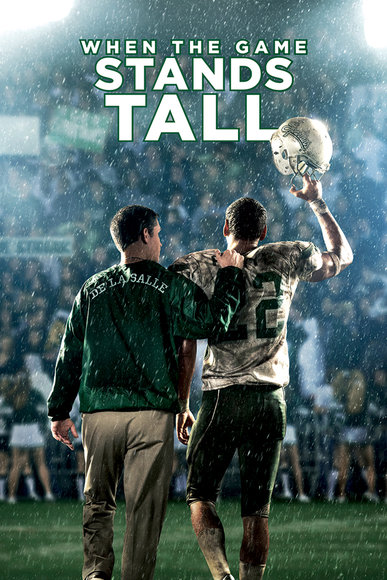 The Oklahoma Sooners set the standard for NCAA Division I football teams with 47 straight wins.

Then there’s the De La Salle Spartans and their incredible 151-game winning streak.

the thrill of victories and the consistency of championships.

In a world super-saturated and obsessed with winning, it’s no surprise that secular critics are eating this movie up in the review world. They want only bone-crushing football scenes and to write off the stories of the players as unimportant. Perhaps if they were looking for something a bit…deeper, a bit more introspective, their reviews would have been more “on target.”

I went to see this movie in June with my husband on the heels of the San Antonio Spurs winning against the Heat in the NBA Finals. Add to that, we live in Texas where football – especially high school football – reigns supreme. {As an aside, Friday Night Lights was filmed just down the literal road from where I live!}. I easily admit I am partial to high school football – my own high school team played against Phil Dawson in Texas Stadium my junior year of high school. I won’t mention whether his 50+ yard field goal won the game for his team. I just won’t.

When the Game Stands Tall opens nationwide August 22 and is based on a true story. The backdrop is set against high school De La Salle high school’s 10-year winning streak of 151 games that started back in the nineties {when this gal was still in high school}. While it is billed as a family movie, it easily falls into other categories, such as drama, faith-based, and sports. 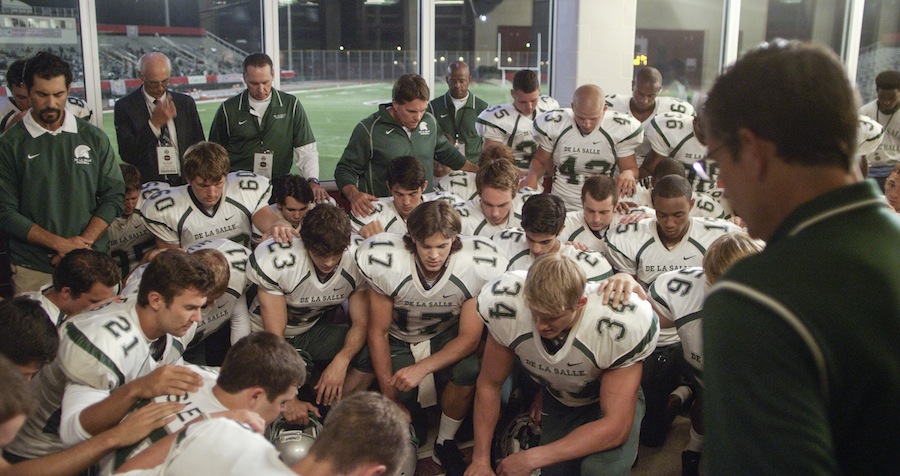 Caviezel, who plays Bob Ladouceur, De La Salle’s football coach, is at a crossroads of sorts with his team, with his life, with his career. When he arrived at De La Salle in 1979, the school had never had a winning season. Yes, his team is winning, but he never pushed for the wins. As the story unfolds, the flashbacks set the stage for the type of environment Coach Ladouceur always fostered among his players – one that would ultimately carry them past football. The lessons that prepare you for life but carry with it the elements that make for a cohesive team. We see the team come together to share their strengths and weaknesses, their accountability to themselves, their teammates, their coach, and to the game itself. When the team experiences a variety of tragedies, they find they are more in need than ever to return to the core values of the team – sacrifice, commitment, and teamwork. 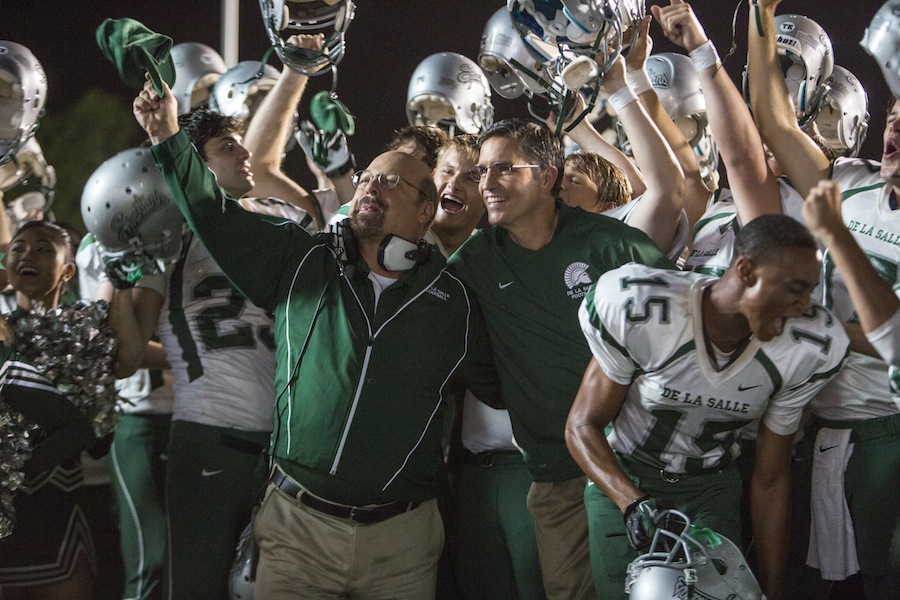 What I loved most about this movie was, even though yes it is about a football team and yes a great deal of the scenes have to do with football, is the message doesn’t revolve around football, but rather the core values that Ladouceur instilled in his players and in his coaching philosophy. Dare I say it, but there are many women {and maybe some men, too?} who don’t keep up with football and will still be able to enjoy and appreciate the movie. So, grab some of your favorite people and take them to see When the Game Stands Tall. It’s a movie that stands tall in many ways.

“It has been a long time since I have enjoyed a movie so much. WHEN THE GAME STANDS TALL has a message far deeper than winning and losing football games. This true story reveals what it really means to succeed beyond a win/loss record. As a mother of ten children who have all been involved in sports, I found this movie to be both gripping and uplifting.” Patti Maguire Armstrong, Catholic author

“This movie confirms why I wanted to be a football coach! The most compelling thing I got from WHEN THE GAME STANDS TALL was the lasting impact a coach can have with his players! Coach Ladouceur might be the perfect model for this goal! He always demanded commitment and integrity and then the wins will come. Not sure there is a better role model for young athletes or aspiring coaches than this man! Absolutely awesome story! This is what our country and young people need as examples!”
Scott Linehan, Passing Game Coordinator, Dallas Cowboys

“I would recommend the movie WHEN THE GAME STANDS TALL to anyone, whether they follow sports or not. Good character is in short supply these days, and this film shows a compelling picture of what attractive character looks like when the pressure is on.”Mark Householder, President, Athletes in Action

“WHEN THE GAME STANDS TALL is an inspiring movie with the ironic message that the most important lesson to be learned from 151 straight victories is that there is so much more than winning at all costs! The marvelous story of Coach Bob Ladouceur and the De La Salle High School football team is a must-see for players and coaches of all sports.” Bishop Thomas John Paprocki, Diocese of Springfield, Illinois
Author of Holy Goals for Body and Soul: Eight Steps to Connect Sports with God and Faith; Chairman, Episcopal Advisory Board, Catholic Athletes for Christ

“Inspiring, moving and motivating! When the Game Stands Tall is a gut-check for the soul, forcing us to ask ourselves whether we are merely breathing or truly living. When the Game Stands Tall strikes a chord of the heart with a note that resounds and carries. Finally, a ‘sports’ film even my wife will love. I can’t wait to share this movie with my family—it’s a feel-good story for the ages, reminding us of all that is right in sports … and, more importantly, in the human spirit. ” Mark Hart, Executive Vice President, Life Teen International

“WHEN THE GAME STANDS TALL offers something for everyone. Like Hoosiers and Remember The Titans, this is a great sports movie and much more. In life’s great moments, and even in the midst of some of its most challenging, we see how a group of committed people, with a great goal, can work together to become more than they could have ever dreamed. This is true in sports and it is true in life. Go see this film, and bring your friends and your family.” Curtis Martin, CEO & Founder of FOCUS (Fellowship of Catholic University Students)

“This movie has the most realistic in-game football scenes yet, and the adaptation sticks to the real-life script. It’s an authentic look at sports’ most impressive streak. It’s also the perfect way to start football season.” Bill Bender, Sporting News college football writer

“WHEN THE GAME STANDS TALL is far more than a football movie—it’s a playbook for life. Inspirational, gripping and vastly entertaining, this film will leave you motivated to give your best for all the right reasons. See it with your entire family and leave ready to make our world a better place.” Lisa Hendey, Founder of CatholicMom.com and author of The Grace of Yes

TONY DUNGEE’S THOUGHTS ON THE MOVIE