My parents were taking a trip out of town and needed someone to care for their animals for the 3 days they would be away. When my mom mentioned it, I volunteered eagerly – it would be silly for them to pay someone else to do it since we live so close. I should also preface this story with the fact that I am not really an animal person; we moved to the “farm” just before I entered college, and I didn’t grow up around them. So by volunteering, I was actually volunteering my dear husband – he would go out to the barn area and do the dirty work (feeding 2 jerseys cows, 2 calves, a smattering of chickens, 2 dogs, and a cat), and I would stay in the backyard and watch and wave at him and thumbs-up him while pushing our kids on the swings.

Then my husband found out that he was going to have to go into work early one of those days – before sunrise. With trepidation, I agreed to do the farm chores that morning, remembering that the last time I had helped, it ended poorly (a cow wandered into the backyard.) 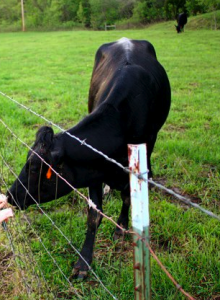 The day came, and I put on my rubber boots and headed out to the barn. We had been instructed to let the younger calf nurse on Rosie, one of the jerseys, to save us the trouble of milking. I let her into the milking stall and the calf trotted up and began to eat. Unfortunately, I forgot to heed my brother’s advice to pin the older already-weaned “toddler” calf in the other part of the barn so that he couldn’t get in the milking stall. He rounded the corner and pushed his way in. My efforts to stop him were in vain – he weighs over 600 pounds and well, I don’t. He gave me a smug look (maybe I imagined that part?) and began to nurse on the other side. Rosie was extremely upset and kicked him several times, but he persisted.

My brother had assured me that when the milking was done, Rosie would run right back through the gate to get to her side of the fence because “she knows where she belongs.” So once the calves finished and walked away, I opened the gate. She stared into my eyes (probably thinking “HOW could you have let him defile me like that?”). “Go ahead, Rosie!” I motioned to the gate. Instead of going straight through the gate, she took a hard right and walked into the forbidden area, smacking me with her tail as she walked by. Oh no. I kept trying to get in front of her, and she would stop and stare at me, and then push by me again. I tried speaking to her sweetly, pushing her in the direction of the gate, and did a fair amount of hollering, but she couldn’t have cared less. She knew I was irritated and SHE WAS ENJOYING IT. She continued to wander, occasionally stomping and snorting at me. The yelling did nothing to change her mind; I held no power over her.

As I wondered how long I should wait before calling my husband and begging him to come help me, a tip that a friend had shared with me suddenly popped into my head. Sweet feed! I ran to the food can and grabbed a scoop of it, shaking it in front of her face. When I had caught her attention, I tossed the food on the ground on the other side of the fence. She pranced through the gate, and I slammed it behind her with a sigh of relief. Easy as that. It took me quite a while longer to regain my composure and to shake off my extreme annoyance. 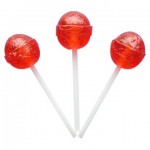 Later that day, I was dealing with normal toddler woes and thinking, “If I can’t even convince a 2-year-old to do what is right, HOW am I going to handle the temper tantrum of a strong-willed 16-year-old someday?” He was acting like that cow! Completely ignoring me and doing what he wanted to do. And how should I respond? I can raise my voice and strong-arm him into doing what I want, which may or may not work. I can bribe him with sweet feed (um, a lollipop) to get him to do what I want, but bribes only go so far, and dragging our children along on a string of bribes is a fantastic way to turn out spoiled children.

And then my mind wandered back to the cow. My brother is primarily the one who takes care of the animals, and the cows listen to him. He doesn’t have to scream at them or bribe them. He can snap his fingers and they go whichever direction he points. At most, it takes a little gentle coaxing to get them to obey. But how does he do it? What makes them listen to him and not to me?

The difference is: he has their hearts. The cows don’t really know me. But they trust him, and love him (in a bovine way). Their animal instincts tell them that he has their well-being in his best interest. It took many months of him caring for them to build this trust, and it took some external force and some rewards along the way. But over time, they have come to realize that he is looking out for them, and they listen, without force and without bribes.

We can apply a similar principle to these rational creatures that are our children. In order to persuade them to choose the Good, we must first win over their hearts. Scripture tells us: “Train up a child in the way he should go, and when he is old, he will not depart from it.” (Proverbs 22:6) We should correct our children’s faults; both discipline and rewards have their place in instructing a child. But eventually, our children have to desire the Good for themselves. In addition to discipline (whether positive or punitive), we must try each day to truly reach their souls through our instruction. A time will come when they must make moral decisions on their own, and as parents we must do our best to inspire virtue in them so they will desire to follow those rules. At age 2, they do not understand the “why” of our rules; as we help them form their consciences, we seek to teach them the “why”, and to encourage them to follow our moral code and that of the Church. If we have won over their hearts, they will look to us for guidance and inspiration instead of ignoring our wisdom. And constant and unceasing prayer is the best way to ensure our children’s hearts are firmly entrenched in the desire to know, love, and serve God.

The cow:cowherder/child:parent analogy can be also extended to our personal relationship with God. Because of Original Sin, we are like the stubborn cow. Sometimes we simply put our fingers in our ears and ignore our conscience. Other times we seek God because of what He can give us. So many people return to church or begin praying because they feel as though they have hit rock bottom, and want God to do something for them. A return to God is never a bad thing, of course, but even if God’s immediate answer to our prayer is a “yes”, at some point we are going to get a “no”. A faith that is shallow and dependent on favors is like the house built on upon sand – it will falter in stormy times. We must strive to fully allow our hearts to be won over by God; then we will follow His commands, listen to His promptings in our soul, and truly love Him. That doesn’t mean we won’t ever stray or sin; no matter how many firm resolutions of amendment we make, we are still fallen creatures. But if we have given our hearts to God, we will be able to pick ourselves back up more easily, beg for forgiveness, and return to Him.