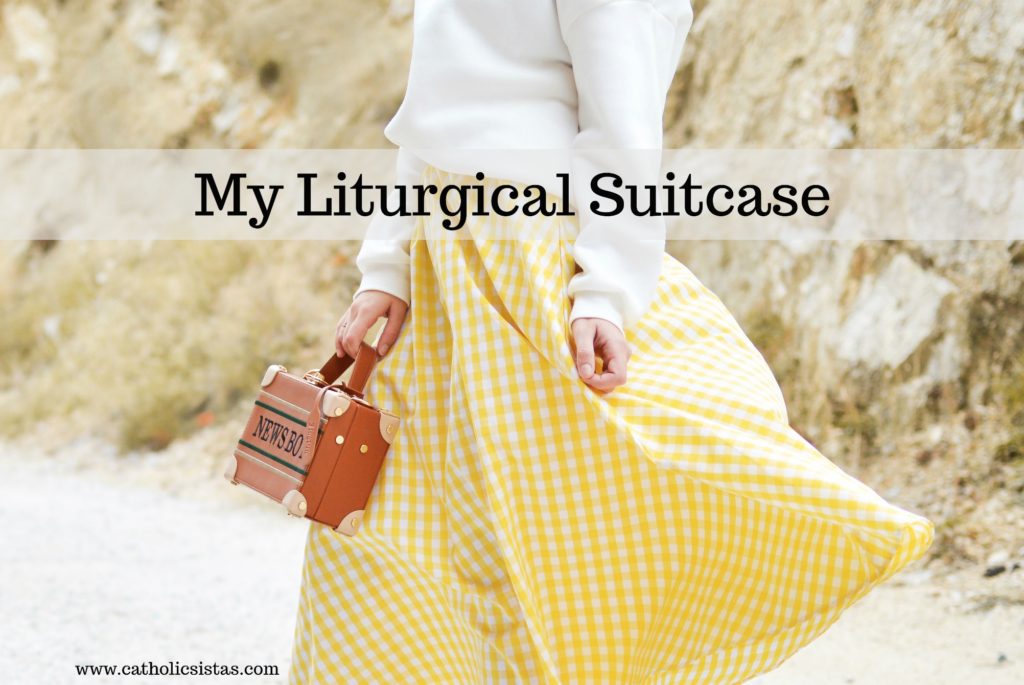 I never felt a weight associated with the liturgical seasons until I had children.

From the moment I held my eldest son, I knew I had the grave responsibility to raise him as a good Catholic in a world that, at times, can be a very hostile and cruel place.

I wanted the cookie baking, card making, St. Nicholas shoes filling, Easter basket earning memories of a home that was built on the shoulders of a Catholic tradition.

The issue was that I wanted traditions that I hadn’t been raised with myself and I was floundering in the Pinterest perfect social media posts of bloggers and friends who had already found their secret sauce.

I was also a hormonal new mom looking for purpose and I was drinking deep from a well of insecurity.

So naturally, I tried everything.

I handpainted Jesse Tree ornaments.
I baked traditional Easter cookies that my baby couldn’t even eat yet.
I spent hours looking for an Advent wreath that would fit on our tiny apartment table.
I agonized over the Masses I missed because of sleep deprivation and nursing troubles.

And ultimately, I felt like a failure. There wasn’t a way to do everything and be everything in the throes of early motherhood.

And then a streak of real life happened.

It started with a nasty bout of flu during the Triduum.

A pregnancy that made it difficult to enter our church because of the incense.

And recently, two Christmas seasons that were spent with very ill grandparents.

This past year, my sons and I flew across the country to be caregivers for my mother-in-law who had fallen ill during chemotherapy.

No tree.
No gifts from us.
And a church that felt foreign.

I cannot say this was ground zero. I will not lament over an important duty. It was the only right decision.

But it did break me.

It disconnected me from the constant stream of expectations I had built up for myself.

It gave me a suitcase with actual limits and asked: “What are you bringing with you?”

After essentials, there was room for three things: my Bible, my missal, and a cross to hang over the door.

As Christmas approached we were no longer hanging hand painted ornaments on a lighted tree branch. We weren’t singing Christmas carols or baking cookies. But we were returning to scripture every day. We were together and I could breathe into a season of hope in a time when I felt very alone.

For Lent, I have decided to simplify my season routine again and to focus on reading scripture with my children. My husband introduced me to the seven penitential psalms and I thought their history was worth sharing.

These particular psalms are grouped together not only because of their expressions of sorrow for sin but also because of their association with the seven deadly sins. They have often been interpreted as a type of spiritual ladder in which the reader embraces a separate virtue as he or she reads each psalm. Cardinal Pierre d’Ailly assigned them as such:

Psalm 6: Fear of Punishment
Psalm 32: Sorrow for Sin and the Desire for Confession
Psalm 38: Hope of Grace
Psalm 51: A Love of Purity and Mercy
Psalm 102: A Longing for Heaven
Psalm 130: Confidence in Divine Mercy
Psalm 143: Joy

However, the grouping of these psalms extends much further back than Cardinal Pierre d’Ailly’s. St. Augustine of Hippo mentions them as early as the 5th century and is said to have had copies of them posted near his deathbed. Up until 1972, minor orders and those that received tonsure were assigned these psalms as part of a daily prayer practice.

Personally, I am planning to focus on one each Sunday of Lent, with hopes that I will reflect and re-read them during the weeks leading up to Easter. We are also holding on to our family fasting traditions, but I will be taking this time to reassess my general approach to liturgical living and to define the limits of my proverbial “suitcase.”

What am I bringing with me?

With Lent here, I have given myself more permission to look up from my daily “to-do” list. It’s been a hidden gift. I have had time to truly reflect on the talents of my friends.

Each of the Catholic ladies in my life has a beautiful and unique suitcase of their own- different shapes, depths, colors, and filled with different essentials. I have crafty friends that build Lenten roads that span the entirety of their house, friends that dig into their prayer life with saintly devotion, friends that attend morning Mass every week, friends that bake traditional breads, and friends that host every single person that is without a home regardless of their budget or chair count.

Truly, I am blessed with their example.

Whatever you fill your suitcase with, I am honored to be traveling with you towards the same horizon. May you have a blessed and fruitful Lent.