What a powerful month this is! We are raising our voices louder than ever so we’ll be heard! Respect for LIFE, from conception until natural death! This includes the smallest of souls newly conceived, the disabled, the elderly, and the criminals on death row. The story I want to share this month is simple but powerful! It shows respect for life no matter the circumstances…..

I immediately knew what I was called to write about this month as we focus on respect for life. My Mother told me Stephen’s story when I was still very young, but it has continued to move me to tears each time I hear it. Stephen’s story has been kept in the family for the most part since it happened 15 years ago. His story needs to finally be shared and heard. It is my great honor to write this for him. 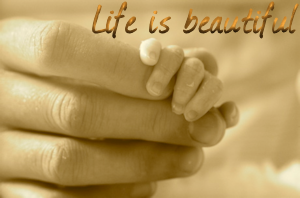 Stephen’s life was short, but his story speaks volumes. Life and love is sacred ALWAYS.  God is the only one who can give life, and should be the only one to take it away. Maybe the reason God gave Stephen his terminal condition was so his story could save other unborn babies from the horror of abortion. If even one baby is saved by his story, his death was not in vain. If even one soul is moved to fight this battle, his life was not in vain. He never had the chance to speak himself but his story will speak for him instead.

I was six years old when my family moved up to Princeton Idaho. The land we moved to might have been considered ‘forsaken’ with very few homesteaders willing to brave the harsh reality of the area.  My parents had purchased a 78 acre piece of property with no house, no running water and no electricity. We hauled two very small trailers onto the land to live in.  We dug a privy, a cistern, a septic hole, and a well ourselves. I remember being snowed in so badly during the winter that my Dad would tie us kids up to sleds in order to haul groceries back and forth.  We would often wake in the mornings to find snow in our beds and our toes blue with cold. The summers were horribly hot and uncomfortable with no air conditioning or way to cool down. We were lucky if we got one bath a week and the water was always shared until it was so dirty it was like mud.  My Father worked for a company an hour away and worked long and hard hours. That left my Mother alone in such living conditions with seven children to raise herself. She bravely and humbly accepted the harsh life that was dealt to her. She went on to home school all of us and teach us our faith, not only through lessons but more importantly through example. In this regard, I learned to accept what you are given with love and make the best of it!

The only time our family got out was once a week for mass, which was an hour drive there and back. We had few friends, and remained very reclusive for the most part. Our life in Princeton is another story in itself, and I will not go into further detail.

During our three year stay in Princeton is when Stephen’s story takes place.

My Mother was lying in bed one night when she says she felt an overwhelming presence all around her. “It was like being in another world outside of myself; in another dimension,” she said. She immediately and fearfully knew God was near and speaking to her. He asked her something no parent ever wants God to ask them. “Can I have one of your children?” She was stunned and frightened by this request. There is no greater sacrifice God can ask from a parent than to take a child. My Mother was humbled and saddened, but said yes to Him. Her only requirement was that she was guaranteed this child would go directly to heaven. Still stunned by the request, she struggled with what God meant. Was he going to take one of her children she had already birthed and was raising? Did he have plans to take a child not yet born? She didn’t know at the time. She said that God’s presence left immediately following his request and her answer.

When later asked about why she said yes to such a perturbing request, her answer simply was “If it’s God asking, how can you say no?”

Shortly after this encounter my Mother found out she was expecting her 8th child. Her pregnancy progressed very normally and there was no reason for alarm. Life went on normally and she didn’t tell anyone what had occurred. She was still unsure what God planned to do. My father was completely unaware of the request my Mother had from God until after the shocking doctor’s visit and ultrasound later in the pregnancy.

Further on her pregnancy she had a dream, in which she saw the unborn child in her womb. Her unborn son was magnificent! He had all ten toes and fingers and a beautiful little body and face. It was revealed through this dream that my little brother had a terminal deformity; he was anencephalic and was missing the top part of his head, skull and higher brain. God had given him the gift of life, an eternal soul and warmth and love in his Mother’s womb.

My Mother woke up the next morning finally knowing God’s plan for her and her child. No longer did she have to wake up daily wondering when God would come to take the child he requested.

Routine ultrasounds were not done during my Mother’s child bearing years; however, towards the end of her pregnancy the doctor requested an ultrasound as her measurements were slightly off. Growth seemed to have slowed, and the doctor wanted to be sure all was ok.

My parents went in for the ultrasound and waited as the ultrasound tech began the scan. The ultrasound screen was turned away from my parents and they couldn’t see what was going on. Several silent moments passed before the ultrasound tech suddenly stopped short and became very distraught. He said that he was seeing something he needed the doctor to look at and then he turned to leave the room. My Mom stopped him saying “I already know what is wrong with my baby.” He stopped and asked her to repeat herself. She calmly told him “my unborn child doesn’t have an upper skull and is without a brain. He only has a brain stem.” The ultrasound tech was shocked and speechless at the words my Mom had just spoken. Stuttering and still in shock he asked “How did you know that?”

“God showed me.” She replied. At that moment she had a lot of explaining to do as my Father sat beside her thunderstruck and just as speechless as the tech.

The tech then quickly left the room, frightened and dumbfounded at what had just happened. After the diagnosis was confirmed by the very astounded doctor, he carefully recommended that she terminate the pregnancy. There was a chance that her baby would not survive birth let alone live any length of time. She had extended family encouraging her to abort as well. Her answer was always the same “Why would I destroy the life inside me? The only thing my child will ever know on this earth is the love and warmth of his mother’s womb. Why put him through terrible pain, when I can give him that warmth and love?” 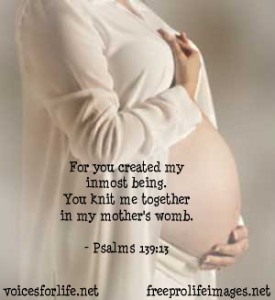 My Mother bravely continued the pregnancy and let that little life inside her feel that warmth and love so many other babies are torn from because of abortion. My baby brother continued to live and grow inside my Mother’s womb. He made it to full term despite the doubts of so many and made his appearance into the world on May 2’nd 1996. He came into this world alive against all odds and lived in my parents arms for 13 minutes and was baptized before passing away to join his heavenly Father. He was named Stephen after the first martyr of the Church. We decided we wanted to bury him on our property and I vividly remember digging his grave ourselves. We began digging before his birth. It was one of the most difficult things our family ever had to accomplish. My Father made Stephen’s coffin himself and my Grandpa engraved his head stone. All of our hearts ached so badly preparing for his burial. Each one of us children were asked to make or give him something to place beside him in his coffin. I remember my sister and I hand sewing small animals to give him out of silk and ribbon.

Mother carefully wrapped his small body in a soft blanket and placed the gifts we had made around him.

Stephen was buried shortly after birth and his entire family was there to lower him into the rich earth. We had our wonderful parish priest out to pray over him. It was a chilly and overcast day and I remember the silence and tears as we said our farewells to him.

Stephen was our little miracle here on earth and is now our saint in heaven. It is a great comfort knowing we already have one sibling living in glory. He was greatly loved during his short life in and outside the womb. God made sure our little angel met his parents face to face and was baptized before he passed away, which is exactly what my Mother had asked for. Stephen is proof that life is sacred from conception until natural death no matter the circumstances. God had known and loved him before my parents even knew he existed. God had BIG plans for his small life from the beginning of time. Every child God creates is destined for great things if only the parents allow that child to live his or her life according to God’s plan. My baby brother was the most vulnerable of all people and our society daily tells woman to end the life of unborn babies like him with disabilities, or simply because they are an inconvenience.

Please God, let our society see the evil of abortion; the murder of millions of innocents before they have a chance to live their lives. Let their silent cries finally be heard. RESPECT LIFE, FOR ALL!