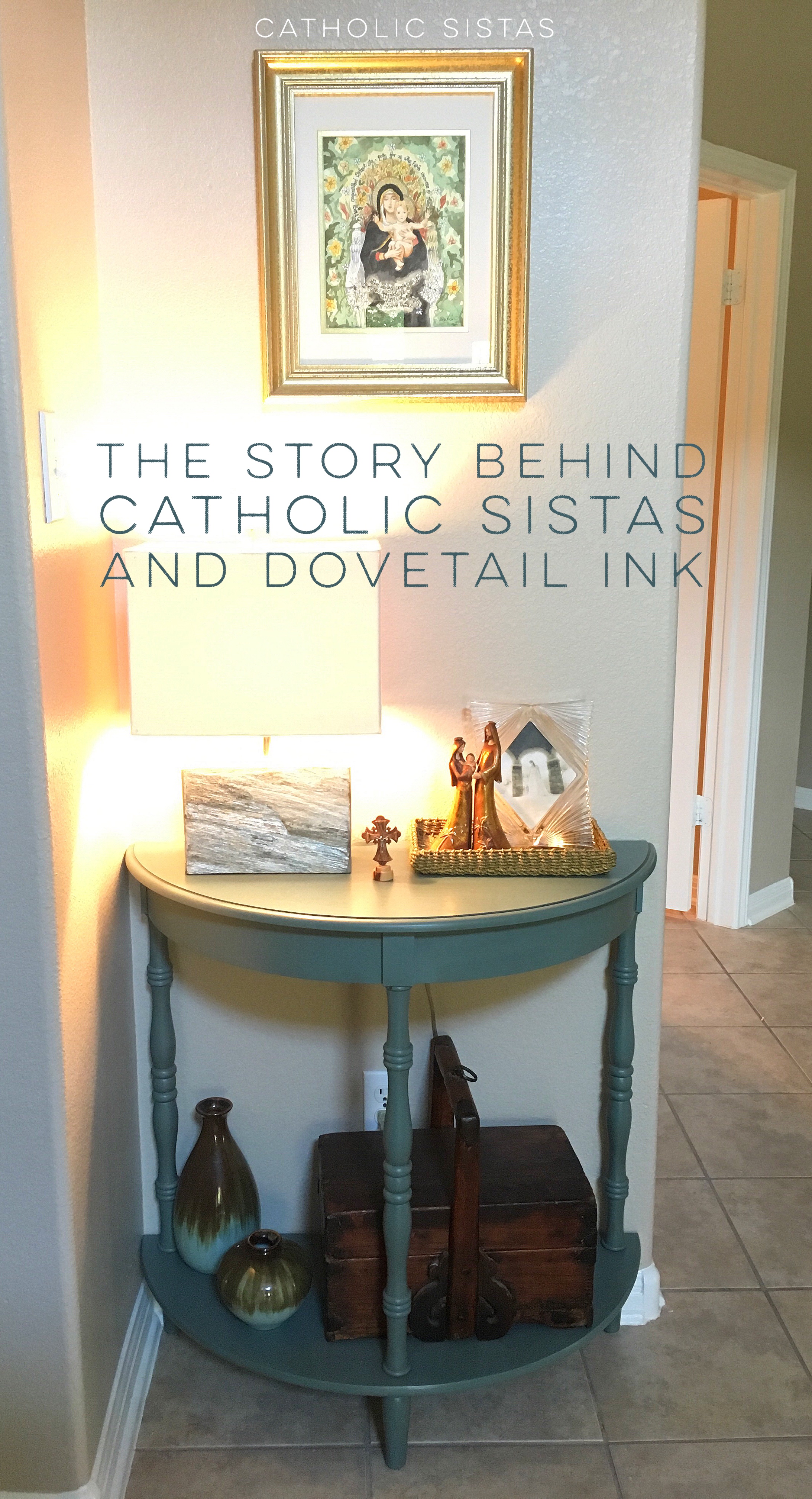 By now, you’ve probably noticed that Madonna of the Lilies has been an inspirational part of Catholic Sistas from day one. You may also have noticed a rendition of that William-Adolphe Bouguereau print that I commissioned Monica Welch of Dovetail Ink to do a couple of years ago, which goes by the name of Our Lady of the Lilies.

But what you may not know is the story of how our interests merged and turned into some of the most stunning artwork any Catholic planner could have.

Monica and I met at our parish MOMs group, which formed in the spring of 2010. Mutual friend Roxanne had begun her endeavor to bring mommas together to pray, support, and become lifelines for each other through this new ministry. Though I don’t recall the exact “Hi, my name is Martina – nice to meet you, Monica” – I do know that her story was one that was incredibly intriguing. I remember her bringing in some artwork she had created to one of the MOMs meeting and sharing her story that she didn’t even know she could draw until very recently. Crazy huh? I mean, her stuff is some of the most stunning work I’ve seen. What drew me to it was it had this contemporary feel to it at a time when unique Catholic artwork was truly difficult to find.

The years would roll by, Catholic Sistas would be born, and in 2014 I would create the first edition of the Catholic Through The Year planner. It wouldn’t be until work started on the 2016-2017 planner that I asked her to prayerfully consider creating artwork specifically for the covers of the CTTY planners.

At the time, adult coloring pages were all the rage in the secular world, but there were virtually no Catholic coloring pages to speak of – what a fun idea, I thought, and what a great way to get Dovetail Ink in front of more Catholics.

To say I’m a fan of Monica would be an understatement. Almost every room in my house has some artwork of hers, including several originals {we just moved, so it’s going up in new rooms!} and I love the time we use to prayerfully collaborate on each cover for the DAYBOOK – liturgical covers will have Universal Church themes and academic covers will have scholarly or intellectual elements having to do with the Catholic Church.

Each cover theme is thought of at least six or more months in advance – and, if you think about that for a moment, yes I already have next summer’s academic {2018-2019} as well as next year’s {2018} liturgical cover themes in mind, already prayerfully considered and waiting for their time slot to go over details.

Our system is simple and predictable.

So, this newest theme is garnering new attention because even it is a departure from the usual cover art that has a blank spot behind the logo. This time, during the creation process, Monica sent me multiple pictures of sketched out pencil art and as it unfolded I messaged her, hoping I hadn’t messed up the timing.

I immediately had this sense that this cover art needed to be sold like all her other art pieces. And she agreed. So, between gas shortages {after Hurricane Harvey – we live five minutes from each other} and general everyday mom stuff like cleaning carpets and picking kids up from school, the art was finalized into yet another stunning piece.

One lucky winner will win a free liturgical DAYBOOK as well as a print of that same cover that Monica painted. Though the giveaway is not hosted here this time, it will be hosted on our Facebook fan page and our Instagram account. And guess what? If you don’t win, you can still purchase the DAYBOOK for a price that rivals all other Catholic calendar planners. And Monica’s artwork will be available in her store for purchase, too. 50% of proceeds from the art will go to help victims of Hurricane Harvey.

And stay tuned, friends. More about Monica and her art apostolate Dovetail Ink and the story behind the rendition of Our Lady of the Lilies is in the cue to be shared with you very soon. Head on over to Instagram and Facebook to enter! 🙂 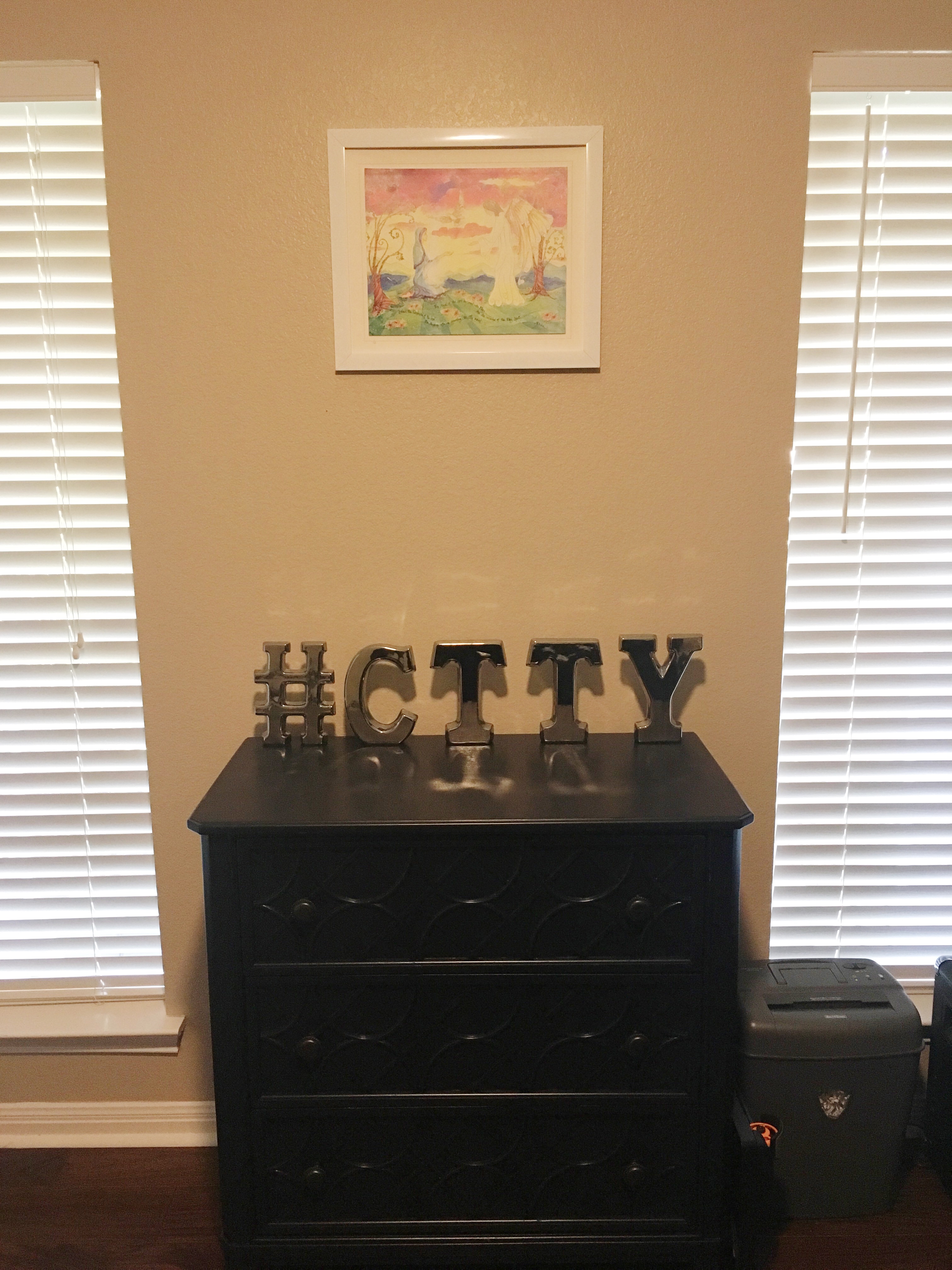 The Annunciation, a piece given to me by a dear friend, has always held a special place in my work space. Here, in our new home, it finds its way on our walls. 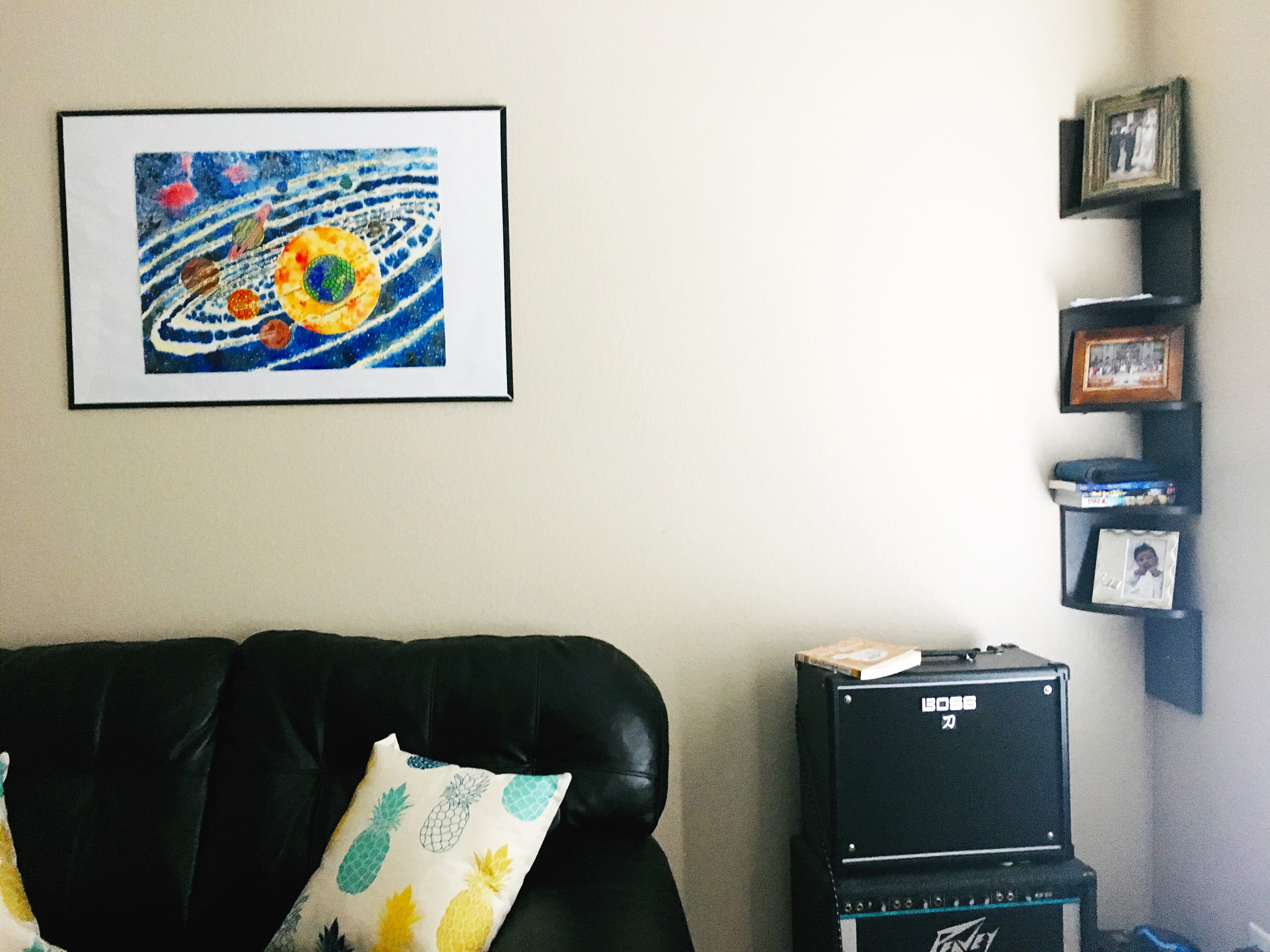 For our son’s Confirmation, we bought another original of Monica’s for his room. The Magnificat and the solar system come together in this beautiful piece.