Today’s Mass Readings, with a reflection below.  Scripture added in brackets denotes it was not included for today’s selections, but I have referenced it in my reflection.

A great King am I, says the LORD of hosts,
and my name will be feared among the nations.
And now, O priests, this commandment is for you:
If you do not listen,
if you do not lay it to heart,
to give glory to my name, says the LORD of hosts,
I will send a curse upon you
and of your blessing I will make a curse.
[For a priest’s lips preserve knowledge,
and instruction is to be sought from his mouth,
because he is the messenger of the LORD of hosts.]
You have turned aside from the way,
and have caused many to falter by your instruction;
you have made void the covenant of Levi,
says the LORD of hosts.
I, therefore, have made you contemptible
and base before all the people,
since you do not keep my ways,
but show partiality in your decisions.
Have we not all the one father?
Has not the one God created us?
Why then do we break faith with one another,
violating the covenant of our fathers?

Brothers and sisters:
We were gentle among you, as a nursing mother cares for her children.
With such affection for you, we were determined to share with you
not only the gospel of God, but our very selves as well,
so dearly beloved had you become to us.
You recall, brothers and sisters, our toil and drudgery.
Working night and day in order not to burden any of you,
we proclaimed to you the gospel of God.

[As you know, we treated each one of you as a father treats his children,
exhorting and encouraging you and insisting that you conduct yourselves
as worthy of the God who calls you into his kingdom and glory.]
And for this reason we too give thanks to God unceasingly,
that, in receiving the word of God from hearing us,
you received not a human word but, as it truly is, the word of God,
which is now at work in you who believe.

Jesus spoke to the crowds and to his disciples, saying,
“The scribes and the Pharisees
have taken their seat on the chair of Moses.
Therefore, do and observe all things whatsoever they tell you,
but do not follow their example.
For they preach but they do not practice.
They tie up heavy burdens hard to carry
and lay them on people’s shoulders,
but they will not lift a finger to move them.
All their works are performed to be seen.
They widen their phylacteries and lengthen their tassels.
They love places of honor at banquets, seats of honor in synagogues,
greetings in marketplaces, and the salutation ‘Rabbi.’
As for you, do not be called ‘Rabbi.’
You have but one teacher, and you are all brothers.
Call no one on earth your father;
you have but one Father in heaven.
Do not be called ‘Master’;
you have but one master, the Christ.
The greatest among you must be your servant.
Whoever exalts himself will be humbled;
but whoever humbles himself will be exalted.”

In these passages I naturally couldn’t help but ponder on the scandals that have rocked our Catholic Church over Her 2000 years of history.  We are a Church of sinners from top to bottom, left to right, and this includes every single one of our clergy.  Jesus knew this, and yet He still entrusted His followers to sinners.

It’s funny how even in Scripture, history repeats itself.  Four hundred years before Jesus spoke these words recorded in the Gospel of Matthew, our Lord God was reprimanding priests for the same faults Jesus was reprimanding the scribes and Pharisees.  In Malachi, God reminds the priests that they are to be His messengers, that their lips are to preserve His Truths.  Similarly, Jesus reminds the crowds that the preaching of Pharisees is still to be honored, despite their poor example.

Non Catholics wonder how it is that anyone can be a Catholic, “Clearly the teachings of the Church must be rubbish if priests can be child molesters!  And heck, just look to the corrupt popes, especially at the time of the Reformation!” one might think.  Even 2011 has been a hard year on us in the fallen clergy front.  Yet, despite all of this corruption, the deposit of Faith as handed down from the Apostles has remained in tact for all of God’s faithful to hear today.  Jesus, in His infinite wisdom, knew He must remind His faithful to be obedient to His teachings despite the sins of those entrusted with the Truth.  It is only by an act of God that the Catholic Church has not wavered on Her teachings on the Trinty, Salvation, the Real Presence, the Inerrancy of Scripture, the Dignity of all Human Life, Contraception or even Women’s Ordination.  The Church’s teachings are unpopular in the world, yet unwavering because they are protected by the Holy Spirit, even among the sinfulness of the vessels, the clergy. 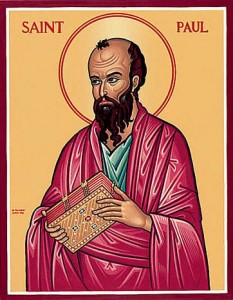 Thank God, quite literally, that “bad” clergy is only common in the media and that good and holy clergy are exceedingly the norm in the real world. Scripture preserves one such example of holy clergy in St. Paul.  He is no one’s master, he is not a substitute for the Real Father, and he perfectly humbles himself, as we read in his first letter to the Thessalonians.  St. Paul often speaks of the unique juxtaposition of his office as priest in his letters. He clearly has no issue with his role as a spiritual father (1 Cor 4:15 “I became your father in Christ Jesus through the gospel.”) as it is necessary to have that Authority in order to be able to instruct the faithful in living lives aimed at the glory of God.  Yet St. Paul also humbles himself in every chance he can get as we see him often use the greeting in his letters “Brothers and Sisters”.  You can tell that St. Paul keeps Psalm 131 close at heart, as he does not take any credit for the good work done through his ministry as a priest. He immediately gives thanks only to God, and confesses that the words he speaks to the Thessalonians are not of his own, they are not man-made, but they are indeed directly the words of God.  Just as the Holy Spirit ensured the inerrancy of this letter that St. Paul penned to the Thessalonians, the Holy Spirit also ensured that St. Paul was able to verbally teach the Word of God perfectly.  This ability was not of Paul’s self, it’s not that he was just that good, it was not because of the degree of his holiness, it was only by the will of God through his office as priest and apostle.

Let us remember to pray for our priests.  They have promised God to instruct the faithful in His Word, and this is a vow that is very displeasing to the Evil One.  The vocation of the priesthood does not come with protection from sin, both God and Satan know this.

A Prayer for Priests
by John Cardinal O’Connor 1995

Lord Jesus, we your people pray to You for our priests. You have given them to us for OUR needs. We pray for them in THEIR needs.  We know that You have made them priests in the likeness of your own priesthood. You have consecrated them, set them aside, annointed them, filled them with the Holy Spirit, appointed them to teach, to preach, to minister, to console, to forgive, and to feed us with Your Body and Blood.

Yet we know, too, that they are one with us and share our human weaknesses. We know too that they are tempted to sin and discouragement as are we, needing to be ministered to, as do we, to be consoled and forgiven, as do we. Indeed, we thank You for choosing them from among us, so that they understand us as we understand them, suffer with us and rejoice with us, worry with us and trust with us, share our beings, our lives, our faith.

We ask that You give them this day the gift You gave Your chosen ones on the way to Emmaus: Your presence in their hearts, Your holiness in their souls, Your joy in their spirits. And let them see You face to face in the breaking of the Eucharistic bread.

We pray to You, O Lord, through Mary the mother of all priests, for Your priests and for ours. Amen.

Disclaimer: This post was finished early and scheduled to automatically post on Sunday.  The third commandment was not broken in the creation of this edition of Splendid Sundays =D.