This past week our Right to Life group held a candlelight memorial service in remembrance of all the babies and mothers lost to abortion.  It was such a moving experience.  When I was putting together all that we were going to do I tried my hardest to determine what kinds of things were “too much” to introduce and what kinds of statistics and/or pictures would make the greatest impact.  It was a hard task to do.  I knew that besides those who would come from the parish we also would have the entire middle and high school youth groups there as well as representatives from our local pregnancy resource center, the West Georgia Right to Life representative and someone from the paper.  It was a daunting task.  How do you bring such a sensitive, yet important, topic to those who may not have any knowledge about abortion? 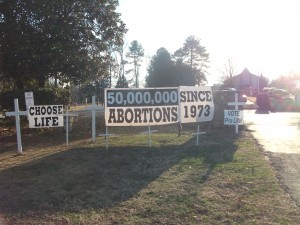 The first thing we decided to do was to tell people how many babies have died since the legalization of abortion.  We put up a sign at the front entrance of the church parking lot that said, “50,000,000 abortions since 1973”.  The actual number now is about 52,000,000 (we borrowed this sign from the West Georgia Right to Life group).  We also included crosses as well as “choose life” signs and “vote pro-life”.  After putting up the signs right before the Saturday Mass the first car into the parking lot rolled down his window and asked me if the number was right.  Could there possibly be that many babies aborted since abortion became legal.  I assured him it was.  He shook his head in disbelief and said he just had no idea.  He knew abortion took lives but that many?  He just couldn’t wrap his mind around that number.  I realized right then that we had already touch a life.  Hopefully we made a difference for him.  I think we did.  Most importantly we educated him and hopefully he’ll go out and educate others as well.

We left the signs up all weekend for the Masses.  I had several people tell me thank you for taking on the task of getting the word out how prevalent abortion is in our society.  I hoped and prayed that our memorial service would be a success later in the week.  If I had a hunger before to open eyes, now it was insatiable!

I decided that the best way to go with the prayer service would be to first introduce what the Bible says about the child growing in the womb.   I read the following passages:

In Jeremiah 1:4-5 we hear the words, “The word of the Lord came to me saying, “Before I formed you in the womb, I knew you; before you were born I set you apart; I appointed you as the prophet to the nations.”

In Psalm 139:13-16 we read the words, “For you created my inmost being; you knit me together in my mother’s womb.  I praise you because I am fearfully and wonderfully made; your works are wonderful, I know that full well.  My frame was not hidden from you when I was made in the secret place.  I was woven together in the depths of the earth; your eyes saw my unformed body.  All the days ordained for me were written in your book before one of them came to be.”

Of course there are other passages that pertain to life but these are the ones that spoke to me.  I then asked the people present to think about those passages as I described life in the womb, month by month.  As we talked about each month we lit candles in front of a picture of the child in the womb at that stage.

Month 5:  The baby is very active now and can be felt by his mother.  She may be able to hear now.  Fingerprints and footprints are complete.  She can suck her thumb.  She is approximately 8-12 inches long.  At this stage in pregnancy it is still legal to take her life through abortion.
At Month 9 Baby has very specific active and sleep periods.  She is preparing for birth by putting on weight and settling head down.  She is practicing her breathing.  Her weight and height vary greatly now during this last month.  An average full term baby weighs between 7-8 pounds and is between 19-21 inches long.  As unreal as it seems, it is still legal to take this baby’s life through abortion.
I invited the congregation to reflect on the development of the baby while also thinking about the fact that at all stages of pregnancy a woman can obtain an abortion.  I think that it was a fact that many just didn’t know and couldn’t fathom.  After all, didn’t they just hear that at 3 months he can grasp an object placed in the palm of his hand?  And that at 4 months there is rapid eye movement signalling that the baby is dreaming?  What about the fact that at 7 months he is able to cry and his bones are fully developed?  How can it be then that it is legal to kill this child?   As we reflected on these ideas I played Ave Maria.  I reminded them of Mary saying yes to life.  She was willing to endure ridicule, judgment and possibly being alone.  Still, she brought our Savior into the world.  What better testament and role model can we have?
Following our reflection I introduced what our Catholic faith tells us about abortion and about what our duties are for protecting life.  In the Catechism of the Catholic Church we find the Church talking about abortion at line 2270 and continuing 2275.   We read these words:

2270 Human life must be respected and protected absolutely from the moment of conception. From the first moment of his existence, a human being must be recognized as having the rights of a person — among which is the inviolable right of every innocent being to life.

2274 Since it must be treated from conception as a person, the embryo must be defended in its integrity, cared for, and healed, as far as possible, like any other human being.

We prayed intercessory prayers and then I invited everyone present to come forward and light a candle in remembrance of all those who have died, all those who are struggling with the decision whether or not to abort their child and all those affected by the sin of abortion.   With quiet music playing in the background people came forward and lit a candle.  It was such a wonderful remembrance of so many innocent souls. 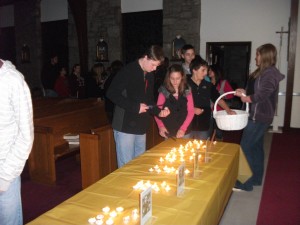 I would hear later from others that so many people’s lives were touched by what they saw and heard that night.  I also was disappointed to hear that there were some that were not affected at all.  Still, our goal was to spread the word and if we even touched one life then we did our job.  I’m positive we touched more lives than just one!

As Catholics sometimes we don’t do as well as our Protestant brothers and sisters regarding evangelization.  This is an area where we can not fail.  We are required by Christ to save the lives of the innocents.  We are required by God to protect those who can not protect themselves.  I realize that not everyone can organize a memorial service or that they even have access to banners or crosses or signs.  So how can you bring the issue of the sanctity of life to those around you?

Don’t be afraid to tell people that you are prolife.  I realize sometimes this is hard!  People will judge you, call you intolerant, they will persecute for your beliefs… speak up anyway!

If you can’t organize a prayer service or a stand for life, find where one is taking place and join in!  Show that you are prolife through your actions.

Volunteer at your local pregnancy resource center.   If there isn’t one around you find another establishment that is doing the good work of the pro life movement and ask what you can do to help.  If you can’t volunteer your time, make a donation.

Teach your children our faith and our values.  Tell them that all life is sacred and then show them you respect life.  The younger they are when they learn just how precious life is the greater the chance that they will grow up always respecting life.

It is so important that we, as Catholics, live our faith as Christ established it.  God loved us so much that he became one of us.  He didn’t come as an adult, he came as an innocent baby, helpless in every way, depending on his mother to protect and nurture him.  Because he made us in his image he asks no less of us than he did of his very own mother.   What are we doing to answer his call?

3 Replies to “Remembering the Innocents”