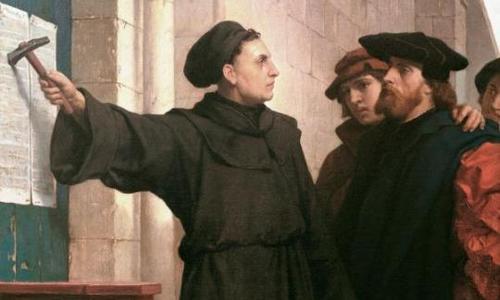 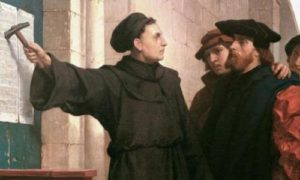 Today marks one day shy of 495 years since Martin Luther first initiated what would become known as the Protestant Reformation, by nailing his ninety-five theses—protests against the Catholic Church—to the door of All Saints’ Church in Wittenburg, Germany. Many Protestants around the world celebrate or publicly acknowledge today, October 30th, as Reformation Day. I have witnessed many evangelical Protestants elevate today as a joyous day in Church history, claiming that Martin Luther was led by God in his disputes.

But what did Martin Luther stand for, exactly? Indeed, most Catholics and Protestants alike associate him with his “five solas” of the reformation, particularly sola fide (faith alone) and sola scriptura (Scripture alone). These two tenants continue to be the dividing line between Catholics and Protestants, as Catholics continue to hold to the same Teachings the Church did for the 1500 years before Luther: justification by both faith and working out our salvation with fear and trembling (Phil 2:12) and the acknowledgement of the Teachings of God preserved both by letter (Scripture) and by word of mouth (2 Thess 2:15).

Most evangelical Protestants focus on these issues when they praise Luther for his initiation of the reformation, but they seem to ignore the many beliefs Luther also publicly affirmed that the same faith communities vehemently reject. Following is a list of beliefs and accompanying quotes from Luther that leads to the undeniable truth that if he were to return to Earth today, he would not stand in favor of the vast majority of modern Protestantism.

Modern evangelical Protestants, when faced with Matthew 16:18-19 in which Jesus establishes the Church on Peter, have various different interpretations to explain this event taking place. The most common is that Jesus is establishing his Church—an invisible unit comprised of all saved Christians—on the faith of Peter, not on Peter’s himself or on his authority. They also have a myriad of interpretations of what the “keys” might be referring to. However, in one of Luther’s written works, The Keys, in Conrad Bergendoff, written five years after he left the Church, he acknowledges himself what many of his modern admirers deny:

“So we stand here and with open mouth stare heavenward and invent still other keys. Yet Christ says very clearly in Matt 16:19 that he will give the keys to Peter. He does not say he has two kinds of keys, but he gives to Peter the keys he himself has and no others. It is as if he [Christ] were saying:’ why are you staring heavenward in search of the keys? Do you not understand I gave them to Peter? They are indeed the keys of heaven, but they are not found in heaven. I left them on earth. Don’t look for them in heaven or anywhere else except in Peter’s mouth where I have placed them. Peter’s mouth is my mouth, and his tongue is my key case. His office is my office, his binding and loosing are my binding and loosing’ ”

The Protestants’ disbelief that the Scriptures point to Jesus establishing a physical Church on Peter’s authority lead to a disbelief that the Catholic Church is the original Christian Church who first passed on Christian Teachings and canonized the New Testament Scriptures. While there are a number of different theories within evangelical Protestantism as to when the Catholic Church began and who the first pope was, Luther maintained that indeed, she is the historical Church of the apostles from which all other forms of Christianity derive:

“We concede — as we must — that so much of what they [the Catholic Church] say is true: that the papacy has God’s word and the office of the apostles, and that we have received Holy Scriptures, Baptism, the Sacrament, and the pulpit from them. What would we know of these if it were not for them?” (Sermon on the gospel of St. John, chaps. 14 – 16 (1537), in vol. 24 of Luther’s Works).

In an attempt to disassociate themselves with the Catholic veneration of Mary, modern evangelical Protestantism have gone to the other extreme, in which there is little public recognition of her aside from Christmas time, where she seems to have been relegated to merely a minor role in the nativity story. Luther, if he were here today, would want nothing to do with such discarding of the woman whom he affectionately referred to as “the holy Mother of God …the woman who crushed the Serpent’s head” (sermon at Whittenburg, January 1546). What else did Luther, as a new Protestant teacher, have to say about the blessed Mother?

The Mother of all Christians:
“It is the consolation and the superabundant goodness of God, that man is able to exult in such a treasure. Mary is his true Mother … “(Sermon, Christmas, 1522)

“Mary is the Mother of Jesus and the Mother of all of us even though it was Christ alone who reposed on her knees . . . If he is ours, we ought to be in his situation; there where he is, we ought also to be and all that he has ought to be ours, and his mother is also our mother.” (Sermon, Christmas, 1529).

Conceived without Sin:
“It is a sweet and pious belief that the infusion of Mary’s soul was effected without original sin; so that in the very infusion of her soul she was also purified from original sin and adorned with God’s gifts, receiving a pure soul infused by God; thus from the first moment she began to live she was free from all sin” (Sermon: “On the Day of the Conception of the Mother of God,” 1527).

“She is full of grace, proclaimed to be entirely without sin- something exceedingly great. For God’s grace fills her with everything good and makes her devoid of all evil.” (Personal {“Little”} Prayer Book, 1522).

Perpetual Virgin:
“Christ, our Savior, was the real and natural fruit of Mary’s virginal womb . . . This was without the cooperation of a man, and she remained a virgin after that.” (Sermons on John, chaps. 1-4, 1539).
“A new lie about me is being circulated. I am supposed to have preached and written that Mary, the mother of God, was not a virgin either before or after the birth of Christ . . .” (That Jesus Christ was Born a Jew, 1523).

Worthy of Respect:
“The veneration of Mary is inscribed in the very depths of the human heart.” (Sermon, September 1, 1522).

One should honor Mary as she herself wished and as she expressed it in the Magnificat. She praised God for his deeds. How then can we praise her? The true honor of Mary is the honor of God, the praise of God’s grace . . . Mary is nothing for the sake of herself, but for the sake of Christ . . . Mary does not wish that we come to her, but through her to God. (Explanation of the Magnificat, 1521).

Historical writings from the early Church fathers make it plain that the first Christian Church believed in the literal presence of Christ in the Eucharist, when offered by a bishop or minister of the bishop. Despite such early writings, evangelical Protestants remain firm in the belief that Jesus was speaking metaphorically, encouraging his followers to take place in a symbolic memorial service with bread and wine. While Martin Luther had ninety-five problems with the Catholic Church, True Presence was not one of them.

Huldreich Zwingli was a reformer around Luther’s time who gained a band of followers from his proposition that the bread and wine only represents Christ. Luther forcefully disagreed, saying instead, “I would rather drink blood with the papists, than mere wine with the Zwinglians”. Further, he makes the bold assertion that only the devil would cause one to choose not to take to the clear words of Jesus in Scripture as literal, citing the early Church fathers as evidence:

“Who, but the devil, has granted such license of wresting the words of the holy Scripture? Who ever read in the Scriptures, that my body is the same as the sign of my body? or, that it is the same as it signifies? What language in the world ever spoke so? It is only then the devil, that imposes upon us by these fanatical men. Not one of the Fathers of the Church, though so numerous, ever spoke as the Sacramentarians: not one of them ever said, It is only bread and wine; or, the body and blood of Christ is not there present.” (–Luther’s Collected Works, Wittenburg Edition, no. 7 p, 391).

A common response from evangelical Protestants to all of the aforementioned words from Luther is along the lines of, “Why is it relevant that Luther thought those things? I don’t believe that his words are the Word of God, so I don’t have to believe everything he taught.”

The reason these quotes are relevant is because the same Protestants will also claim Martin Luther to have been driven by God in his personal interpretation of Scripture that concludes justification by faith alone and authority in Scripture alone. That then presses the question, how do they know Martin Luther was led by God in those areas, when they also believe him to be so wrong in others? Does it really stand to reason that the man who believed in so many tenants of faith that they strongly reject would be correct only in the areas of the ninety-five theses, even when the preceding 1500 years of Christianity never taught them? Further, if evidence shows that Martin Luther would not condone of the fundamentalist views of communion, Mary, and church history, then such Protestants must question the credibility of their faith community which is historically the result of several break-offs after the original Protestant reformer.

Luther lived to see the fruits of his work in spreading the belief that an established, authoritative priesthood is not necessary for Christianity. He observed, “There are almost as many sects and beliefs as there are heads; this one will not admit Baptism; that one rejects the Sacrament of the altar; another places another world between the present one and the day of judgment; some teach that Jesus Christ is not God. There is not an individual, however clownish he may be, who does not claim to be inspired by the Holy Ghost, and who does not put forth as prophecies his ravings and dreams.”

Luther’s philosophy that authority rests with the community of believers who interpret Scripture on their own, rather than the bishops of the original Christian Church, crumbles under his own admission. When each individual personal interprets Scriptures based on their own reader influence and convictions, the result is a plethora of denominations, sub-sects, and free-standing faith communities who are in disagreement with one another.

Today, there are worldwide tens of thousands Christian groups, all who claim to be Bible-believing and inspired by the Holy Spirit, yet contradict each other left and right. This disunity amongst Christ’s family is the largest affect brought about by today in history, Reformation Day, and arguably the most tragic to the Body of Christ.

“I never approved of a schism, nor will I approve of it for all eternity. . . . for it is not by separating from the Church that we can make her better.” –Martin Luther to Pope Leo X, January 6, 1519

6 Replies to “Reformation Day: What the Original Protestant actually Taught”