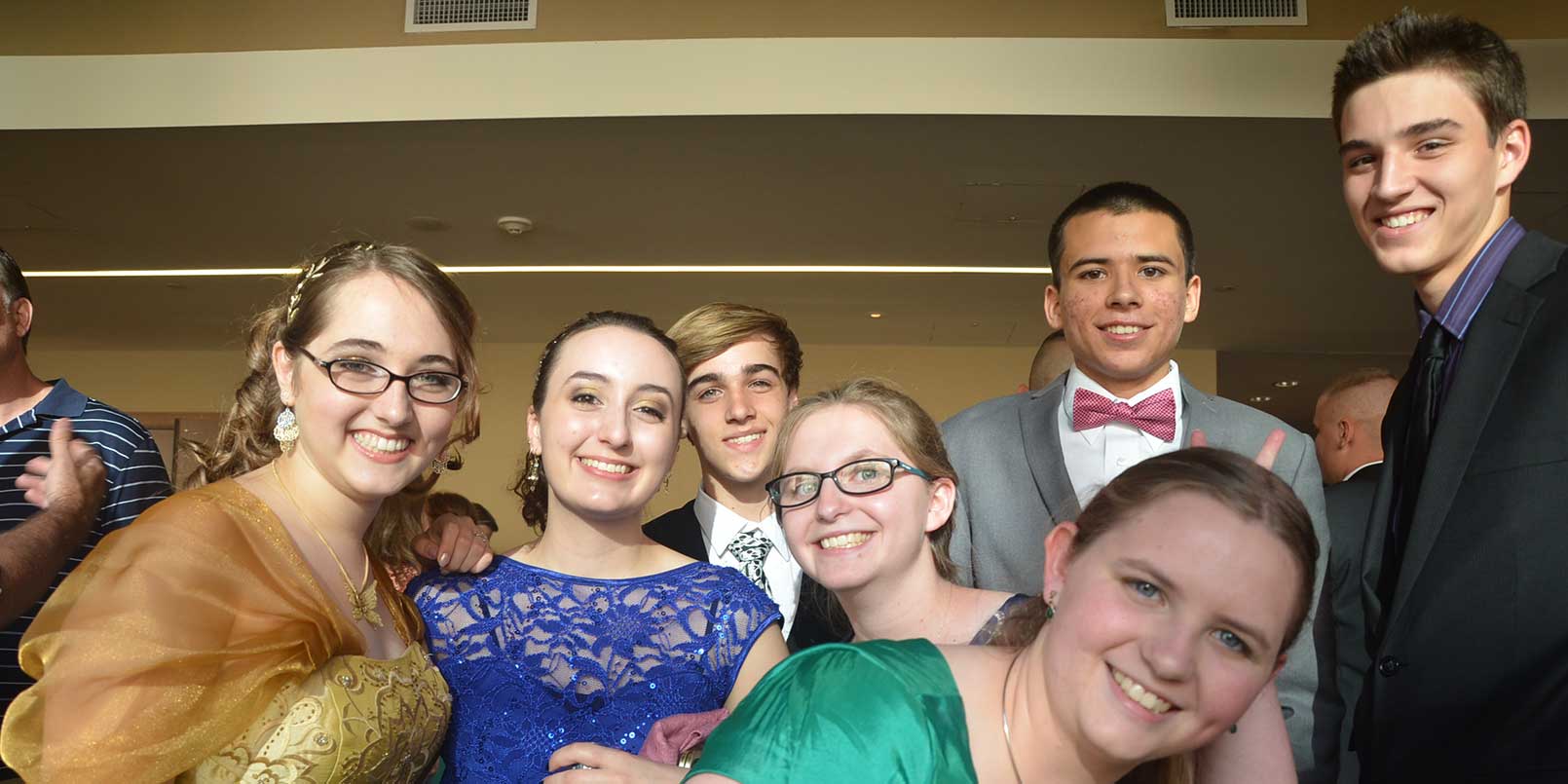 A few years ago around this time of year, I made an inquiry on my Facebook Status, “To Prom or not to Prom, that is the question”. I figured I might get a few responses, but after 36 comments over the course of 3 days from 21 different people, it seems there was no lack of opinions and interest in this subject. So I wrote a blog post about how we came to the decision for our oldest daughter.

The question I asked was not really fair to my friends, since I didn’t provide all the information required to really answer the question.

Based on the responses I received, it seems that there were two areas that people came from to make their recommendation, the event itself and the moral effect this event may have on my daughter and whether or not my daughter should go to a dance with a young man. In reality, both of these areas of concern were used to make our decision about whether our oldest daughter would attend the local high school prom with our neighbor’s oldest son.

A Partnership with our Daughter

I would like to begin by saying that our decision was made in partnership with our daughter, she was at the age where she had quite a bit of say in the activities in which she chose to participate, as her parents we provided guidance, and not ultimatums. Boundaries still exist and most are set by God and a few were set by us since she was still living in our home.

First of all I want to say that I am very proud of the young woman she has become and I have the utmost faith in her and her decisions. The question was never about whether or not she would attend the Prom and decide in one night to abandon her morality and rebel against us because she saw a different way of life and decided to embrace it. I certainly hoped we had done a good job of presenting Christianity and forming our children to be good Catholics. God is not some overbearing authority that says live this way or I will punish you; on the contrary, He presents us with a choice between life and death, between choosing God or choosing the world. We have hopefully taught our children that the good news proclaimed by Christ is freedom from sin and that this will lead to true happiness. We have confidence that the faith that we pledged to impart on our daughter at her baptism has been accepted by her as a young adult and that she not only embraces that faith, but also desires to bring light to those around her and share the good news of the gospel.

The Dangers of the Prom

The dance itself, while it may not cause my daughter to abandon her moral convictions, does need to be evaluated to determine if it is a good event to attend. For example, I would not attend a dance if the music being played was going to be offensive to my moral convictions. I would also not attend a dance if I could reasonably expect that the dancing would be lewd and sexually suggestive. I would also not attend a dance if those who were attending would be drinking excessively and thus acting as drunk people normally act. So there are certain events, through personal experience, that I would not attend because I would have concern for my own personal safety or my sense of decency would be insulted. I am sure each of you also can think of places or events that you would not partake in due to issues such as the ones listed above. Yes, it is a judgement call, and God made us this way, to judge whether or not something is good for us or not.

Based on personal accounts from friends who have been chaperones at this particular school’s proms in the past and based on the Prom Agreement Form, there must have been some pretty bad things happen at the Prom in the past including, use of tobacco, alcohol, and drugs by participants, immodest dress, and inappropriate dancing (lap dances, bumping and grinding and any other movement that appears to simulate sexual acts), and indecent exposure and/or removal of under garments. (this was all prohibited in the school’s Prom Agreement that both parent and child were required to sign).

Dating, What is it Good For?

Our children do not do recreational dating. I know this is a very foreign idea to most people I know. It is not how I nor my wife was raised, we both dated and dated each other and got married. Today, dating is the normal way to meet your future spouse. There are some common questions/criticisms I hear when I tell people that our children will not date.

We assure people that we do desire our children to meet members of the opposite gender, to get married (probably sooner than those who date) and have fulfilled lives despite their lack of participating in the dating game.

So why do we not wish for our children to date? The answer is that we believe that dating is not an activity that will produce the desired results while helping our children to avoid the near occasion of sin. While societal norms have strayed greatly from the moral teachings of Christ, we do hope that we have equipped our children to rise above the peer pressure that exists to the contrary.

We believe that dating is practice for divorce. Think about it, you go out with someone for a period of time, if you are following God’s laws, you don’t get physically intimate with the other person, but most dating relationships today do involve quite a bit of physical intimacy, if not intercourse. So the couple gets emotionally involved, sometimes very involved and then at some point (since most young people date more than one person in their quest for a spouse) breakup and stop seeing each other. Feelings are hurt, friends are lost and the young people grieve or rejoice (depending on if they were dumped or were the dumper – note the common terminology used) and move on to the next person who they find attractive.

The common response to this criticism is that you need to play the field to get to know lots of different people so you can figure out what you like in someone you would like to marry. If you don’t shop around, you may not know what you are missing. This is a flawed understanding of courtship. Courtship is not living in a vacuum and not interacting with potential spouses, you do it on a regular basis. But you shop around with friends. You guard your heart and your physical intimacy so that your feelings don’t cloud your judgement. The Courtship model actually helps you to shop around more effectively. This mode of interacting with members of the opposite gender requires not only physical chastity, but also emotional chastity. Emotional chastity may be more difficult as it requires guarding your thoughts as well as your actions. But we can take solace in the words of Christ found in the Gospel that call us to observe the sixth commandment concerning adultery, but also to avoid lust in our hearts. If Jesus called us to live in this way, then the Holy Spirit will enable us to be successful.

For a more thorough explanation of our ideas on Dating, please see my two articles on this subject: Let’s Talk about Dating and How to Avoid Heartache in Dating.

So we met with the young man and got to know him a little better. Even though we have been neighbors for a few years, we had not interacted with him or his family much prior to his Prom invitation. I spoke with him and shared our views on dating and emphasized that our children do not date in the traditional sense and thus if my daughter were to accompany him to Prom, that it would be as a friend. We also discussed the parameters in which he would need to agree to abide if he were to take my daughter to Prom (no after parties, no drinking, etc). I shared with him the obligation and duty I have to protect my daughters and sons from both physical and spiritual harm and my duty to protect their honor. I told him that if Rachel would go with him to Prom that he would be agreeing to take on this role for the evening. He listened attentively and agreed to do his best, and I have no reason to doubt his sincerity, so we gave our permission for our daughter to attend.

While I felt comfortable that my daughter’s friend would keep his word, I also knew what it was like to be 18 and that sometimes it is hard to discern when a situation is making someone else uncomfortable. So I signed up to be an official chaperone at the Prom for the first two hours. I must emphasize that my being a chaperone is in no way a statement of mistrust of either my daughter or her friend. I did not spy on them while they were at the Prom, I observed the environment and did what I could to make sure that it was “family friendly” and free of the activity cited in the Prom Permission form. I sincerely hoped that my daughter would have a good time, and that it would be a positive experience for both of them (since neither has been to a Prom before). Our daughter had been to a homeschool formal before and had a great time, the coordinators of the Homeschool Formal consistently do a great job, they require dance lessons prior to the formal by all attendees, they have dance cards to ensure that no one feels left out and that everyone gets to meet people other than the person who escorted them to the formal, and most of the attendees are strong in their Christian morals. We look forward to their report and Rachel’s opinion on which formal event was better.

What are your thoughts on Prom? What have you done when faced with a similar situation?

Turns out my fears about the nature of the Prom were justified, I witnessed all the rules being broken, except for alcohol abuse (which may have occurred).  Please read my follow up article for all the sordid details.

2 Replies to “To Prom or Not to Prom”