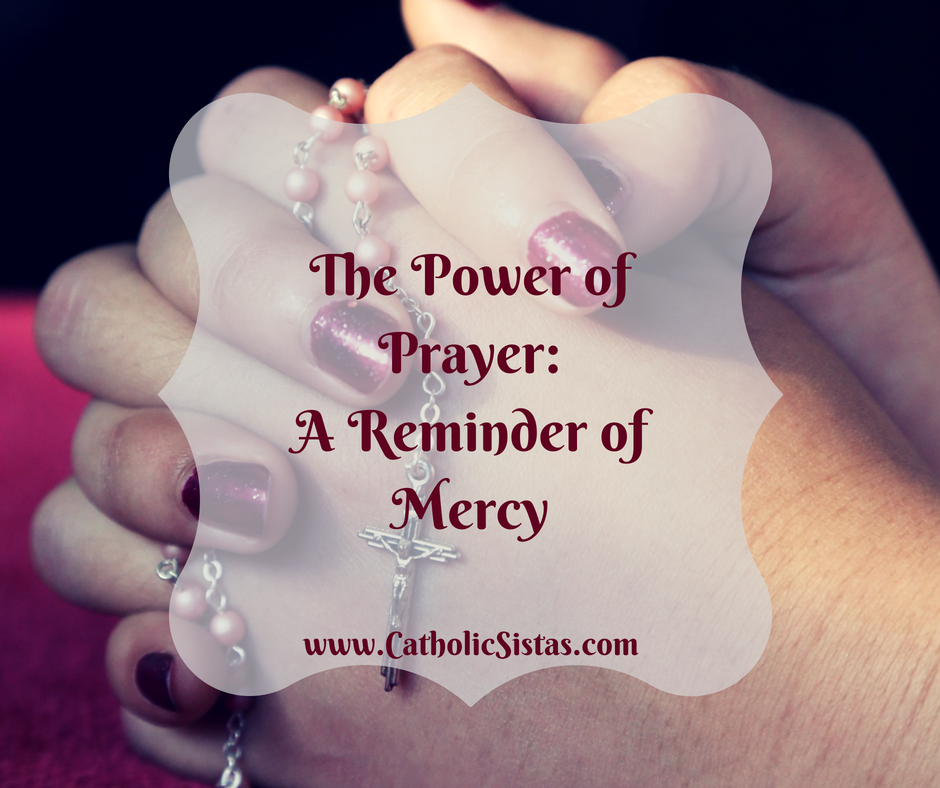 A couple months ago, my husband and I received some news which made me deeply question my Catholic identity. In short, it was a period I found myself struggling with Church teachings, and I was angry with God. I was taking it to Him in prayer on a daily basis, and while I would leave room for Him to answer, it wasn’t a clear answer. Life would have been so much easier if He had said, “Anni, I want you to do, or not do, this,” but of course, He doesn’t typically make things that clear.

While I struggled, and while life caught up with me, I found myself distancing from the routine devotions I try to spend time praying. The Divine Mercy Chaplet and the Rosary were set aside while I poured forth from the depths of my angry heart. Even when I picked up my beads to pray these prayers, I would get angry, and set them back down. The desire to pray them was not even present.

The last day of May, a fellow Catholic Sistas writer reached out to me in a private message, inviting me to participate in the 31 Day Divine Mercy Challenge being held during the month of June.

Her reaching out to me, combined with the repeated failed attempts to pick up my Rosary beads and actually pray, led me to grudgingly acknowledge I was being led to spend time praying the Divine Mercy Chaplet again. So, while it was last minute, and we were in the thick of a move, I accepted that 31 Day challenge.

Within a week, peace settled into my heart over the situation which had led me to be angry. I experienced several epiphanies regarding the situation. And, while I will carry the cross that He has handed me for quite some time, there is peace in my soul about the situation and the resolution.

As I solidly entered into the second week of praying the Divine Mercy Chaplet, during the recitation one day, my thoughts turned to a phrase not even found in the chaplet – “The Lord is slow to anger.” Based on Psalm 103:8, “Merciful and gracious is the Lord, slow to anger, abounding in mercy,” I began to consider during that day’s recitation the many ways in which we, as a collective human race, have had occasion to anger God. Yet, through all the moments we have occasion to anger Him, He patiently waits for us to turn back to Him. 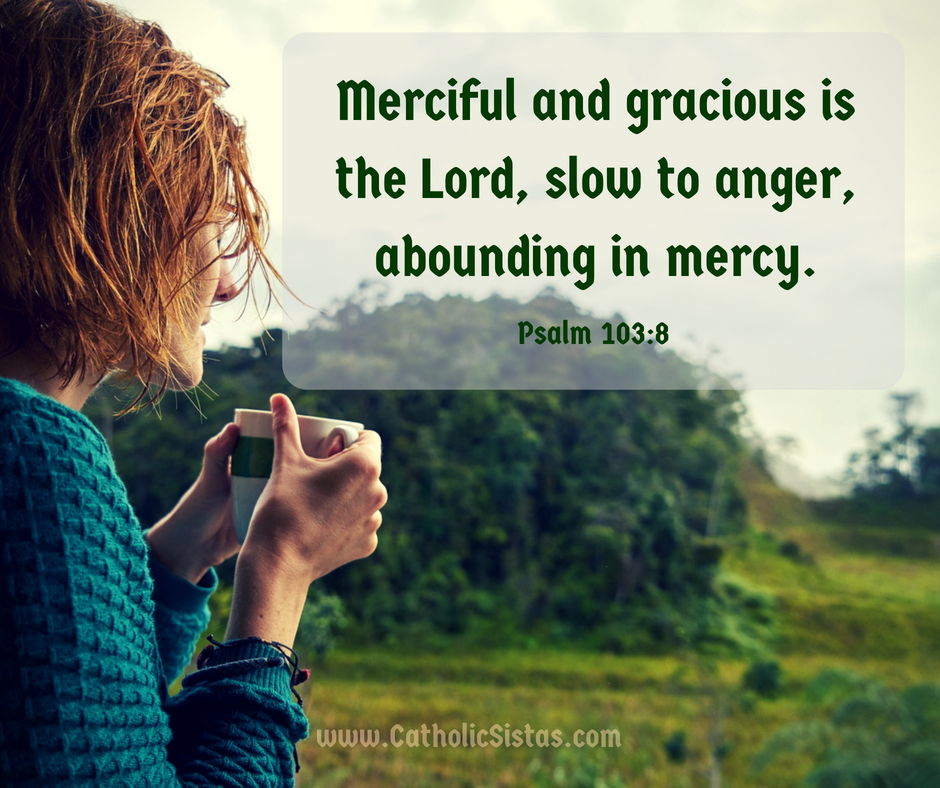 Let’s face it – human beings are flawed. When we face temptations, we have a tendency to (hopefully) come out batting a 50% average – half the time we fall into temptation, half the time we are able to stand faithful to God’s desires. We make false idols out of so many things these days, we engage in activities which make God upset, and we sometimes overlook our relationship with Him for a relationship with others. In short, we all sin, and we all sin repeatedly.

And yet, the fact we are alive today, living in our world at the moment we are, is solely because God had, and has, faith in our ability to overcome the adversity and temptation! He knew precisely what He was doing when He decided we would be in the world today. He knew the obstacles we would be facing, and He knew the challenges we would experience as part of a journey toward our eternal reward.

God is perfect. He is omniscient. He knows us better than we know ourselves. And, as the perfect parent, He has faith in us.

As humans, we waiver so much, going back and forth. It’s difficult to always make an executive decision. And yet, God has faith in our abilities to make the correct decisions. Even when we are finding it difficult to follow the path which will lead us closer to Him.

We are right to focus on the eternal reward. We are right to make decisions based on eternity – in fact, Our Lady of Fatima has been credited with saying, “If men only know what awaits them in eternity, they would do everything in their power to change their lives.”

However, focusing on the eternal reward, and worrying about reaching that eternal reward are two entirely different concepts. As St. Padre Pio is credited with saying, “Pray, hope, and don’t worry. Worry is useless. God is merciful and will hear your prayer.”

Too often, humankind gets hung up on the worrying aspect of life – and, we fail to adhere to the prayer and hope that St. Padre Pio encourages. Living with a focus on the eternal means we aren’t making lighthearted decisions. Rather, we are living intentionally, and discerning major decisions, aware of not just what is being told to us through the whispers of our secular society, but also aware of the greater, more lasting ramifications of the outcome of our decisions.

And, ultimately, focusing on, rather than worrying about, the eternal reward also gives us reprieve. It gives us a chance to heed Jesus’ words to St. Faustina, “Look into My Heart and see there the love and mercy which I have for humankind, and especially for sinners. Look, and enter into my Passion.” 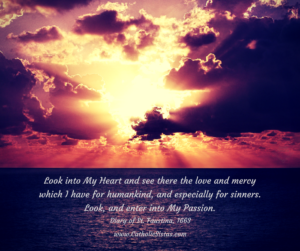 Through our life’s experiences, and the decisions we intentionally make, we are fully able to join ourselves with Jesus, and to envision the love and mercy He extends by virtue of His Passion. We are able to vividly imagine the Sacrifice He made for love of our souls – for a shot with spending all of eternity with us.

And, He encourages us to bring our anger, our sadness, our troubles to Him. God knows our weaknesses and doubts – and, He has faith in our ability to turn to Him when we experience those emotions and when we hear the doubt creeping in to our hearts.

A chaplain pointed out during his homily a while back that a saint isn’t called to live a perfect life. Rather, a saint is a sinner who continuously picks themselves up after erring, and relies on the mercy of the Lord. Saints in the making learns from their mistakes, and commits themselves time and again to correcting their ways. The souls who are oriented toward God and His infinite mercy are the ones who acknowledge their difficulties and weaknesses, and yet continuously search to build the relationship with God.

During the trials of life, it is common for individuals to turn away from God. Yet, Pope Emeritus Benedict XVI said it best, “The world offers you comfort. But you were not made for comfort. You were made for greatness.”

God offers us the chance at the perfect relationship with Him – warts and all. And, He shows us His infinite mercy as we take our anger or sadness to Him. We just have to open ourselves up to hearing His message of mercy, and accepting that mercy.

Rather than pointing out the flaws in my thinking as I angrily spoke to Him, He allowed me the chance to wallow in my misery. Like a parent who turns to a child throwing a tantrum and quietly asks, “Are you finished, yet?” God gently called back to me, asking me if I was ready to heed His call in my life.

The comfort I have found in His gentle consistency, and His reminder of mercy has been astounding. And, while I don’t know if the choices being made in life are the correct ones, I am able to fully embrace His message of love and mercy, and ultimately, rely on His love and mercy – not just for myself, but for all of mankind.

How has praying either the Divine Mercy Chaplet or the Rosary impacted your life? Has there been a time in which the struggle in your life was diminished through the power of prayer? I would love to hear!