I’m a Catholic.  A Cradle Catholic.

I first had God’s living grace poured into my soul as a newborn at baptism.  I was raised going to Mass every Sunday and Holy Days, received all of my Sacraments on time and participated in catechism classes and youth group.  Through all of that, I managed to absorb about as much knowledge about my faith as if I hadn’t been there at all, but my parents did what they could to keep my soul in a state of grace, as good Catholic parents do.

I married a Protestant Christian.

For a long time I didn’t really know what that meant.  Even after we were married, I still didn’t know what divided our traditions.  My husband, too, had been raised faithfully Christian, however he had never found a church home in college (when and where we met).  So although he’d sometimes come to Mass with me, I wasn’t able to go to service with him until well after we were married.  It wasn’t until I was pregnant with our third child that my husband joyfully found a church home, where he’s been an integral part of the community ever since.

For the past many years we’ve attended 9 am Mass at my parish, then attended 11 am service at my husband’s church (which is about 2 miles down the street) and we hit our favorite donut shop in between.

Sunday after Sunday, I hear Monsignor preach about the Real Presence of Christ in the Eucharist and the reality of intrinsic evil in our world now being passed off as inherently good.  Half of Mass is spent in the Liturgy of the Word with Scripture readings and a homily, and that is followed by worshipping the physical Christ during the Liturgy of the Eucharist.

Then, Sunday after Sunday, I go to Bible Church to hear the senior pastor issue the reminder that you must “Put your faith alone, in Christ alone, for the forgiveness of your sins” and offer earnest encouragement to become not just followers of Christ but disciples of Christ by continuing to grow spiritually.  The first half of the service is spent worshiping Christ in song, and that is followed by hearing a sermon explaining a passage of the Bible according to the book of Scripture currently being studied.

I’ve made a good deal of friends in my parish, faithful, educated, caring Catholic friends, and I have participated in several groups there.  I’ve also made a good deal of friends at my husband’s church, as they are as friendly and likable as all get out.  As a family, we participate in a small group Bible study there.  Combined, I’ve had a rare opportunity to deeply experience Christian life in both traditions for the last almost six years. 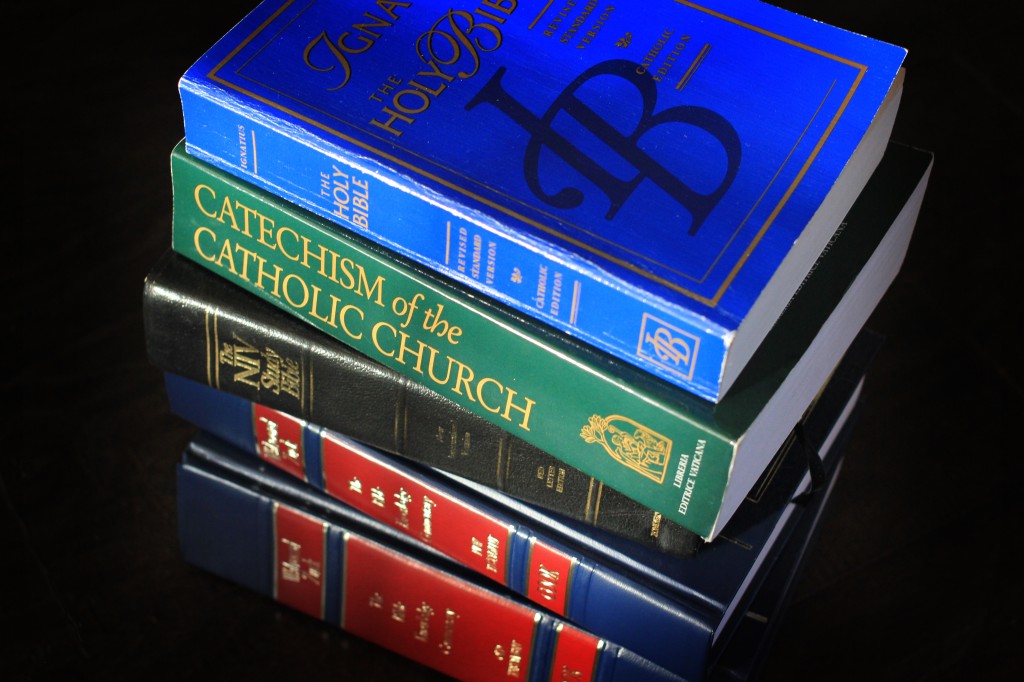 What exactly are our differences?

My husband and I were married in my current parish, and all of our children were baptized there as well.  It wasn’t until the baptisms of my children that I was finally pushed to figure out what divided myself and my husband, as infant baptism was one of the items on that list.  I knew the word “Reformation” and the name “Martin Luther”, so I started there (I’d never heard of John Calvin or Ulrich Zwingli!).  I used the internet to educate myself before eventually  finding books.  I would read Protestant explanations of why the Catholic teaching on something was wrong and why their teaching was Biblical.  I would also read the Catholic counter parts.  I had to discover that our traditions differed on the nature of Grace on the soul, the nature of Communion, the nature of Baptism, the nature of the Church, and the Canon of the Bible, just to name a few.  It took well more than reading a one-sided article on each of these subjects to develop an understanding of either side.  I read countless articles and resources from both sides about their own position and about each other’s.

Learning how to Learn.

I’m about a decade into a life long journey of learning.  I have found that without comparison, the most accurate way to learn about a particular tradition is by reading multiple sources about it from those who hold it to be true.  I have found that the least accurate way to learn about a tradition is to listen to its opponents, no matter how dignified, confident or sympathetic they may sound, and no matter how much I may like them.  One cannot accurately (fully and convincingly) teach about a position they do not hold to be true, even if they formerly held to that tradition.  The opponent will always fall short, often very short. 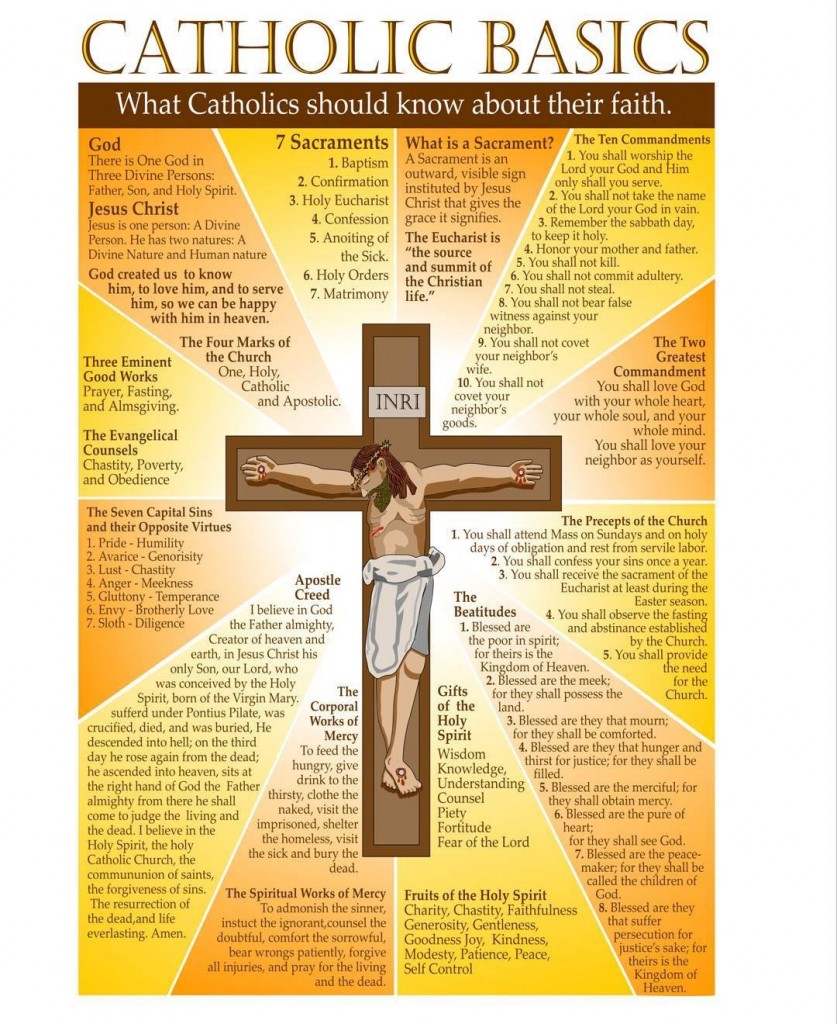 “Why were you Catholic?”

Over the last 10 years, if you had asked me why I was still Catholic the answer would have varied as I grew.  My first answer would have been “Because I was raised Catholic” with side sentiments that all faiths are true and didn’t matter much.  About midway through the last 10 years it would have been something like, “I feel Jesus’s presence more in Mass” without being able to articulate the Real Presence in the Eucharist.  During these last several years I would have answered why I was still Catholic with a litany of, “Church Authority, Salvation by Grace Alone, Justification by Faith and Works, Regenerative Baptism, the Real Presence in the Eucharist, a proper understanding of Mary, Praying in the Communion of Saints both on Earth and in Heaven, the teachings on Purgatory…” and I would have been eager to get into a discussion on them all.

“Why are you still Catholic?”

Lastly and perhaps most convincingly, because I was raised Catholic, when the time came for me to learn about Christian traditions, and to learn about the fullness of Christ’s teachings, I was free to explore Catholicism openly and fully.  I am deeply thankful I wasn’t hindered by being taught, “Christ is the way, the truth and the life” in the same breath as, “Catholicism is false.”  If I had, then naturally I would have avoided ever studying it with the intention to see if it could be true.

I have had the unique opportunity to freely explore what Catholicism really teaches from countless Catholic sources, both modern Catholics and ancient Church Father Catholics. When a Protestant source challenged me on the truth of a particular Catholic teaching, say veneration of the saints, I didn’t just accept the Protestant’s  well-articulated position as comprehensive.  Instead, I would go to not one, but several Catholic sources, to figure out what Catholics had to say for themselves.  It has been a time consuming journey in which few people would care to take.  However, I am ever grateful that I didn’t rely on non-Catholics, ex-Catholics or poorly formed Catholics to teach me about Catholicism, because I would have never discovered the real teachings of the Catholic Church.