Mother Teresa: A Lamp in the Darkness 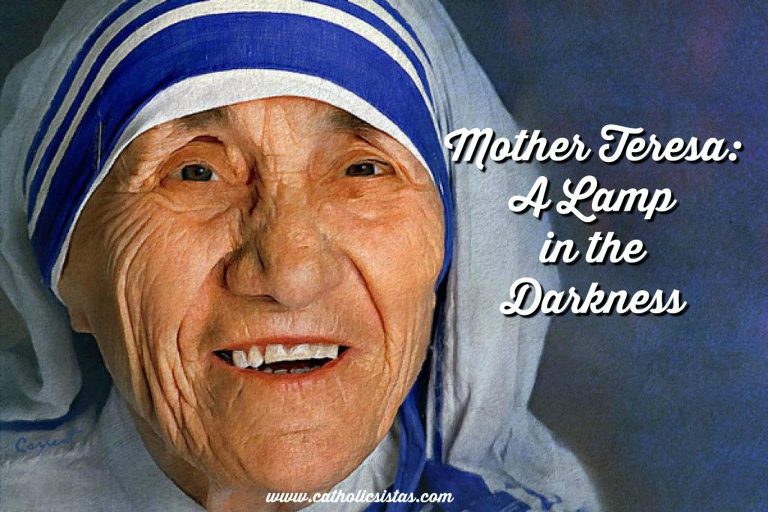 “Thy word is a lamp to my feet and a light to my path. I have sworn an oath and confirmed it,
to observe thy righteous ordinances. I am sorely afflicted; give me life, O Lord, according to thy word!-Psalm 119: 106-107

She founded a religious congregation. She served the poor with radical acts of Christian charity. She fought for the rights of the sick, the downtrodden and the unborn. She won the Nobel Peace Prize. And this week, she was canonized. Mother Teresa of Calcutta, a busy little ray of God’s light shining onto a jaded 20th century world.

But Mother Teresa’s achievements, however brilliant, are not what draw me to seek her intercession.  Instead, I find comfort and solace in what the holy nun did not achieve during her life on earth–a lasting spiritual peace or emotional experience of God.

During the same decades that Mother Teresa was changing the world with her presence, Christ was changing her with his seeming absence. With few instances of reprieve, her adult life, even until death, was marked by an extended period of agonizing spiritual dryness, the dark night of the soul. In 1957, she wrote:

“In the darkness . . . Lord, my God, who am I that you should forsake me?  The child of your love — and now become as the most hated one. The one — you have thrown away as unwanted — unloved. I call, I cling, I want, and there is no one to answer . . . Where I try to raise my thoughts to heaven, there is such convicting emptiness that those very thoughts return like sharp knives and hurt my very soul.  Love — the word — it brings nothing.  I am told God lives in me — and yet the reality of darkness and coldness and emptiness is so great that nothing touches my soul.” (Source)

Mother Teresa wasn’t the only one who had difficulty understanding the meaning of this painful struggle. Once her critics got wind of it, they used it repeatedly in their attempts to discredit her. The famous atheist Christopher Hitchens, who had gone so far as to testify against the nun’s case for canonization, wrote in Newsweek in 2007: “I say it as calmly as I can—the Church should have had the elementary decency to let the earth lie lightly on this troubled and miserable lady, and not to invoke her long anguish to recruit the credulous to a blind faith in which she herself had long ceased to believe.”

So why exactly should we rejoice in a life that was so full of inner pain? Why take comfort in the struggle of another? Why canonize someone who could not feel the light of God in her own life, who was dogged by doubts and darkness?

I’m no Mother Teresa, but as a Catholic with depression, I can relate to the hurt and confusion apparent in her writings. I can sympathize with her short periods of solace and sunshine, followed by long times of inner darkness. I can appreciate what it feels like to keep going day after day, stumbling and striving to do your best for a God whom you cannot feel. And I take great hope in the Church’s brave declaration that Christ does not abandon those who cannot sense him emotionally.

St. Teresa of Calcutta is indisputably in heaven, and her example is a lamp to the feet of all of us who travel in mental and spiritual darkness. If we continue to fight, continue to keep going, continue to believe and confess and pray and work and love, we too can ultimately triumph by the light of Christ.

Mother Teresa of Calcutta, pray for us!

Liz Schleicher is a Midwestern Catholic wife and working mama of one. Mental illness has visited her family to the third and fourth generation, and she battles to see the truth and beauty of each day. She blogs at St. Dymphna’s Daughter and leads the conversation on Facebook at Catholics with Depression.

« Lectio Divina: Twenty-third Sunday in Ordinary Time (2016)The Beautiful Mess of the Family: An Interview with Bill Donaghy »