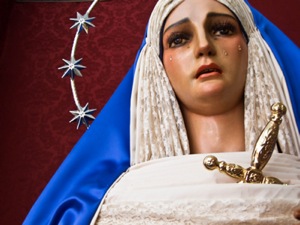 In many non-Catholic Christian traditions, the time of year has arrived in which it is deemed acceptable to remember Mary, the woman who gave birth to Christ in a barn and laid him to sleep in a manger. Despite year-round condemnation of the use of statues to remember people and events in Church history, nativity scenes are being put on display in front yards and fireplace mantles, featuring small figurines of angels, the three wise men, Infant Jesus, and even St. Mary and St. Joseph.

As a way of disassociating themselves with what they perceive as an idolatrous focus on Mary, many of our Protestant brethren have retreated to the other end of the extreme, limiting Mary’s mention only to Christmastime. Even during, her role is portrayed as minor. Many evangelical Protestant Christmas plays will focus their attention on the angels, shepherds, and the three wise men as the lead roles, while Mary is portrayed by an actress wearing robes, sitting silently in the barn holding an infant—or sitting at a distance away from the infant who lays in the manger. There is little mention of the events leading up to this birth, such as her visit with Elizabeth, who upon noticing the presence of Jesus with Mary says, “Blessed are you among women, and blessed is the child you will bear” (Lk. 1:42); as such, there is little depiction of Mary’s proclamation in response, “My soul glorifies the Lord and my Spirit rejoices in God my Savior, for he has been mindful of the humble state of His servant. From now on, all generations will call me blessed” (Lk. 1: 46-48).

However, the small role Mary plays around Christmas time is very generous in comparison to the amount of attention given to the Blessed Mother throughout the rest of the year, despite the focus on other Biblical women who serve as godly examples, such as Esther, Leah, or Sarah. This raises the question for these Sola Scriptura Protestants, where in the Bible is their backing for this purposeful discarding of Jesus’ Mother? Though I was taught to back everything up with Scripture alone in my own evangelical Protestant days, it never occurred to me to find in Scripture where it says anything on the lines of “pay no mind to Mary, for she can do nothing for you”. Mary was simply associated with “unbiblical” Catholic traditions, and we wanted no part of that.

As the Church Teaches and Scripture confirms, Mary’s role in our Christian life begins before and continues beyond her labor and delivery in the barn. Mary, having physically carried Jesus into the world, is the Ark of the New Covenant.  Just as the Ark of the Old Covenant was made of pure gold, not to be touched with man’s bare hands lest it become blemished (Ex. 25:10-21), the Ark of the New Covenant was also prepared by God to be the personified version of gold and unblemished: born without the stain of original sin. Not through her own power, but through God’s preparation for her to carry the New Covenant into the world. This belief does not elevate Mary to a level of worship, but magnifies our deep love for Jesus: would we want any less than perfect for our God?

Mary is not the first to be conceived without sin; as we read in the book of Genesis, Eve was also created without the stain of original sin. However, upon her failure to uphold this pure life, she brought sin—and therefore death—into the world. Mary, having also been born without the stain of original sin, becomes humanity’s second chance. In upholding her sinless state through God’s power, she brings Jesus—and therefore life—into the world.

The early Church fathers wrote extensively about Mary as the “New Eve”:

“the knot of Eve’s disobedience was loosed by the obedience of Mary. For what the virgin Eve had bound fast through unbelief, this did the virgin Mary set free through faith.” –St. Irenaeus, 180 AD

“For Eve, who was a virgin and undefiled, having conceived the word of the serpent, brought forth disobedience and death. But the Virgin Mary received faith and joy, when the angel Gabriel announced the good tidings to her that the Spirit of the Lord would come upon her, and the power of the Highest would overshadow her: wherefore also the Holy Thing begotten of her is the Son of God; and she replied, ‘Be it unto me according to thy word.’ And by her has He been born, to whom we have proved so many Scriptures refer, and by whom God destroys both the serpent and those angels and men who are like him; but works deliverance from death to those who repent of their wickedness and believe upon Him.”  –St. Justin Martyr, 160 AD

It may be easier to convince our Protestant brothers and sisters that Mary is the unblemished Ark of the New Covenant and the New Eve than it is to convince them that Mary cares deeply about each one of us and is an active part of our lives. The many visits from Mary and the miracles she performed in Lourdes, Guadalupe, and the others are not readily believed, and many even venture to state that her appearances are demonic spirits under the guise of the Virgin Mary.
The account of St. John in his Gospel, however, makes it plain that Mary is our Mother, given to us by Jesus Himself at His crucifixion:

“When Jesus saw his mother there, and the disciple whom he loved standing nearby, he said to her, “Woman, here is your son,” and to the disciple, “Here is your mother.” From that time on, this disciple took her into his home.” –John 19: 26, 27

I want to end with this note to any Protestants who may be reading this message; I imagine you may be feeling very defensive and perhaps angry or saddened, as you perceive we are encouraging an emphasis on Mary instead of Jesus. Please do not have this impression; Mary never points to herself, but only to her son. A relationship with Mary cannot subtract from your relationship with God; it can only enhance it.

“Never be afraid of loving the Blessed Virgin too much. You can never love her more than Jesus did.” –Saint Maximilian Kolbe

2 Replies to “Mary: More Than a Minor Role in the Christmas Story”