One thing that I look back now and laugh about after a decade as a Catholic is just how naive I was when I first converted. Though I was almost 30 at the time and had grown up attending Baptist and Presbyterian churches, I was like an ignorant child when it came to the theological differences among Christians. I’d been Catholic for nearly a year, for instance, before my Baptist friend startled me by saying, “I’m sure Mary had her hands full with all those kids.”

“What do you mean?” I asked, having no idea who she was talking about.

“You know…all of his little brothers and sisters she and Joseph had later on,” she explained, adding a bit smugly, “It’s in the Bible.” 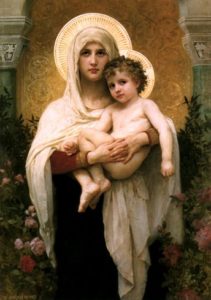 Back then, before I’d spent much time with my Bible, hearing that Scripture contradicted what I’d learned as a  convert was alarming. So that night, I got out my Bible and looked up the passages my friend had pointed to as evidence Jesus was simply the first child born into a large Catholic family.

The most frequent verses she cited referred to Jesus as having “brothers” and “sisters.” Not only that, she said, but Matthew 1:26 said Joseph didn’t know Mary (in the Biblical sense) until she had her “firstborn son.” The implication being, of course, that you don’t refer to a firstborn unless there’s more than one.

In time, I learned that most Protestants today believe as my Baptist friend does: that Mary, while a virgin until Jesus was born, lived an essentially normal married life with Joseph after the birth, making the Catholic claim that she was a “perpetual virgin” for her entire life almost laughable.

But then I started digging. And I discovered that just as with every other challenge to our Catholic faith, the teaching about Mary being a lifelong virgin was fully defensible. Not just from Scripture, but historically and rationally, too. (What a relief that was to my newly Catholic soul!)

First, I learned that the term “brother” (Greek: adelphos) has a wide meaning in the Bible and isn’t restricted to the literal meaning of sibling. The same goes for “sister” (adelphe). In the Old Testament, “brother” could refer to male relatives through marriage, kinsmen, friends, or even political allies:

There were good reasons that the words brother and sister had such wide meaning among the Hebrews. To begin, neither Hebrew nor Aramaic has a specific word for “cousin.” To refer to a cousin, Jesus would have had to say “the son of my mother’s brother.” But such descriptions are clumsy, so the Jews often used the word brother for brevity’s sake. To determine the relationship of someone referred to as a brother, sister, or a group of “brethren,” you have to look at the context of the Scriptures, as we see above with the example of Lot.

Even beyond semantic and linguistic arguments, however, we don’t find even reasonable evidence in the Bible that Mary had any children other than Jesus. In fact, all the evidence points to him being her ONLY child.

#1—FINDING IN THE TEMPLE—NO HINT OF OTHER CHILDREN
Nowhere in the passage describing Mary and Joseph finding Jesus in the temple is there even a vague hint of them having other children. Notice that both Mary and Joseph went looking for Jesus. If they had had other children–other, younger children–it’s hard to imagine both parents would have left all their children to go off searching for their oldest. As any couple with several children can tell you, “divide and conquer” means one parent (usually Mom) stays home with the little ones while the other (usually Dad) goes to look for the errant ‘tween.

#2—“THE” SON OF MARY
More evidence that Jesus was the only child of Mary is that the people of Nazareth referred to him as “the son of Mary” in Mark 6:3, not as “a son of Mary.” In fact, others in the Gospels are never referred to as Mary’s sons, not even when they are called Jesus’ brothers. If they were in fact her sons, it’s strange they were never mentioned in connection with her the same way Jesus is.

#3—ATTITUDE IS OF OLDER RELATIVES
The attitude taken by the “brethren of the Lord” implies they are his elders. In ancient and, particularly, in Eastern societies (remember, Palestine is in Asia), older sons gave advice to younger sons, but it was considered disrespectful for younger to give advice to older. (Joseph’s older brothers were so incensed by his dreams of having authority over them that they wanted to murder him but settled for selling him into slavery, remember?)

But we find Jesus’ “brethren” saying to him in John 7:3-4 that Galilee was no place for him and that he should go to Judea so he could make a name for himself. Another time, in Mark 3:21, they sought to restrain him for his own benefit. This behavior only makes sense if these “brethren” were older than Jesus, but that eliminates them as his biological brothers, since Jesus was Mary’s “firstborn” son (Luke 2:7).

#4—JESUS WOULD NOT HAVE DISREGARDED FAMILY TIES
Finally, consider what happened at the foot of the cross. When he was dying, Jesus entrusted his mother to the apostle John (John 19). The Gospels mention four of his “brethren”: James, Joseph, Simon, and Jude. It’s hard to imagine why Jesus would have disregarded family ties and asked John to care for his mother after his death if these four men were also her sons.

Fortunately, we’re blessed as Catholics to have mountains of evidence to support the Church’s Marian doctrines. So join us next week for more compelling historical and rational evidence that our Blessed Mother is, indeed, “ever virgin.” (And what Martin Luther believed may surprise you.)

« A Light in the DarknessFasting for Freedom »