It’s the Christmas season: a time of feasting that we anticipate all year.  As much as I want to savor this time, I find myself preoccupied with more penitential thoughts.

Just as God guilted me into praying the rosary, He’s been using His relentless, persistent tactics to convince me of the need for a change in my life.  Rightly is He called the “Hound of Heaven”. After several months of evasion, I finally realize that I can’t run away from Him any longer.  I’m being called to fast.

Fasting is not something I’ve ever been good at.  In fact, I’ve never been able to fast in any meaningful way.  Two smaller meals and one regular meal, offered up a measly two days a year, don’t help me feel especially accomplished in the art.  Outside of Lent, I’ve often considered fasting for a particular intention, only to give up the idea at the sight of a Hershey bar.  The mental conversation goes like this:

Self 2:  “What?  You may never see one of these again!  Eat it.  How is giving up a Hershey bar going to help anyone anyway?”

Self 2:  “Ha–like you’ll stick with it.  Quit kidding yourself.  You just want to lose weight.”

Self 2:  “Aha!  You have selfish motives!  The whole fast is useless. ‘Eat, drink and be merry, for tomorrow we die!’”

And just like that, my fast is over—rationalized away before I begin.

Another complicating factor in my fasts: food is an obsession for me.  More accurately, food is an addiction.  Unlike the alcoholic, I can’t simply abstain; I have to eat to live.  The problem is that I function at the opposite end of the spectrum: I live to eat. 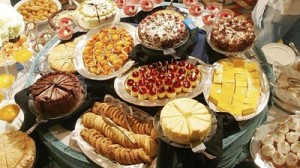 After twenty years as an adult, I stumbled upon the idea that every food is not problematic—only carbohydrates.  Pooh-pooh all you want, but I can personally attest (as can AnnMarie) that when I quit eating carbohydrates, my thoughts about food change.  I no longer nosh all day, sneak food in secret, or eat whole jars of peanut butter with bags of chocolate chips mixed in.  The evil little monkey on my back goes away and leaves me in peace.

Of course, I fall.  I get off track and binge like crazy.  And I hate it.  I hate the gluttonous, out-of-control, shoving-food-down-the-gullet-without-tasting-it maniac that I become.  But most of the time I don’t hate it enough to walk away.  So I spin in the vortex for a while, down and down, until I can manage to break free again.

I have also come to terms with the fact that my son has an addiction, too.  He is addicted to pornography.  It’s a battle he has fought since age twelve.   While he lived at home, we could help filter his life.  Now, as a freshman in college, he swims in a sea of it.  Like me, he has managed to walk away and stay “clean” for a while, but ultimately finds himself drawn in again.  Sex, like food, is everywhere.

I’ve prayed for my son—prayed, cried and prayed again.  But what I haven’t been able to do is fast for him.  Only in the last year have I begun to see a link between my son’s addiction and my own.  I have always looked upon his sin as worse than mine, but how different are we?  Pornography is a twisting of the precious gift of our sexuality.  My food obsession, too, is a twisting of the goods that God has given.  (Dieters can even look at “food porn” online—graphic images of forbidden delicacies, intended to stimulate and tantalize).  Both pornography and food addiction represent a warped, disordered misuse of things that are objectively good—things that God has given us to sustain and enrich life.  My son and I aren’t so different after all.  I can’t help but think: if I could give up my addiction, as a fast for my son, how powerful would that be?

It may sound bizarre, but I feel that God has given me a unique opportunity to help my son, to do him a service that no one else can.  It is as though we share a strange, supernatural bond, and I have recourse to special aid by virtue of our common sin.  If only I (by God’s grace) can manage to break free of my chains, I can help set him free in the process.  It’s like a scene from a science fiction movie—but I know that in the communion of saints, it’s possible.

Moses fasted for the sins of the faithless Israelite people, begging God’s mercy for them (Exodus 34).  So did the prophet Daniel (Daniel 9).  The Israelites fasted for deliverance (1 Samuel 7; Nehemiah 9), as did the people of Nineveh (Jonah 3).  Jesus himself told his apostles that some demons are subdued only “by prayer and fasting” (Mark 9:29).

Pope Paul VI, in the 1966 apostolic constitution Paenitemini (On Fast and Abstinence) wrote:“… mortification aims at the ‘liberation’ of man, who often finds himself, because of concupiscence, almost chained by his own senses. Through ‘corporal fasting’ man regains strength and the ‘wound inflicted on the dignity of our nature by intemperance is cured by the medicine of a salutary abstinence.’”  To put it simply, for those consumed by addiction, fasting is a powerful antidote.

Fr. Rich Simon’s, host of Relevant Radio’s Go Ask Your Father, put the Holy Father’s thoughts into more common language, explaining that in our world we are “enslaved” by many things.  Fasting opposes this slavery.  With fasting, we actively, consciously, choose to forego that which we desire.  Thus we are not mastered by our desires, but willfully master them by saying “no” to self.  Fasting, when coupled with prayer, is a hammer striking at the chains that bind us in sin.  As Fr. Rich says, “Fasting is about freedom”.

Of course all this fasting is still theoretical for me.  I haven’t actually done any fasting.  In fact, as is typical, I have been leery to commit myself to it without a very clear sign from above.  I keep hoping to look down and find this:

But as I was writing, God generously gave me the confirmation I craved.  It turns out that our bishops have issued a Call To Prayer For Life, Marriage, And Religious Liberty.  It is a request for “prayer, penance, and sacrifice for the sake of renewing a culture of life, marriage, and religious liberty in our country.”

I’m no genius, but even I can recognize that my son, a well-formed Catholic young man with much good to offer the world, is a prime target in the spiritual battle that rages in our world.  He has an important role to fulfill in the culture of life—as a husband, father, and community leader—and the sanctity of his vocation is under attack.  The bishops are not asking me to fast for a theoretical soldier in a culture war far, far away.  They are asking me to fast for my son.  They are asking me to strike a blow for the culture of life by working to exorcise pornography from the life of one young man—my young man.  Our culture is renewed not through mighty deeds and acts of Congress, but by me being faithful to my personal call, doing my small acts, changing my own life and family in little ways.  I can’t be Joan of Arc.  But maybe I can be St. Therese.

The bishops call to prayer has five components—including fasting and abstinence from meat on Fridays.  The fast begins on December 30, 2012 (the Feast of the Holy Family) and lasts until November 24, 2013 (the feast of Christ the King).  For a complete outline of the Call to Prayer for Life, Marriage and Religious Liberty, visit the USCCB website.

2 Replies to “Fasting for Freedom”