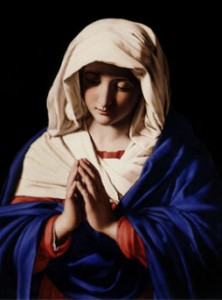 There is a song I hear around this time of year that gives a different perspective of Christmas to those who hear it. Mary, Did You Know? was originally recorded and performed by Michael English, and has been popularized by other artists such as Wynona Judd and Kenny Rogers as a duet and Clay Aiken.

The song speaks to Mary, the Mother of God, asking her if, when she held her baby in her arms, she knew who He really was.

Mary, did you know that your Baby Boy would one day walk on water?

Mary, did you know that your Baby Boy would save our sons and daughters?

The more I hear this song, the more it makes me think about the role of Mary during Advent, and perhaps moreso now that I am a mother myself.

Many mothers say that if they knew all the challenges and heartache that comes with motherhood, they would still do it because the love and joy you feel outweighs all that. When you have a child, you give your whole heart to that child, whether the child is your first, second, fifth, or twelfth (or even twentieth!). Your heart grows larger with each child, and there is an incredible connection between mother and child that can only be fully understood by a mother. There is something about motherhood that transcends all other experiences on this earth. And Mary felt that about the Christ Child just as I do for my precious Wyatt and Lilly.

Mary, did you know that your Baby Boy will give sight to a blind man?

Mary, did you know that your Baby Boy will calm the storm with His hand?

Did you know that your Baby Boy has walked where angels trod?

When you kiss your little Baby you kissed the face of God. 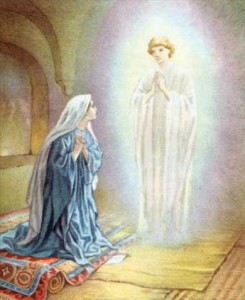 While Gabriel explained to this young woman (well, likely a girl by today’s standards) that her Baby would be the Messiah, I can’t help but think she probably didn’t fully understand. Because, if I’m being honest, even I didn’t understand a lot of what my doctor told me at my prenatal appointments. (Maybe I shouldn’t have admitted that….)

During Advent, Mary was reaching the end of her pregnancy. She was uncomfortable, probably in pain, and going on a long journey with her new husband. She probably knew her Baby would be born while she was away from home, away from the women in her family who would have helped with the delivery, and it was probably scary for her. And I can imagine it was her faith and trust in God that kept her going day after day.

And Mary said, “Behold, the handmaid of the Lord; be it unto me according to thy word.” (Luke 1:38a ASV)

Mary loved God, and was willing immediately to serve Him in any way He asked. So when Gabriel told her she was pregnant and was carrying Christ, she didn’t hesitate when she accepted the honor and responsibility that came with it. She may not have known what was in store for her, but she knew she was doing it for God, and that was enough.

Though pregnancy helps prepare a woman (physically and mentally) for motherhood, everything still changes when you see your baby for the first time. A new baby’s perfect face and tiny body is unlike anything else. The bond between mother and child that begins to form at that moment is for a lifetime, regardless of what happens in either of their lives. Mothers know their children better than anyone except the Lord. 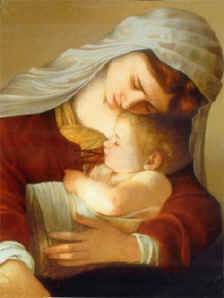 Mary, did you know that your Baby Boy is Lord of all creation?

Mary, did you know that your Baby Boy would one day rule the nations?

Did you know that your Baby Boy is heaven’s perfect Lamb?

The sleeping Child you’re holding is the Great I Am.

It is, in part, because of Mary that I love Christmas as much as I do. Even before I came into full communion with the Church I was drawn to the Blessed Mother. I knew I wanted to be a wife and mother for a long time before it happened, and Mary was an example of Christian motherhood and wifehood that moved me to grow in my faith every day.

As we celebrate Advent in anticipation of Christmas and the celebration of the birth of our Lord, I will spend more time talking to the Blessed Mother, learning more about her. And as I meditate on what she endured during her pregnancy, delivery, and motherhood, I will be strengthened in my own journey as a mother. As I think about the first time she held her Baby, our Lord, I will catch my own son in a hug before he can squirm away and kiss my daughter to make her smile. Because, just as Mary accepted her calling from God as the Mother of God, I welcome my calling as a Catholic wife and mother. And during this Advent and Christmas, especially, I will pray to God and say, Behold, the handmaid of the Lord; be it unto me according to thy word.

[POSTSCRIPT] It was brought to my attention in a comment on this post that the song “Mary, Did You Know?” denies the Immaculate Conception in the line that says, “Did you know that your Baby Boy has come to make you new? / This Child that you delivered will soon deliver you.” It is not my intention to deny the Immaculate Conception at all. I would like to note that the song used in this post is to speak to Mary’s mindset as a new mother, and as the mother of Christ. It is not a Catholic song, so it does not strictly adhere to Catholic teachings. I apologize for any offense that may have come from this, and those lines have been deleted from the post. Thank you, and God bless.