One of the most beautiful scenes that God, through nature, provides us with are sunrises.  At the distant horizon you see before arising a soft and radiant light, the aurora of the sun.  This beautiful and perfect light foreshadows the beauty which is to come; the daily gift of the sunrise.  Each day we are able to witness this perfect birth of the sun.  God, all-knowing and all-powerful at the moment of creation, in His infinite wisdom was aware of all that was to come.  This rising sun and it’s beautiful beginning at dusk is no coincidence and definitely not a thoughtless act or purpose, for we are sensory beings.  As this beautiful light at dusk announces the perfection that is to come, the sun, so too Our Blessed Lady foreshadows the redemption that is to come, God made man.  So as the sun shines through glass without changing it in matter, Mary is the window of heaven, through which the true Light came into the world. 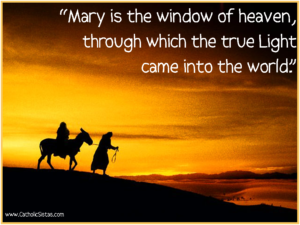 In old times, as well as in places where it still exists today, monarchs are granted special privileges to the cities or towns of their birth or coronation.  In this same way, the King of Heaven gives special privileges and prerogatives to the Mother who bore Him, the Queen-Mother.  Mary is selected by God the Father to be the Mother of His Son; therefore He too is able to create and grant her preservation from the stain of original sin.  No other mere human, angel, or even a saint can say to God, “You are my Son,” but Mary.  He who was the author of her being was born of the blessed woman who is the wonder of wonders and nothing in the entire of creation, God is the only exception, is more glorious than she.  Due to his own infinite sanctity, God suspends, in this instance, the law which His divine justice had passed upon the children of Adam and Eve.

Early on in Genesis 3:15 God proclaims her spotless purity and her sinlessness in paradise, and afterwards in Luke 1:28 by the Archangel Gabriel himself when he refers to her as “full of grace” and “blessed among women.”  Her response to him announces her determination to preserve her virginity, “I am the handmaiden of the Lord, let it be done according to His will.”  God also said, “She shall crush thy head,” to the serpent; had she been conquered by sin like the rest of us, she could not possibly be his conqueror.   The dignity of Christ alone demanded that He be born of a woman free from sin; for she was the first tabernacle of Our Lord.

Saint Thomas Aquinas teaches us that when God raises anyone to a high post (think Peter, Augustine, etc.) He gifts that person for the job at hand.  God gives each of us the graces needed for the vocation we are called for.  Therefore, God exalted Mary above all men and angels and was free from original and actual sin (Trent 6:23)  In Canticles 2:2, she is described as the “lily among thorns,” and in Wisdom 7:26 as “a mirror without flaw.”  God had a plan for her from long ago and in both tradition and scripture this dogma, a sovereign and universal decree, is supported.  Elizabeth is the first to call Mary, the “Mother of God,” and later in the year 431, in the Council of Ephesus the title “Dei Genitrix” is given to her in order to condemn the heresy of Nestorius.  Christ did not however, derive from her His Divine nature and just as any other child who does not receive its soul from its mother, but instead from God.  In Isaiah 7:14, the prophet foretells of a virgin that will conceive and bear a son.  At her conception in the womb of Saint Anne, in child-bearing, and even after the painless birth of Jesus, the Blessed Mother remained a pure virgin.  Just as Our Lord appeared to the Apostles through shut doors, so too he came into the world and her virginity remained intact.  The Blessed Mother herself says in Luke 1:48, “from henceforth all generations shall call me Blessed.” 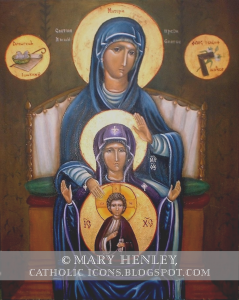 Appropriately at the beginning of our liturgical year and during the Advent season, we honor her with the feast of the Immaculate Conception, the most solemn during this time of preparation.  There was none other that would better harmonize with the spirit of the Church in this mystic season of expectation.  We celebrate this solemnity with joy, for the Immaculate Conception of Mary foreshadows the coming birth of Our Savior.  Some wonder about dogmas of the Church, others criticize them as if they were inventions of men.  Dogmas are believed amongst the faithful throughout the history of the Church; the Immaculate Conception is a fine example of this.  Even though, it was not formally defined until 1854 by Pope Pius IX in Ineffabilis Deus, belief in Mary’s Immaculate Conception stretches back in time to the Early Church fathers.  The Church with her infallible authority, declared, by the lips of Pope Pius IX, that this article of faith had been revealed by God himself.

“He [God], therefore, filled her, far more than all the angelic spirits and all the saints, with an abundance of all heavenly gifts from the treasury of His divinity, in such a wonderful manner that she would always be free from absolutely every stain of sin, and that, all beautiful and perfect, she might display such fullness of innocence and holiness that under God none greater is known, and which, God excepted, no one can attain even in thought.” (Pius IX, Ineffabilis Deus, 12/8/1854) 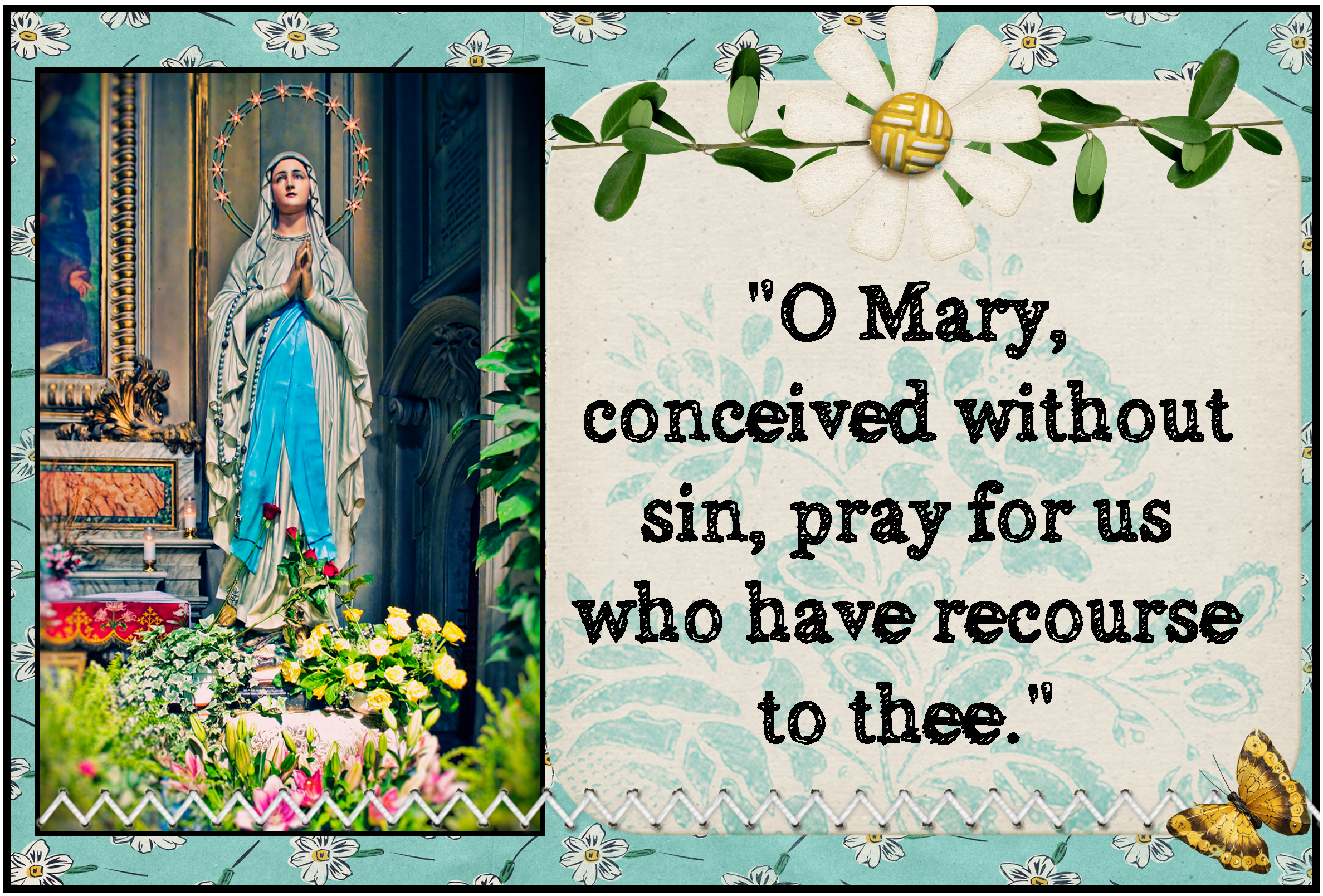 So whomever truly loves God should also honor the Mother of God far above the saints. Catholics honor the Queen-Mother as a reflection upon the King of Heaven and Earth, her Beloved Son, Jesus Christ.  We see this in the lives of the saints; the greater the saint, the greater their love for Mother Mary.  Jesus told us in John 19:27,  that she was actually our mother when he tells Saint John, the beloved, “behold thy mother.”  The disobedience of Eve brought upon the human race the misery of original sin, yet the obedience of Mary, the new Eve, restored it to a state of grace.  Through one woman death entered into the world, through another, eternal life.

Just like any good mother our salvation is of her utmost concern.  So just as a dutiful child delights in the presence of his mother, we as practicing and devout Christians rejoice in addressing Mary in loving supplications as well as her majestic titles of Mother of God, the Immaculate Conception, the first Tabernacle of God.

***In discussing this topic with my friend, Brian Francis Hudon, he surprised me with this beautiful poem (he suggested you listen to this beautiful piece while reading it), entitled The Ark at Dawn:

“Woman, the new Ark, pure and immaculate,
the new Eve, for a redeemer, the dawn of man.
Holy one of Grace, touched by the Paraclete,
the Queen of Heaven, awaiting the end of night.
Thus breaks providence, His long awaited plan,
her Star rising in the East, the breaking of light.
End of the eclipse, Mary, daughter, mother,
a wealth of hope, long dark night of the soul.
Grace awaits, free of every stain, for another,
that He might enter unto the world the same.
Making every woman, thus in grace and whole,
so too that every man might know His name.
Her prayer into the night, obedient and mild,
a child in womb and in turn her womb of grace.
Thus the greeting then known for every child,
waiting, waiting for her greeting and to Rejoice.
We wait and consider, no stranger to her face,
her yes; but not before her temperate choice.
Her hope from God; the darkest of the dark,
always she was known, considered from the fall.
The Tabernacle, the Tent of God, and the Ark,
awaiting the Sword that would pierce her soul.
Hearts now revealed, only waiting on their call
for the fruit of her womb to make them whole.
More than all the storms of the weary world,
her birth tells the time of day and it is the morn.
For she was before time, her colors unfurled,
loved in the heart of God and loved by her Son.
And with the Spirit, by their Love she is born,
beyond the mountains, the stars and rising sun.”

3 Replies to “The Immaculate Conception: Christ’s First Gift to Mary His Mother”