How does the Holy Spirit speak to you?  The third person in the Holy Trinity is often the most present in our day to day lives—with our even realizing it.  When my oldest son was a baby, I worked outside of the home.  I had a wonderful babysitter who also worked for and lived with another family, caring for their children.  My son was nurtured and well attended to in the other family’s home.  It was a good situation.  I had a conversation with the young lady who took care of my precious child.  She told me about her boyfriend whom she was to marry, and she mentioned many wonderful things about this young man, but most notably in retrospect, the fact that he was a recovering drug addict.  I was impressed that she was the kind of person to give this man a chance and she had found happiness.  I didn’t think of it again.  Then I was expecting my second son and she said that she could care for him too when I was off maternity leave.  I visited the new home she shared with her now husband.  It was clean and safe on the surface, but something nagged at me.  I could not put my finger on it.  Right then, during my visit, her husband came home.  He was warm and friendly and clearly was in love with his young wife— part of an idyllic family setting.  Then it hit me!  I just knew I couldn’t leave my children here.  I just COULDN’T!  The drug thing leaped back into my mind that instant.  I came home and told my husband that we were not going to take the babies there while I worked.  He agreed, but was concerned… who would take care of them then?  I told him I had to believe that God would provide another option, but this was not who I would have care for my babies.  Fortunately, a few days later my mother-in-law offered to take care of them.  Now, I may never know if I was wrong, but I certainly did not want to know I was right. 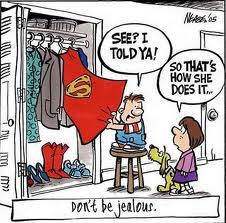 Some describe these nagging feelings as “mommy instinct.”  It makes sense, but what makes better sense to me– since as humans I don’t think we have “instincts” — was that the Holy Spirit was speaking to me, warning me of what would be harmful for my children.  We have all heard the stories of mothers’ lifting cars off their children, running at unimaginable speeds to an injured child – supernatural abilities kicking in.  I believe in giving credit where credit is due.  The Holy Spirit enables us to do amazing things and to know the unknowable.  How often have we heard stories too of: “I had a feeling.  I should have listened to my gut”?  The sense of regret that comes with these stories is often difficult to bear.  I know I have to listen to the Holy Spirit even more carefully as my children get older.  Is this friend right for my child?  Do I allow him to attend this activity or participate in that event?  Am I overprotective?  Probably.  Could I be seen as irrational? Maybe.  But I have to know that my husband and I, as parents, are not in this alone.  God has to be there with us every step of the way.  We have to want Him there at all times.  We recently had to tell my son that we did not want him to hang out with a certain friend of his.  After much prayer, and prayer is necessary before making judgments, we had a nagging feeling that this kid’s “emo” appearance was not all about a fad, but it was the type of lifestyle this kid was involved in.  Unfortunately, this was confirmed. We cannot congratulate ourselves for being “right”.  I am saddened that my son was disillusioned by someone and that he was disappointed by this.  This is by far not the last time I will turn to the Holy Spirit for guidance in keeping my kids safe and holy.  Oftentimes, what God has to say to us is not popular, nor is it easy to bear, but I have to thank the Holy Spirit for giving me the hand that I always need in raising my children.

One Reply to “How Does the Holy Spirit Speak to You?”