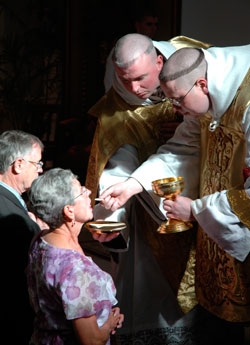 Fr. Thomas Loya writes in the August 2013 issue of “Theosis,”
My hope and advice for married couples and for those preparing for marriage is that they will ultimately become great monks…Monasticism is a mindfulness that we belong ultimately to God and we cannot love humanely unless we love God first and above all. This is the secret to a happy marriage–to live first as “virginal spouses” and then as spouses married to each other. This profound reality is simply and beautifully summed up in the Song of Songs 4:8, 12, “You have ravished my heart, my sister, my bride.” Even married couples are first and always brother and sister in the Lord, even before they are spouse.

The evangelical counsels, in case you don’t know, are the vows taken by monks, nuns, and consecrated religious to lives of poverty, chastity, and obedience. Some orders add a fourth vow, such as “obedience to the Pope” or “stability,” etc. As I ponder this quote by Fr. Loya, I consider that these three commitments, when avidly practiced by both parties of a marriage as great monks do, will inevitably guide spouses in the right direction: that of eternal life, the ultimate goal of sacramental matrimony.

The Counsel of Poverty

Jesus enjoins his disciples to prefer him to everything and everyone, and bids them ‘renounce all that [they have]’ for his sake and that of the Gospel. Shortly before his passion he gave them the example of the poor widow of Jerusalem who, out of her poverty, gave all that she had to live on. The precept of detachment from riches is obligatory for entrance into the Kingdom of heaven.

Catechism of the Catholic Church (CCC) paragraph 2544, emphasis mine

If we are to love one another well and love Jesus above all, detachment from riches and material pleasures matters a great deal. If we are using all our time and attention to collect material goods, or placing materials in front of our eyes such as cell phones and TV screens when we could be engaged in more worthwhile pursuits, our marriage and faith will suffer. Our souls will suffer. Isn’t the homily about the rich young man always something along the lines of, “It’s not BAD to be rich, it’s what you do with it”? Am I the only one who wonders whether that’s just letting us all off the hook too easy?

The Counsel of Chastity

The chaste person maintains the integrity of the powers of life and love placed in him…Chastity includes an apprenticeship in self-mastery which is a training in human freedom. The alternative is clear: either man governs his passions and finds peace, or he lets himself be dominated by them and becomes unhappy. “Man’s dignity therefore requires him to act out of conscious and free choice, as moved and drawn in a personal way from within, and not by blind impulses in himself or by mere external constraint. Man gains such dignity when, ridding himself of all slavery to the passions, he presses forward to his goal by freely choosing what is good and, by his diligence and skill, effectively secures for himself the means suited to this end.”

The Catholic Church, in case you haven’t noticed, teaches that how we have sex as married people matters. Are we objectifying the other and using them solely for pleasure? Are we preventing the transmission of human life? Are we lusting and using? Are we engaging in pornography and characterizing our marital bed with films or acts that are depraved and objectify the human person? Are we mast*rb*ting (sorry, trying not to attract too many of the wrong search engine hits) in our spare time and using our spouse (or someone who isn’t our spouse) as an object of mental and physical stimulus? etc. Frankly, chastity isn’t solely about sex; it is about everything that we desire. Eating may become a serious pastime for married people; it is an enjoyable, engaging way to spend time together. But chastity teaches that we must not be slaves to our passions, and I would include food in that equation. Fasting and abstaining as a married couple and family for periods of time is important if we wish to grow in that self-restraint. Food, sex, all of it. Take breaks. Pray more.

The Counsel of Obedience

The evangelical counsel of obedience, undertaken in a spirit of faith and love in the following of Christ who was obedient even unto death requires a submission of the will to legitimate superiors, who stand in the place of God when they command according to the proper constitutions.

In the case of marriage, this Counsel works somewhat differently than in religious community, where its members have a superior to whom they give obedience as though to God Himself. They trust that God will work through and speak through their superior. In a marriage, a husband and wife are not in community with a superior other than our Lord and His Bride the Church Herself, and St. Paul’s exhortation, “Submit to one another out of reverence for Christ. Wives, submit yourselves to your own husbands as you do to the Lord…Husbands, love your wives, just as Christ loved the church and gave himself up for her…” (Ephesians 5:21-25, NIV)

The point is, how often are we seeking to have our own way rather than submitting our own will and humbly permitting our spouse to have that portion? Frankly, it’s not usually about big things. Sometimes, it’s the smallest things that can be so hard for us to submit to. As a good example in my own life, I used to take it very personally whenever I’d load the dishwasher and my husband would come in behind me and “fix” everything. I’d get very angry every time and take it very personally, like he was making a big statement about how I do things. Eventually, I realized that this was something important to him; he cares about how it gets done. I really don’t, as long as the dishes manage to get mostly clean. Nor do I possess his excellent spatial awareness. The guy can fit it all. This was a small thing that God was asking me to submit to, so I try now to ask for his involvement because of his meticulous concern for such things, and to try to do it more like how he likes it. I know this sounds goofy but this sort of thing can ruin your marriage if you let it.

Thanks for reading all these thoughts on the subject. I certainly can’t claim to be an expert or particularly holier than the next person, but when things seem to be suffering in my marriage, I’m going to take a look at these evangelical counsels and make sure I’m living my marriage like a great monk.

Note: Portions of this piece originally appeared on The Devout Life blog.

2 Replies to ““My hope and advice for married couples: Become great monks.””