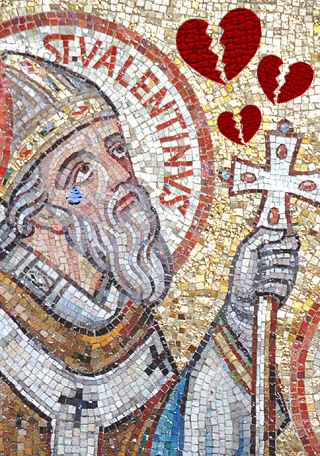 What connection could possibly exist among a bawdy Roman fertility festival, the deaths of holy saints, a sentimental holiday, and the birthday of a modern child? Plenty. 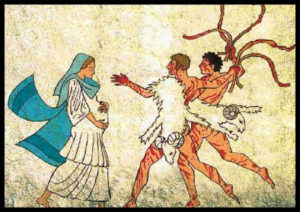 Lupercalia was celebrated in mid-February from prior to Julius Caesar (It is mentioned in Shakespeare’s historical play of the same name.) to its outlawing, attributed to Pope Gelasius in the fifth century. The ceremony involved naked young men sacrificing goats, and then running a course while waving around the goat skins. Women lined the path’s edges, presenting themselves to be smacked by the skins, hoping for good luck in childbirth, or to be purged from the bad luck of infertility. Afterward, spectators and participants lounged about the cave where Romulus and Remus were rumored to have been nursed by a she-wolf (Lupus), flirting, eating, and hopefully getting those long-for babies coming. In AD 278, during Lupercalia, a priest was beheaded by Claudius the Cruel. 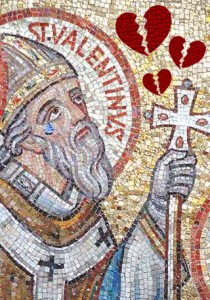 The Saints Valentine were actually several martyred priests of the Roman Empire, of whom are told legendary stories of daring, rebellion, and romance: performing secret weddings, aiding prison excapes, and penning notes from behind bars on heart-shaped leaves, signed, “from your Valentine.” At least one of them was killed on February 14 and it was his feast day that replaced Lupercalia per Pope Gelasius’ decree. The good saints were venerated as part of the liturgical rhythm for eight hundred years. Then a poet gave voice to his feelings on art and love.

Chaucer’s 14th century poem, The Parliament of the Fowls, contains this couplet, “For this was on Saint Valentine’s Day, when every bird cometh there to choose his mate,” for the first time connecting the name of the loving saints with mating birds. From this, our current celebration of love pursued and proclaimed hails. Many special friendships commenced with cards (to the tune of 190 million a year) and dinners; many relationships deepened with diamonds and proposals; many marriages made and anniversaries honored on this day.

Last year’s Valentine’s Day, this married couple, grateful to God for healthy fertility (without bloody goat skins, thankfully), welcomed a new soul to the world, appreciating the prayers of the Valentine saints. Our adorable Adah Marie is one year old today, shamelessly dressed in hearts and flowers! Like women 3000 years ago, I rejoice in the blessing of a child with much jubilation. And introspection. 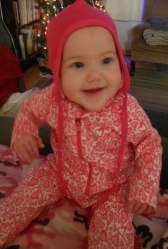 Even in pagan Rome before the life of Jesus was known, people desired love and children, meaning and ceremony, fun and entertainment, beauty and alleviation of suffering.  These universal desires of the human heart from time immemorial find rest and fulfillment in the Son of God. This is the connection among Lupercalia, martyrs, sentiments, and babies ~TRUE LOVE.  Jesus changed everything.

For God so loved the world that He gave His Only Begotten Son, that whosoever believeth in Him should not perish but have everlasting life.  (John 3:16)

Grow old along with me; the best is yet to be.  (Robert Browning)

Eighty-six years I have served Him and He has done me no wrong. How can I blaspheme my King and Savior?  (Polycarp, moments before his execution)