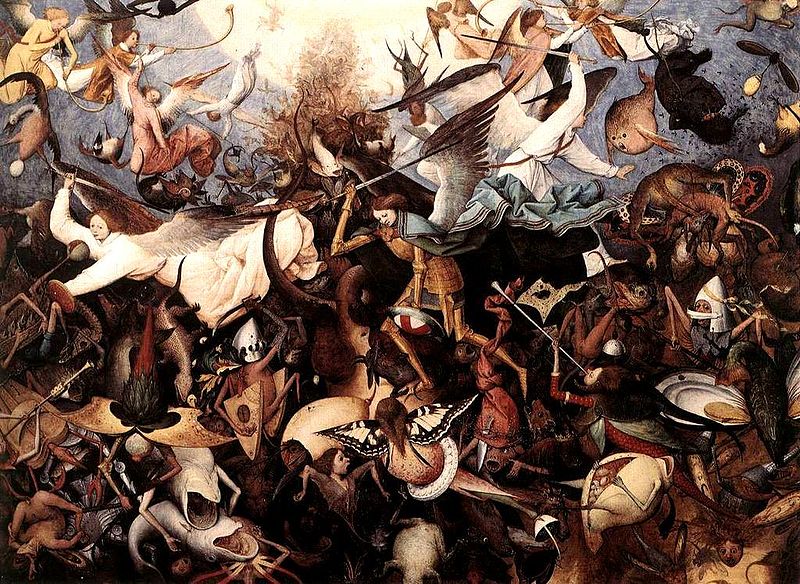 I must admit that I cannot do any better a job explaining what grace is than what the Catechism of the Catholic Church says on it, nor the simpler Baltimore Catechism.  So please consult these links for explanations from  genuine writers and theologians.  However, often we learn better first from a friend in common speech than a formally written text.  So, here we go, my friend.

To understand grace, first we must understand who we are.  We, humans, are souls first and foremost.  We are souls tethered in time and space by our earthly bodies.  Similarly, angels (God’s creations before us humans), are souls as well, but in contrast, they do not have bodies and thus are not bound in time nor space, similar in that way to God.

The angels were all created in a state of grace, and were living in harmony with God in Heaven, until a third of them, lead by the angel of light Lucifer (also known as Satan), chose against God and were cast into Hell.  The fallen angels, being creations of a higher order than humans, were damned immediately for all eternity.  It is these fallen angels who are the masters of evil.

The souls of our first parents, Adam and Eve, were created with sanctifying grace, a share of God’s life, dwelling inside.  Their souls were alive in God.  Like the angels, they too had a perfect union with Him.  They were created in a state of Original Justification.  However, they were beguiled by the Serpent (a disguise of the fallen angel Satan), and chose of their own free will to disobey God’s one rule for them.  They ate the fruit of the Tree of Knowledge knowing full well that God had warned them they would die if they did so.  When God punished Adam and Eve afterward, their bodies did not die but it was their souls that died.  They lost the grace in their souls they had been created with.  They no longer had God dwelling in their souls.  They were now separated from Him.

Without grace in our souls, without God dwelling in our souls, we cannot enter the Kingdom of Heaven.  The gates of Heaven had been closed after the fall of Adam and Eve.  However!  God took pity on us lowly humans, and instead of casting us to hell immediately, He promised us a Savior – someone to restore our souls with God.  When Christ defeated death on His Cross, when He died for our sins and Resurrected, He reopened the gates of Heaven.  He made Heaven attainable.  It is Christ that brings us the grace our souls need in order to be restored and in order to enter Heaven.

We first receive sanctifying grace in our Baptism, which is also known as regeneration.  This is why Baptism is so very, very important to all humans.  God uses an element of His creation, water, as a vehicle to apply Christ’s saving grace that our souls need to be “reborn”; to become alive again in God and to be eligible for Heaven.

Moreover, we receive grace through the Eucharist.  When we partake of the Eucharist, we are partaking of Jesus’s body, blood, soul and divinity.  While God uses water in Baptism to apply Christ’s grace to our souls, it is through His creations of bread and wine that God continues to feed our souls more of Christ’s grace during our earthly lives.

When we choose to sin, whether it is mortal or venial, we adversely affect the grace in our souls.  In a venial sin, we remain in a state of grace, but our souls are just a bit ill or injured.  In a mortal sin (a sin of grave matter done in full knowledge and with full consent, like Adam’s and Eve’s) the grace in our souls is actually lost – the way the angels, and Adam and Eve lost their grace.

However, when we approach Christ in the Sacrament of Confession with genuine and contrite sorrow, another one of God’s creations, a human, specifically a priest, is used to restore grace in our souls, whether we’re in a state of mortal or venial sin.  It is a wonder God is so patient and forgiving toward us humans, but let us be thankful He is!

In a closely related side note, I would like to briefly mention what the Immaculate Conception of Mary means in this context.  Jesus, as the second Adam, and being God made man, of course came to this earth in a perfect state of grace (not having been created, but simply made incarnate).  Also, the Blessed Virgin Mary, the second Eve, was given the privilege of being created in the same state as her predecessor, Eve.  Her Immaculate Conception means she was created with God’s grace already dwelling within her soul, in view of the merits of her Son, Jesus.

The topics of Justification and Sanctification are natural follow ups to this discussion of grace, but we’ll stop here today.  I hope perhaps this explanation has helped some readers of Catholic Sistas understand these topics, as it’s not always easy to understand!  I leave you with some Church Father quotes, as they are better and holier writers than I’ll ever be.

In his First Apology talks about persons seeking to become Christians and quotes Scripture:

Then they are brought by us where there is water, and are regenerated in the same manner in which we were ourselves regenerated. For, in the name of God, the Father and Lord of the universe, and of our Saviour Jesus Christ, and of the Holy Spirit, they then receive the washing with water. For Christ also said, “Unless you be born again, you shall not enter into the kingdom of heaven.” John 3:5 Now, that it is impossible for those who have once been born to enter into their mothers’ wombs, is manifest to all. And how those who have sinned and repent shall escape their sins, is declared by Esaias the prophet, as I wrote above; he thus speaks: “Wash you, make you clean; put away the evil of your doings from your souls; learn to do well; judge the fatherless, and plead for the widow: and come and let us reason together, says the Lord. And though your sins be as scarlet, I will make them white like wool; and though they be as crimson, I will make them white as snow. But if you refuse and rebel, the sword shall devour you: for the mouth of the Lord has spoken it.” Isaiah 1:16-20

In The Merits and the Forgiveness of Sins, and the Baptism of Infants he explains the necessity of Baptism and the Eucharist and quotes Scripture:

The Christians of Carthage have an excellent name for the sacraments, when they say that baptism is nothing else than “salvation,” and the sacrament of the body of Christ nothing else than “life.” Whence, however, was this derived, but from that primitive, as I suppose, and apostolic tradition, by which the Churches of Christ maintain it to be an inherent principle, that without baptism and partaking of the supper of the Lord it is impossible for any man to attain either to the kingdom of God or to salvation and everlasting life? So much also does Scripture testify, according to the words which we already quoted. For wherein does their opinion, who designate baptism by the term salvation, differ from what is written: “He saved us by the washing of regeneration?” Titus 3:5 or from Peter’s statement: “The like figure whereunto even baptism does also now save us?” 1 Peter 3:21 And what else do they say who call the sacrament of the Lord’s Supper life, than that which is written: “I am the living bread which came down from heaven;” John 6:51 and “The bread that I shall give is my flesh, for the life of the world;” John 6:51 and “Except you eat the flesh of the Son of man, and drink His blood, you shall have no life in you?” John 6:53 If, therefore, as so many and such divine witnesses agree, neither salvation nor eternal life can be hoped for by any man without baptism and the Lord’s body and blood, it is vain to promise these blessings to infants without them.

In The Priesthood he speaks of how priests make possible the sacraments of Baptism, Eucharist and Confession for our Salvation, and quotes Scripture:

For if any one will consider how great a thing it is for one, being a man, and compassed with flesh and blood, to be enabled to draw near to that blessed and pure nature, he will then clearly see what great honor the grace of the Spirit has vouchsafed to priests; since by their agency these rites are celebrated, and others nowise inferior to these both in respect of our dignity and our salvation. For they who inhabit the earth and make their abode there are entrusted with the administration of things which are in Heaven, and have received an authority which God has not given to angels or archangels. For it has not been said to them, “Whatsoever you shall bind on earth shall be bound in Heaven, and whatsoever you shall loose on earth shall be loosed in Heaven.” Matthew 18:18 They who rule on earth have indeed authority to bind, but only the body: whereas this binding lays hold of the soul and penetrates the heavens; and what priests do here below God ratifies above, and the Master confirms the sentence of his servants. For indeed what is it but all manner of heavenly authority which He has given them when He says, “Whose sins ye remit they are remitted, and whose sins ye retain they are retained?” John 20:23 What authority could be greater than this? “The Father has committed all judgment to the Son?” John 5:22 But I see it all put into the hands of these men by the Son. For they have been conducted to this dignity as if they were already translated to Heaven, and had transcended human nature, and were released from the passions to which we are liable. … For if no one can enter into the kingdom of Heaven except he be regenerate through water and the Spirit, and he who does not eat the flesh of the Lord and drink His blood is excluded from eternal life, and if all these things are accomplished only by means of those holy hands, I mean the hands of the priest, how will any one, without these, be able to escape the fire of hell, or to win those crowns which are reserved for the victorious?