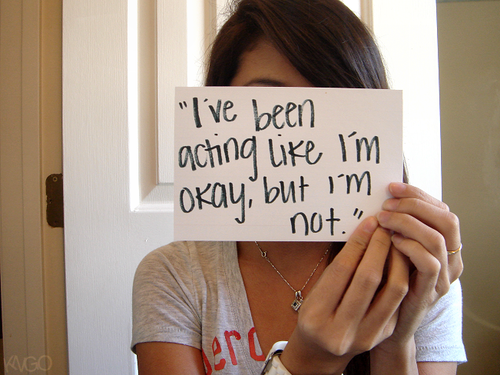 More than any other phrase I plaintively text or whimper over a phone line in four a.m. moments of weakness, I catch myself voicing one desire:

“I just want everything to be okay.”

This morning, as I swore at the rain and the cosmos and the inept metropolitan drivers on University Boulevard using language that would make the kid in the Exorcist blush, I found myself questioning for the first time in my life — what is this elusive “okay” which so haunts my waking moments?

Furthermore — and this, I think, is more fundamental — who died and appointed me the Fixer of All Things Not-Okay in the universe, anyway?  Most of the pain and unhappiness in my own life — and I would go so far as to say most of the pain and unhappiness in other people’s lives as well — is directly attributable to a pathological inability to tolerate the Not-Okay.  We fail to recognize this simple truth: that implicit in the act of living is the possibility of screwing it up.  We sell out on the deepest convictions of our hearts to placate other people; we avoid suffering at all costs, choosing instead to submerge our pain in sex or alcohol or food or video games or socializing or stamp-collecting; we quietly bury our chancier dreams to make room for a life of comfort and ease and predictability; we make decisions we wouldn’t otherwise have made in the name of keeping the peace; we fear failure and so refuse to hazard anything at all. And so it goes, in a “dirty little self-repeating cycle,” as Chesterton once defined madness. So things stay clean and unrumpled and Okay, like a French-cuffed shirt with the life starched out of it — but at what cost?
When will we cut through all our carefully-constructed protective layers and admit that sometimes things aren’t okay? Sometimes they’re sticky and messy and imperfect and don’t look anything like they do in the movies. Sometimes things are complicated and circuitous, and sometimes it’s because we messed up, and sometimes it’s because somebody else messed up, but regardless, the invariable result is one big gnarly knot of Not-Okay that even a Boy Scout couldn’t unravel. Yet we go so far in our desperate, frantic attempts to unravel and fix and repair and control and understand and disambiguate and Make Okay that we miss the whole damn point, which is this: once we preclude the Not-Okay, we have effectively precluded life itself.

We need to accept the imperfect, embrace it, maybe even bask in it. Yeah, things are Okay at “once upon a time” and they will be Okay again at “happily ever after,” but that’s beside the point; the story is what happens between the Okay. As Nigerian magical-realist writer Ben Okri once noted, “The fact of storytelling hints at a fundamental human unease, hints at human imperfection. Where there is perfection, there is no story to tell.” You show me a story without a good central conflict and I will show you a blow-your-brains-out dull read (Waiting for Godot comes to mind). Life is not all — or even mostly — sunshine and lollipops and our most fervid attempts to render it such will only result in something dull and vapid and artificial.

Too often, we view pain and suffering and mess like the early Victorians viewed pregnancy: an unpleasant yet necessary evil, meant to be slogged through but certainly not spoken of.  Instead, consider this: what if this is the good stuff? What if these are the defining moments that, to borrow a phrase from Oscar Wilde, make or unmake character? What if we’re all just a hot mess at the end of the day, and some of us are just better at concealing it than others? What if it’s our very hot-messiness and confusion and weakness and ineptitude that makes us lovable?

At the end of the day, maybe God is in the Not-Okay. Maybe He isn’t to be found in cookie-cutter lives in sterile rooms behind white picket fences, but in the squidgy details, at the blurred edges of our lives that make us squint.
Maybe the only position in which we can encounter the divine is with our backs against the wall.
Maybe it is only when we are blinded by tears that we can really see clearly at all.

::Donna Shute is a 26-year-old writer, director, and actress from Silver Spring, Maryland, who received her B.A. in English Language and Literature from Christendom College in 2006 and her M.A. in English and drama from the Catholic University of America in 2010. She has a passion for theater, literature, film criticism, psychopathology, and all things caffeinated.::

One Reply to “God Is in The Not-Okay”