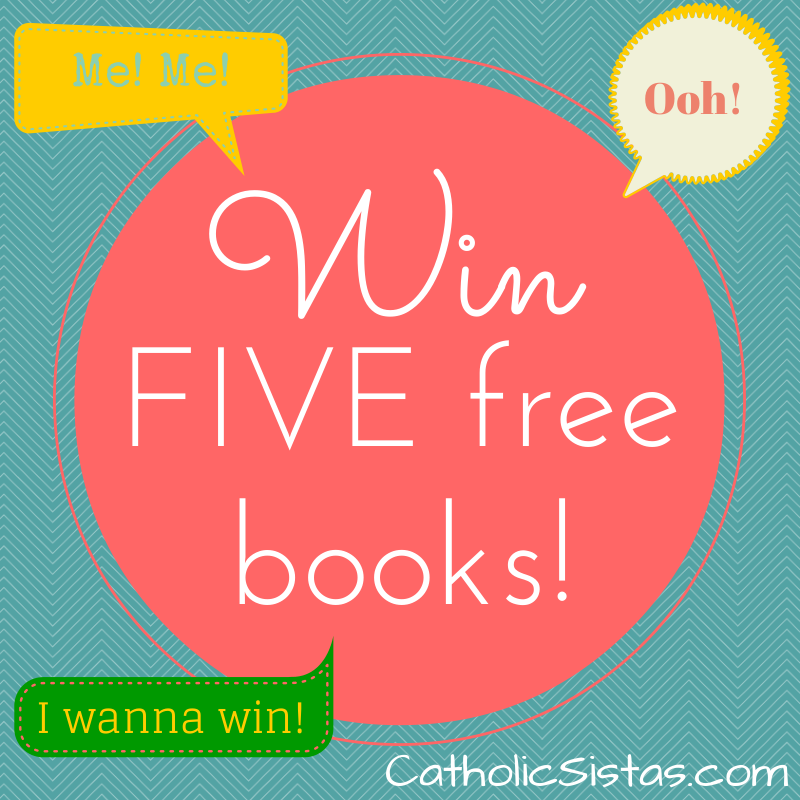 There’s nothing I like better than Fridays and giveaways – two of my favorite things! And, it’s been a while since we’ve hosted a giveaway! We have been blessed to call Catholic author Ellen Gable friend of the Sistas! It is an honor to be able to offer ONE lucky winner all FIVE of her books in print!!

::only open to readers in the US and Canada::

The contest will go until midnight, May 31th, so get started!!

A gripping story of one young woman’s physical, emotional, spiritual journey from high school to adulthood. Interspersed throughout the story are flashbacks to Emily’s great-grandmother’s troubled life, with a climax culminating in the surprising revelation that Emily and her great-grandmother are connected more deeply than by ancestral ties alone. Based on a true story.

Caroline Martin’s life has finally taken a turn for the better. After years of hard work, she has met a virtuous and wealthy man whose love seems to promise the kind of life realized only within the comforting novels she keeps on her night table. Tragedy, however, will teach Caroline of the complexity with which God Himself authors the lives of those who turn towards Him. Gold Medal Winner in Religious Fiction, 2010 IPPY Awards.

In this sequel to “In Name Only” (2009, FQP), “A Subtle Grace” continues the story of the wealthy and unconventional O’Donovan Family as they approach the dawn of a new century.

At 19, Kathleen (oldest daughter) is unmarried with no prospects. Fearing the lonely fate of an old maid, her impatience leads to an infatuation with the first man who shows interest. The suave, handsome son of the local police chief seems a perfect match. But will her impulsive manner prevent her from recognizing her true beloved? A disturbing turn of events brings a dark shadow that threatens the life-long happiness she desires.

Dr. Luke Peterson (the family’s new physician) also makes quite an impression on Kathleen. His affection for her leads him to startling revelations: about Kathleen, about his practice and, most importantly, about himself.

Will (oldest son) believes God may be calling him to a religious vocation. Eventually, he discovers the hidden circumstances of his humble beginnings compelling him to embark on a pilgrimage to Rome.

(Note: Although A Subtle Grace is a sequel, it can be read as a stand alone book, independently of the first book in the series.)

After three heartbreaking miscarriages, Tom and Jenny Callahan are happily anticipating the birth of their sixth child. A neighbor, however, is secretly hatching a sinister plot which will find Jenny and her unborn baby fighting for their lives.

A celebration of faith and enduring love. This compilation contains 12 courtship/dating stories which will inspire, captivate and entertain readers. Some of the stories include: a widow with eight children meets a widower with six children; a man asks his live-in girlfriend “what if we stopped having sex,” and is greeted with tears of joy; an atheist falls in love with her Catholic Prince Charming; a woman prays to God for a husband and years later finds herself falling in love with a seminarian; a sailor prays a novena to marry the right girl. What these and all the stories illustrate is that God is the ideal matchmaker.