And I’m always looking out for some good new series to read. So I got on my Kindle and downloaded a free sample of Martin’s Game of Thrones. This is the best-selling series that HBO has now even made into TV shows.

Much to my dismay, just a few chapters in, Martin starts using the ugliest profanity to describe vicious and brutal sexual acts. If this is the way he begins the story, I knew that the rest would get even worse. I stopped reading, deleted the sample from my device, and went online to check out the reviews. Sure enough, they describe just how much worse he gets. I won’t go into any details, but it’s disturbing stuff. Stuff people shouldn’t read. Because it is bad for them. Garbage. 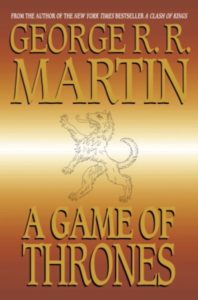 This isn’t the first series to try to go this route. The first fantasy series that I ever stopped reading, mid-book, was Terry Goodkind’s Wizards First Rule. It starts with some semi-promising characters and story ideas before devolving into sadistic sexual acts. No thanks.

I guess this is how authors think they’re being “modern” and “real” and “edgy.” But in fact they are just producing works that will leave violent and deforming images in the minds of readers. Instead of creating a world where the true, good, and beautiful can be found, as Tolkien and Lewis so masterly did, in their worlds there is nothing truly good or beautiful.

But there’s a upside to this situation, too. Because of all the base fantasy novels out there, many fans of the genre are starving for something worthy to read. And that need can be filled most powerfully by Catholic and other Christian authors, because our beliefs are true. And people want to read stories that reveal the deep truth in humanity and in existence itself. Catholic authors have largely ceded this field to secular writers, but it need not be so.

I add my voice to the many others that have been calling for a renaissance in fiction-written-by-Christians. Let’s write the next Lord of the Rings and Narnia series. Let’s learn how to tell stories that enrich people’s lives by showing to them the truth of who they are. The world is longing for it. Will we answer the call?