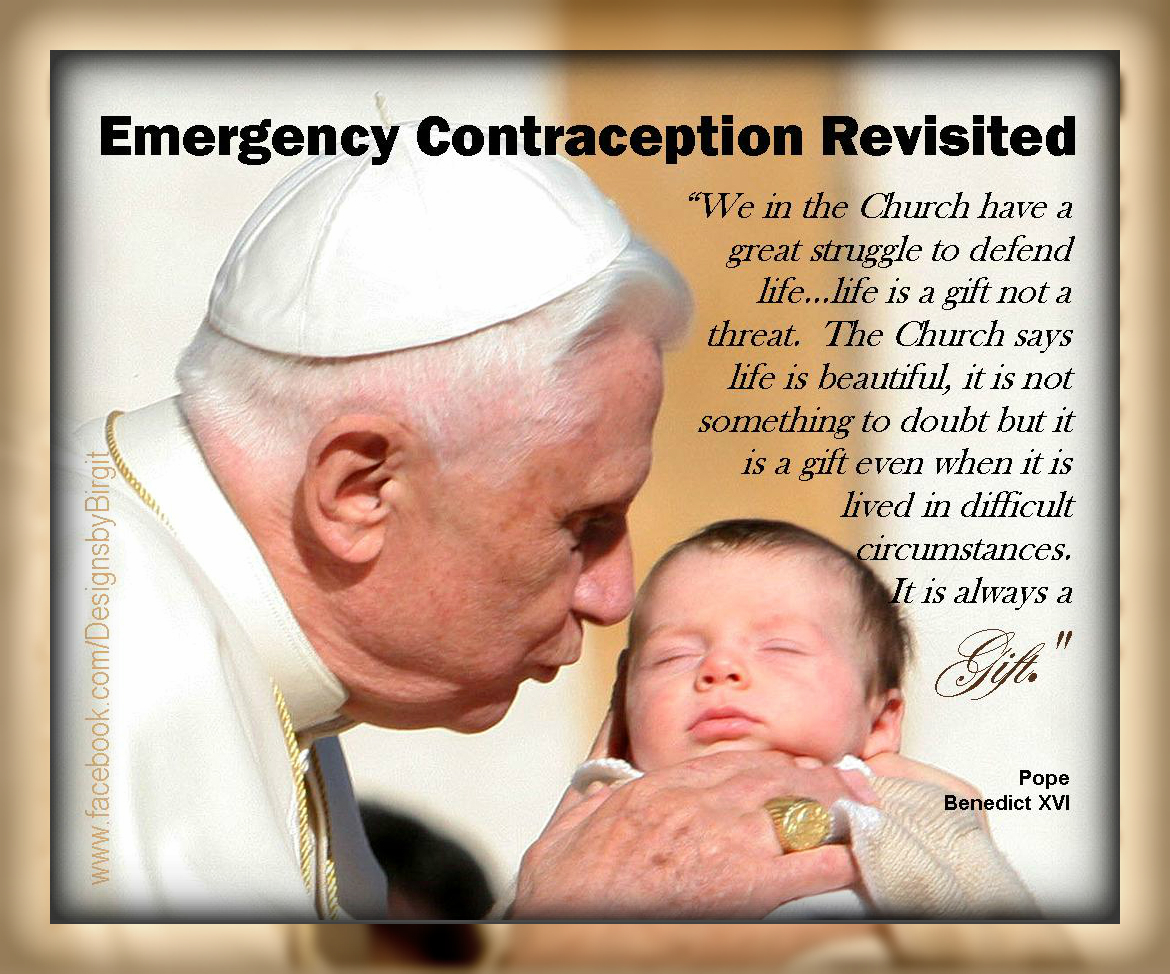 Several questions in the comment box and further research has prompted me to revisit my post, Emergency Contraception: Science and Morals. Although my conclusions remain unwaveringly against EC (emergency contraception), a slightly more in-depth explanation seems necessary. In an effort to remain concise, yet still delve a little deeper, I’m going to address the issues in the format of Q and A.

What did the German bishops actually say?

I downloaded a .pdf file of the German Bishops’ statement and consequently translated it using Google Translate. I was immediately struck by the fact that the statement was not primarily about EC. Instead, the statement included 13 topics, EC was the 8th topic in the list and only garnered two paragraphs. That means a mountain has been made of a mole-hill. In addition, thorough researching has revealed that the statement the bishops made is, in reality, not new, but a re-affirmation of the Universal Church’s stance. The meat of the matter is EC may be used “insofar as it has a contraceptive and not an abortifacient effect. Medical and pharmaceutical methods that cause the death of an embryo may will not continue to be applied.” The German bishops did not specify the conditions beyond that. Therefore, there isn’t much for me to analyze there.

What about the National Catholic Bioethics Center?

In the comments, I was referred to an article of the National Catholic Bioethics Center’s Father Tadeusz Pacholczyk, Ph.D from November 2008. Four considerations are listed there for licit use of EC:

Is the victim pregnant? 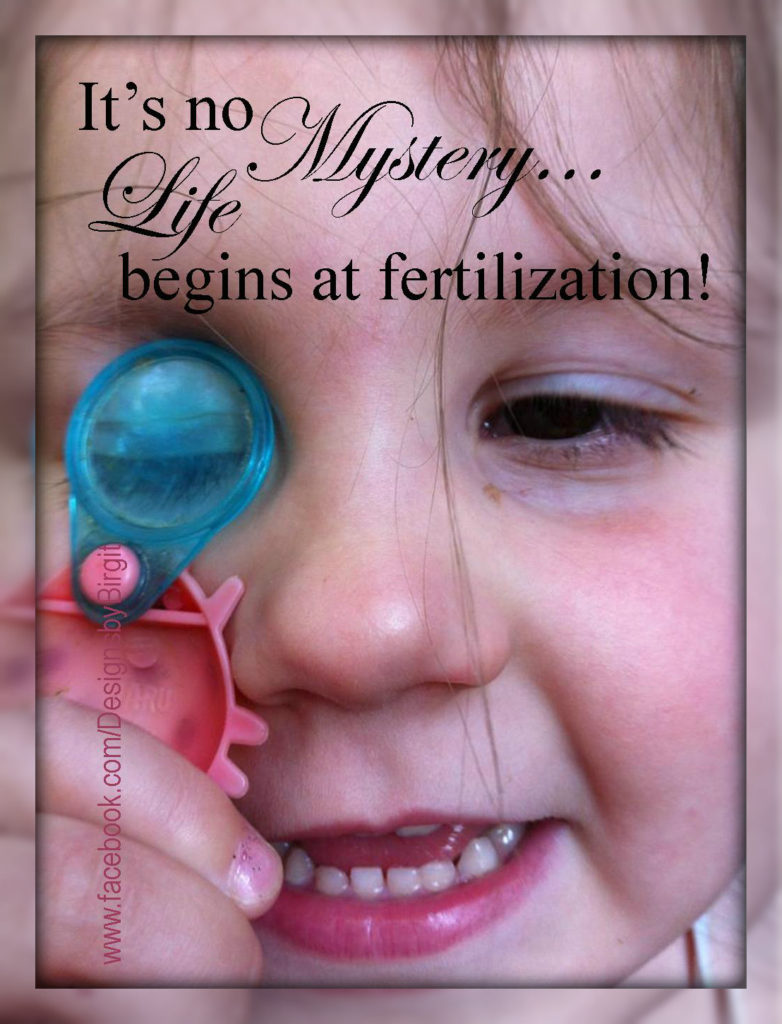 In order to ascertain #1, a pregnancy test and in-depth history from the woman should suffice. Seems simple enough, right? However, as one of my commenter’s asked, what if she’s only days pregnant at the time of the rape and subsequent hospital arrival? This, as well as item #3, are my primary concerns with any EC use, ever. It is here that I lament that all women are not taught to track their own cycles. Ignorance of the female body and cycle is to blame for many an exploitation of women through “convenience” medications such as birth control and EC. As I mentioned in my previous post, there is a test that detects fertilization, not implantation as most pregnancy tests do. However, it is rarely, if ever used. Perhaps in cases of rape, its use would be beneficial.

Is the victim pre-ovulatory, ovulating, or post-ovulatory?

If the woman is not currently pregnant based testing and history, determining her present ovulatory state is absolutely vital for licit use of EC. Therein lies the rub. Determining her present ovulatory state is far from simple. Even women who religiously (pardon the pun) chart their ovulation cycles, make mistakes. Mistaken identification of ovulation or lack thereof is even possible by women who use ovulation predictor kits for the recommended week. If the tests used as per directions can be wrong, wouldn’t the same be true, only with a far greater likelihood, of a single test for that same chemical? Additionally, studies have shown that stress can delay ovulation. So again, is delaying ovulation with a drug with an uncertain mechanism  really be necessary?

Will EC act only to prevent ovulation?

This leads to requirement #4 in Fr. Tad’s article. If items #1 and #3 cannot be reliably ascertained, can anyone reasonably expect EC to only prevent ovulation and not interfere with the embryo that has yet to implant? Unequivocally NO! Apparently, the main drug in the EC called Plan B is basically a twin-sister-drug to RU-486. That in and of itself, should render any other argument null and void. In addition, even the prescribers information enclosed with EC and Planned Parenthood’s research arm, the Guttenmacher Institute doesn’t guarantee that the use of the drug will only prevent ovulation or prevent conception. How can anyone claim to know more than the creators of the drug or proponents of all things abortive and contraceptive? However, I’ve left out requirement #2, believe it or not, the most contentious of all the requirements in my experience.

As a forensic biologist for almost 10 years, I dealt with hundreds of rape cases. It may be impolitic to say, but some of those cases were not truly rapes. Before anyone hastily decides I have no sympathy or respect for rape victims, let me explain. In rape investigations, the police interrogate suspects and ask the victim for her recollections. In addition, rape victims that undergo a sexual assault examination in a hospital are also asked to specifically recount the incident. Sometimes in the midst of recounting the event, the victim concedes that rape did not occur, for various reasons. However, this often happens long after a dose of EC would be given to the victim. Also, many rape victims don’t report to the hospital for their examination or even to the police to file charges until after the 72 hour window of effective use for EC. Some victims have consensual intercourse with their partner prior to the rape or reporting the rape, further muddying the waters. In other words, a rape victim who presents to the hospital may or may not truly be a rape victim. Additionally, if Catholic hospitals allow the use of EC for rape victims, but not other women, more women may report to the hospital as “rape victims” just to get EC. This will inevitably and negatively effect the processing of true rape cases at hospital, police, and forensic levels.

Is EC necessary or beneficial?

In addition, many victims are already on some form of contraception that should already eliminate ovulation. Many women will also inevitably be in a non-fertile phase of their cycle. There are statistics available for conception both in consensual intercourse and forced intercourse. The numbers are overwhelming low even without altering the woman’s reproductive state, especially since stress (and rape is indeed a stressor) can delay ovulation by itself. Since this is the case, would EC even be necessary? No. Additionally, the higher dose of estrogens or progesterones may further damage the woman and increase her risk of various cancers and other adverse events associated with extra estrogens and progesterones.

What about… [insert hypothetical condition] of the mother?

Some hypothetical quandaries were presented to me in the comments section. I addressed them as best I could, but I’ll re-address them here and hopefully clarify. One hypothetical situation I already discussed was if a woman was merely days pregnant, unaware of the pregnancy, and the pregnancy was undetectable via normal methods. Another hypothetical situation was of women with a known medical condition that contraindicates pregnancy, whether by the use of birth-defect causing medications or by risking the woman’s health/life with a pregnancy.Yet another example was a handicapped woman. The list of hypotheticals could go on and on ad infinitim. Based on Church doctrine, the hypothetical situation doesn’t change the ultimate answer. Life is life regardless of stage, method of conception, or medical condition of either mother or child. Under no circumstances are abortifacient means to be used according to the Catholic Church.

In this same vein, one of the comments correlated EC in these instances to medications given to women who may not know they’re pregnant in order to detect, fight, or cure their disease. This, to me, is comparing apples to oranges. EC’s primary goal is to “prevent” pregnancy based on the new definition of pregnancy starting at implantation not fertilization. Instead of detecting, fighting, or curing any disease, EC is only meant to stop pregnancy. However, if a woman is diagnosed with a disease that requires a “risky” test, medication, or therapy, any effect on her unborn child is purely unintentional. Now, if that same woman is given EC (or something with the same goal) with the test, medication, or therapy, that combination is not licit. Yet, if the woman needs a particular test, medication, or therapy she has the choice to refuse it or allow it. This leads us to the next question. 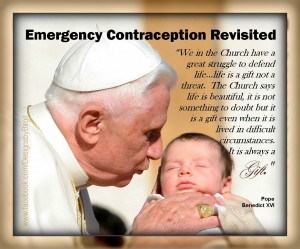 What about Double Effect?

By it’s very nature, EC goes against the first premise of the principle of double effect; the action must be morally good or morally neutral. There is a huge difference between treating or testing a newly pregnant woman with a drug or test that may harm her unborn child and giving a woman a drug that is meant to harm her unborn child as it’s only purpose. I’ve been there, done that, and gotten the t-shirt (sweatshirt, scars, ribbons, and prayers to go along with it). Some of the Sistas and our friends have also BTDT. At 20 weeks pregnant, I was given chemotherapy without harm to my unborn daughter. Theoretically, the chemotherapy could have harmed her (although MD Anderson had been giving pregnant women chemotherapy with no adverse effects for 20 years), but since the chemotherapy was intended to fight my cancer, had my pregnancy been disturbed, the principle of double effect would have still allowed my treatment. However, since EC’s only use is to “prevent” pregnancy not to treat the mother’s condition (whatever it may be beyond pregnancy), double effect does not come into play. Even in cases of tubal pregnancy, the only morally licit treatment is to remove the entire tube, not just the embryo. Nothing justifies knowingly doing something with the sole purpose of harming an unborn child, regardless of it’s stage or method of conception.

What about the Bishops being higher in the hierarchy than you, a lay-person?

While it is definitely true that I am simply an apologist by hobby, not a moral theologian, the Bishops do not have the authority to issue any statement contrary to the whole Church’s doctrine. Bishops are not at the top of the hierarchy. Actually, even the Pope doesn’t issue statements contrary to doctrine. Additionally, bishops from Spain vocally disagree with the German bishops and therefore, agree with me. The Church has long held the view that killing an embryo is the same as killing a newborn (or any other stage of life human) no matter what the means of conception or “necessity” accepted by the world. As Catholics we may buck the secular system (indeed we are encouraged to do so; “Be in the world, but not of the world.”) but we may not buck the Church’s doctrinal system if we want to be in full communion with the Church. So, while I must obey my bishop in matters relating to the diocese, if his orders are in contradiction to the Holy See, I am justified and obligated to follow the Holy See, not my local bishop.

In conclusion, while I must admit that there are some theologians, Catholic doctors, and others who may disagree with me, I can’t understand their position or advocate for the use of any contraceptive/possible abortifacient for the sole purpose of “preventing pregnancy”. Anything with the possible intention of harming a life, regardless of the reasons, is contrary to what our Church teaches. Some may even accuse me of trying to be “more Catholic than the Pope”, but as a trained Molecular Biologist with research hours in embryology and a former forensic biologist for almost 10 years, I realize that many people think medicine/science is much more of a guarantee than it is in reality. Other theologians, doctors, and bloggers agree with my stance as well. Pray, let us stand firm on our Faith and limit not our compassion to those we can see with our eyes. Let us live the Hippocratic Oath as doctor’s, nurses, pharmacists, mid-wives, lay-people,and “first do no harm“.

I have lately had Pope Leo XIII’s St. Michael the Archangel prayer in my mind, so let us pray… 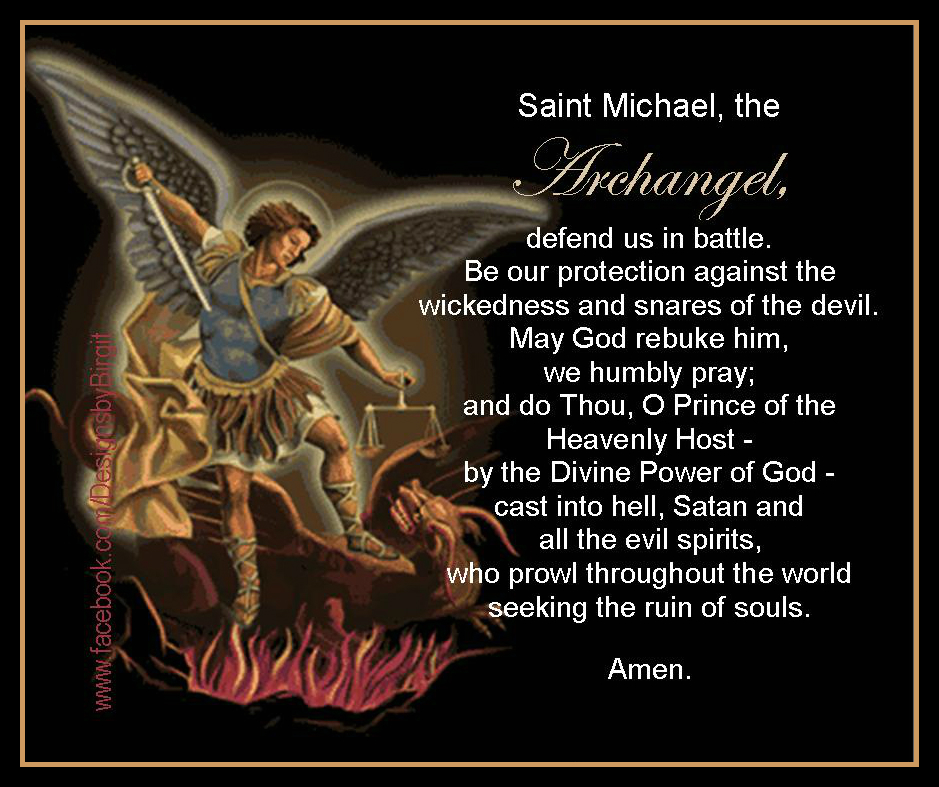