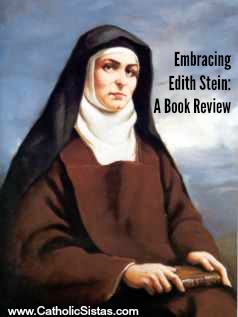 Before reading Anne Costa’s book Embracing Edith Stein: Wisdom for Women from St. Teresa Benedicta of the Cross, I knew who Edith Stein was but did not really know a lot about her. She had figured into other things I have read and I had connected with some of the passages quoted from her writings. But, of course, I had never (and still haven’t) read any of her writings. When this book came to my attention I jumped at the chance to explore the writings of Edith Stein a bit more. I have to say that having read the whole book I have a deeper appreciation for the writings of Edith Stein and I feel like I know her a bit better.

But that alone is not what this book is ultimately about. If you are interested in Edith Stein but not ready to jump into her writings quite yet, this would be a good place to start. In this book, Anne Costa shares her spiritual journey in discovering more about herself as a woman and as the person God designed her to be. She does this through the writings of Edith Stein. Costa shares with her readers the friendship she has with Edith and challenges readers to reflect on their own spiritual journeys. I was swept into this journey of self-discovery as I read through this tome and I want to share some of those moments from the book with you.

First of all, I enjoyed reading the chapter on the life and philosophy of Edith Stein. I knew the basics of her life but this chapter delves into her life’s journey and uses her writings to form the person Edith Stein was. I found it particularly interesting that as a teacher, prior to entering the convent, Edith often taught during the day and prayed through the night. She accomplished a lot and maintained a strong prayer life. I know for busy moms it can be hard to find the time to have a deep and intimate prayer life while maintaining a home and caring for a family. I was particularly struck by Edith’s explanation:

“I don’t use any extraordinary means to extend my working time; I just do whatever I can. Apparently, what I can do increases in proportion to the number of things that have to be done. When nothing urgent is called for, my energy gives out much faster. Heaven evidently has a sense of economy … It all depends on having a quiet little corner where you can talk with God on a daily basis as if nothing else existed … and regarding yourself completely as an instrument, so that you treat your most frequently demanded talents, not as something that you use, but as God working through you.” (p. 13)

There is so much packed into that one short passage! This is just one example of many that caught my attention. I was amazed to learn more about Edith Stein’s character and to read of the admiration and high esteem those who knew her had for her.

The heart of Costa’s book discusses the four gifts God has bestowed on women: Receptivity, Generosity, Sensitivity, and Maternity. There were lots of things to take away from each of these chapters. One that stood out for me was in the chapter on generosity. Costa takes us back to Genesis in order to understand the role of generosity in a woman’s life, particularly as man’s helpmate. Edith offers this explanation of woman as “helpmate”:

“The woman who ‘suits’ man as helpmate … complements him, counteracting the dangers of his specifically masculine nature. It is her business to ensure to the best of her ability that he is not totally absorbed in his professional work, that he does not permit his humanity to become stunted, and that he does not neglect his family duties as father. She will be better able to do so the more she herself is mature as a personality; and it is vital here that she does not lose herself in association with her husband but, on the contrary, cultivates her own gifts and powers.” (p. 55-56)

I read the above passage and wrote in the margin, “Best definition of wife as ‘helpmate’ to husband that I’ve seen.” I continued reading and discovered that Costa had a very similar reaction as my own, she says, “I had never heard woman’s role of helpmate described in such an affirming and uplifting way” (p. 56). This is just one example of many with which I connected. 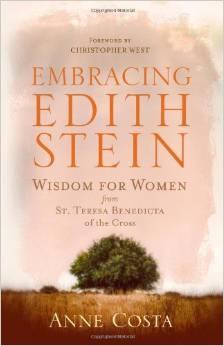 From a practical standpoint, this book would be a great read for a book club. Each chapter ends with 3-4 questions or points to ponder. I found myself answering some of the questions in the margins as I read along. I think the questions Costa provides would lead to some great discussions in a Catholic book group as well as some deep inner reflection if reading this on your own. The book also comes in at just about 100 pages, making it doable for busy women.

Overall, I think this is a book worth checking out. I learned more about Edith Stein than I had known previously, felt like I was taken on an interesting journey of self-discovery, was introduced to some amazing passages from Edith Stein’s writings, and was challenged to reflect on aspects of my own life and my own concepts of womanhood.

The book is published by Servant Books and available from Franciscan Media for $13.99 as well as other online retailers or check with your local Catholic book store.

I received a copy of Embracing Edith Stein: Wisdom for Women from St. Teresa Benedicta of the Cross from the author in exchange for a fair and honest review.

One Reply to “Embracing Edith Stein: Wisdom for Women: A Book Review”