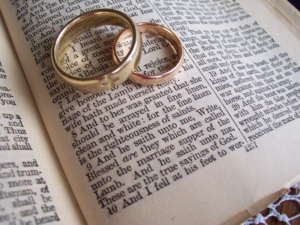 As Catholics, we all know the powerful spiritual nature of the Sacrament of Matrimony. In the Catechism we are taught:

1601 “The matrimonial covenant, by which a man and a woman establish between themselves a partnership of the whole of life, is by its nature ordered toward the good of the spouses and the procreation and education of offspring; this covenant between baptized persons has been raised by Christ the Lord to the dignity of a sacrament.”

Defending the Sacramental nature of the union between a man and woman is not difficult. We have a clear path of solid teachings handed down through sacred tradition.

Defending marriage law in the civil arena is an entirely different story.

We’ve all heard the arguments:

“We’re not discussing Catholic moral theology, we’re discussing civil law.”
“Why does it matter what consenting adults do in their own bedrooms? Marrying homosexuals doesn’t affect YOU!”
“This is a civil rights issue!”

… and a quadrillion others, I’m sure. The fact is, it’s quite a complicated issue.

First, it’s important to separate the purpose of marriage from the effects of marriage in civil society.

The purpose of marriage, historically in civil society, was solely meant for the legal protection of the family that is built through the procreative act. Marriage is a contract that creates kinship between a man and a woman so that the basic building block of society, the family, can be legally protected. So fundamentally, the law, at it’s basic roots, is about protecting the potential that naturally, normally, and typically arises from having sex.

The word marriage is ultimately derives from Latin mātrimōnium which combines the two concepts mater meaning “mother” and the suffix –monium signifying “action, state, or condition.” Marriage is about the “action” that makes a “mother”… sex, and specifically procreative sex.

A few states in the US still require the marriage to be consummated, as a completion of the marriage contract. Yes, marriage is about having LEGAL PROCREATIVE SEX 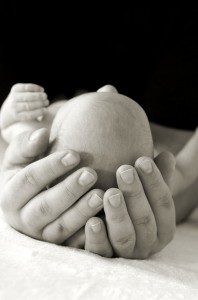 (procreative meaning that it is done in a manner that could bring about procreation – assuming fertility is present). Being fertile and actually producing children is never mentioned. Fertility is an entirely separate issue, less you begin to question the protection of the marriage contract. Of course marriage is also about a bond of love between man and wife. A wife is not a piece of property that can be bought or sold simply for the ability to procreate. Marriage, by law, must be consensual. But regardless, in the civil arena – marriage, at it’s very basic roots, is about protecting the legal rights to have procreative sex.

The effects of marriage in civil society vary from state to state and country to country. These are the laws that give entitlements to married couples. These entitlements often make sense when we consider that the family is the building block of the greater society. There are economic benefits that encourage families to raise up concerned citizens who will become productive tax payers in the next generation. There are privacy laws that protect our ability to share personal information within the family. There are legal restraints on who we can name as beneficiaries on financial products such as health insurance and retirement plans. All of these laws have been established over time, based on the desired effects that the civil community feels is important.

These effects of marriage are often voted on by our political leaders or decided upon in the court of law. Marriage is not defined by these effects, but it often takes on these attributes because it is the historical building block of society.

Now that we have covered the definition and effects of marriage in society, let’s consider the current climate on the institution of marriage.

Those who promote so called “same sex marriage” often claim that they simply want the same effects or attributes opened to same sex partners that are available to married couples. As much as we, as Catholics, would love to fully implement a Catholic understanding of the family in society (and we do have the ability to voice that opinion through our votes), many of these laws may not be in our control. In fact, there are many ways around the established laws that open same sex couples up to quite a few of these effects. In many ways it’s hard to argue with certain things – like medical privacy laws. It is perfectly fine to be compassionate with all our brothers and sisters in situations like this. This is why it’s important to fully distinguish that these legal effects of marriage do not fundamentally DEFINE the idea of marriage. 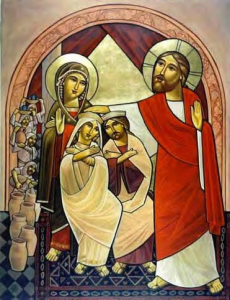 However, there is another side that the promoters of “same sex marriage” are desiring to take on… and that is the very fundamental meaning of marriage itself. This is where we, as a civilized society have to draw the line. Opening up marriage to same sex partners would be slapping the government’s approval on sexual perversion. It would be teaching our children and all future generations that, according to the law, “marriage” is just about sex for pleasure. That’s all it is. It would be telling them that “some marriages are for procreating but others are not”. And this is really all coming down to the ACT of sex. And the ACT of sex is twofold by NATURE, by DESIGN. Yes, sex is an expression of love between two people, but it is also the ONLY means to natural procreation between those same two people, built into the very design of human beings. Marriage is a legallity that protects that institution of the family that is built through the ACT of sexual procreation. Anything else would be a perversion of the very meaning of marriage.

So as discussions arise, as they are very likely to in today’s political climate, remember to fully distinguish the fundamental meaning and purpose of marriage from the effects it has had on civil laws. Remember that we are allowed to each voice our own opinion on how we feel civil society should uphold the institution of the family through the effect of civil laws, but that these effects do not then, in turn, redefine the very meaning of marriage.

Emily is a cradle Catholic, wife of over 12 years to her hilarious husband, and a mother of 4 kids. Emily loves all things Catholic and stays busy volunteering at her children’s Catholic School and parish. She also works full time as an Electrical Design Engineer.