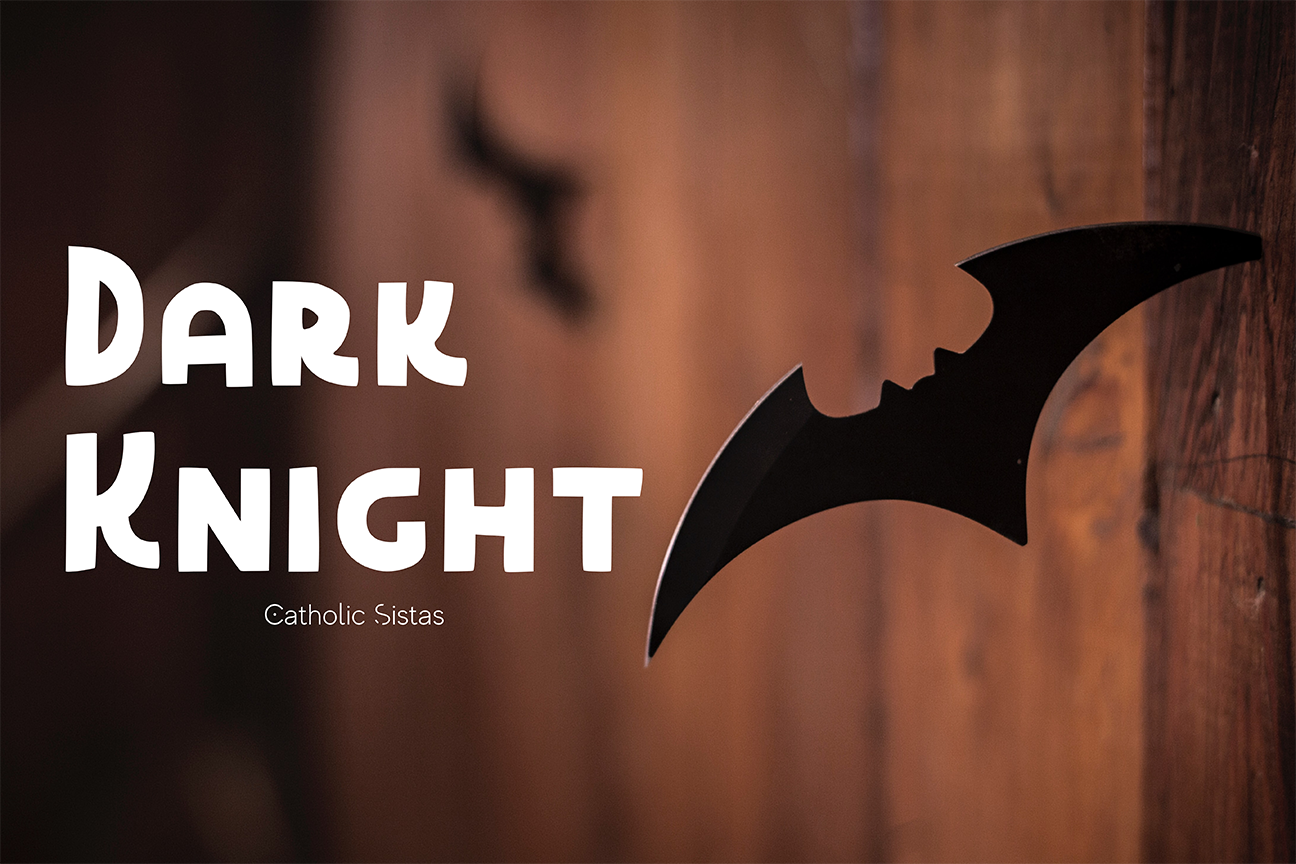 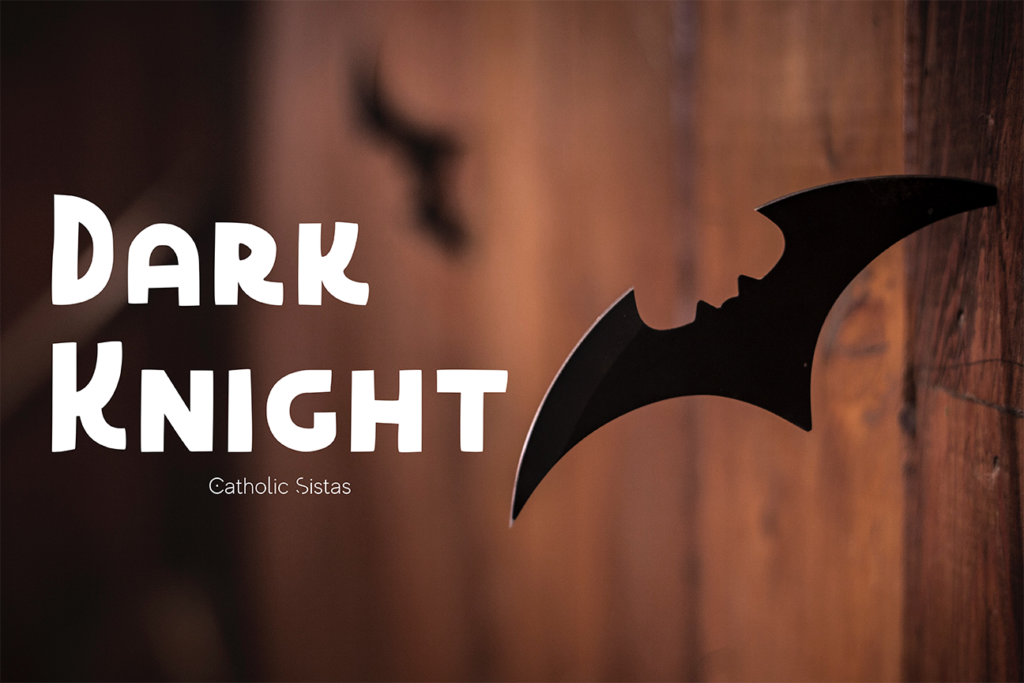 Mention the words “dark night” in conversation today and most likely one’s first reaction will be to conjure up images of that mysterious, darkly-disguised superhero, The Dark Knight.  But for those of us who attempt to live in the spiritual realm, the words “dark night” just might conjure up the mysterious, darkly-disguised nemesis, The Dark Night. Just a play on words? Perhaps.  But I propose that there is a lot more there than you might imagine.  First, a bit of background.

The Dark Night (of the Soul) is a term first coined as the title of a poem written by St. John of the Cross, a 16th century poet, mystic, and priest, who was later declared a Doctor of the Church (a title given to those saints whom the Catholic Church deems to have contributed significantly to Catholic doctrine or theology.)  According to the Modern Catholic Dictionary, The Dark Night of the Soul is defined as a “general term in mystical theology to identify every form of purification through which God leads persons whom he is calling to a high degree of sanctity…. It is called a ‘dark’ night to emphasize the intensity of withdrawal of God’s illuminating grace.”

One must wonder whether St. John had any inkling that his poem would birth a never-ending search to understand the dark night, resulting in everything from secular opinions to lengthy theological dissertations on the subject.  Equally compelling opposing arguments stand firm – one side citing that everyone will be challenged with at least one dark night during their life, the opposing side adamantly holding firm to the belief that such an experience is rare and experienced only by those who have achieved mystical union with God.  Many saints have told of their own “dark night” – St. Paul of the Cross, St. Therese of Lisieux, St. Gemma Galgani and, most recently, St. Teresa of Calcutta.  Since its birth within Roman Catholicism, the dark night has been echoed within the groaning of almost every human condition.  Martin Luther’s dark night was an integral part in triggering the Protestant Reformation.  C.S. Lewis chronicled his dark night following the death of his wife in the work A Grief Observed under his pseudonym N.W. Clerk.  The psychiatrist, Carl Jung, blended the medieval art of alchemy with the dark night, describing it as the “night sea journey.”  Pema Chodron, an American Buddhist nun, teacher, and author, has written extensively on the dark night, focusing on how to navigate through its difficult emotions.  Even Charles Dickens’s Ebenezer Scrooge shed light on the inner workings of the dark night as he was confronted with the Ghosts of Christmas Past, Present, and Future.

That all being said, I could never be so presumptuous as to assert that I am a mystic on par with the saints who experienced the dark night on their way to achieving a high degree of sanctity.  I wouldn’t even go so far as to venture to say I could ever be among the great authors of philosophy, psychology, or theology who have addressed the topic authoritatively.  I can only relate my experiences for what they are – experiences of an ordinary woman living an ordinary life who, by the gift of grace, is in love with her God and her faith.  As to whether what I have experienced was ordinary or superordinary, well, I leave that in the hands of the good God who chose to withdraw Himself from my very ordinary world.

The circumstances that initiated my descent into the darkness were merely catalysts allowed by God for achieving His merciful Will.  The particulars are irrelevant here, as God could have chosen a thousand different scenarios to bring me to the same place. Likewise, my reactions were per my usual, responding to the trials by trying to using the time to offer my suffering for others or for spiritual reading, writing, praying.  But this time, the challenges quickly overtook the best intentions of my spirit.  Days followed days of discomfort and tiredness, increasing frustration, lack of motivation to pray, and an onslaught of temptations that I became too weak to fight.  I felt myself slipping, but I had no compulsion to stop it.  It was then I started to feel the darkness.  No stranger to the darkness of clinical depression many years ago, I thought I knew my opponent. From outer appearances, I was dealing with “life.”  But interiorly, I felt more and more removed from all that had once been the backbone of my faith and the basis for my spirituality.  Little by little, doubts began to creep in and beliefs I once held as sacred and undeniable seemed either trivial or no longer worthy of trust.  The darkness settled into a deep loneliness that went far beyond the need for human company.  It was a loneliness with a deep void that brought fear –  an abject fear that I had been abandoned, or worse yet, rejected by Him.

One night, unable to sleep, I was plagued with an endless barrage of questions.  Where was the strong faith I once thought I had?  Was my faith so weak that in the face of a string of difficulties I was guaranteed to fall? Was  I powerless against temptation?  Had I really ever been forgiven for the multitude of times I had failed Him?  Was He truly a God of mercy?  Could I trust what I so often professed, “Jesus, I trust in You?”  Had I just imagined the love and consolations He had lavished upon me over the past year?  Was I never to feel that love and connection to Him again?  The questions piled up like a huge weight that came crashing down upon me.  Was this the abandonment He felt the night He was in the Garden, His suffering so intense He sweat blood and asked that the cup be taken away?  Was this coming from Him?  Was He asking me to enter into His Passion and feel it so intently that I too would beg for the suffering to end?  And if He was, where was the strength I would need to bear it?

Attempts to pray were futile, so I typed an imploring message to a dear friend who I knew God had “spoken” through previously.  Exhausted, I fell into a fitful sleep and when I awoke, there was a message in reply.  No lengthy theological explanation to help steady me or crass judgement as to my sanity.  One sentence only.  “You’re going to be fine.”   I had just experienced a long period of increasing darkness and the most spiritually painful, distressing night of my life, and that was the answer?  ‘You’re going to be fine.” A statement of complete confidence and trust.  I glanced over at the image of Divine Mercy across from my bed and I knew.  Whatever the reasons were, it was all for His Glory.  Just exactly what all of it meant, I wouldn’t have the answers to for quite some time. But something drastically changed that night.  I had been stripped of everything, yet there was a glimmer that so much more was to be gained. Faced with the dark of complete nothingness, I began to see everything. The darkness left a imprint on me that ironically illuminates the brilliant light of my faith.

The Dark Knight and The Dark Night

“He is a silent guardian, a watchful protector…a dark knight” for our dark night.

You need not fear the darkness.  You’re going to be fine.