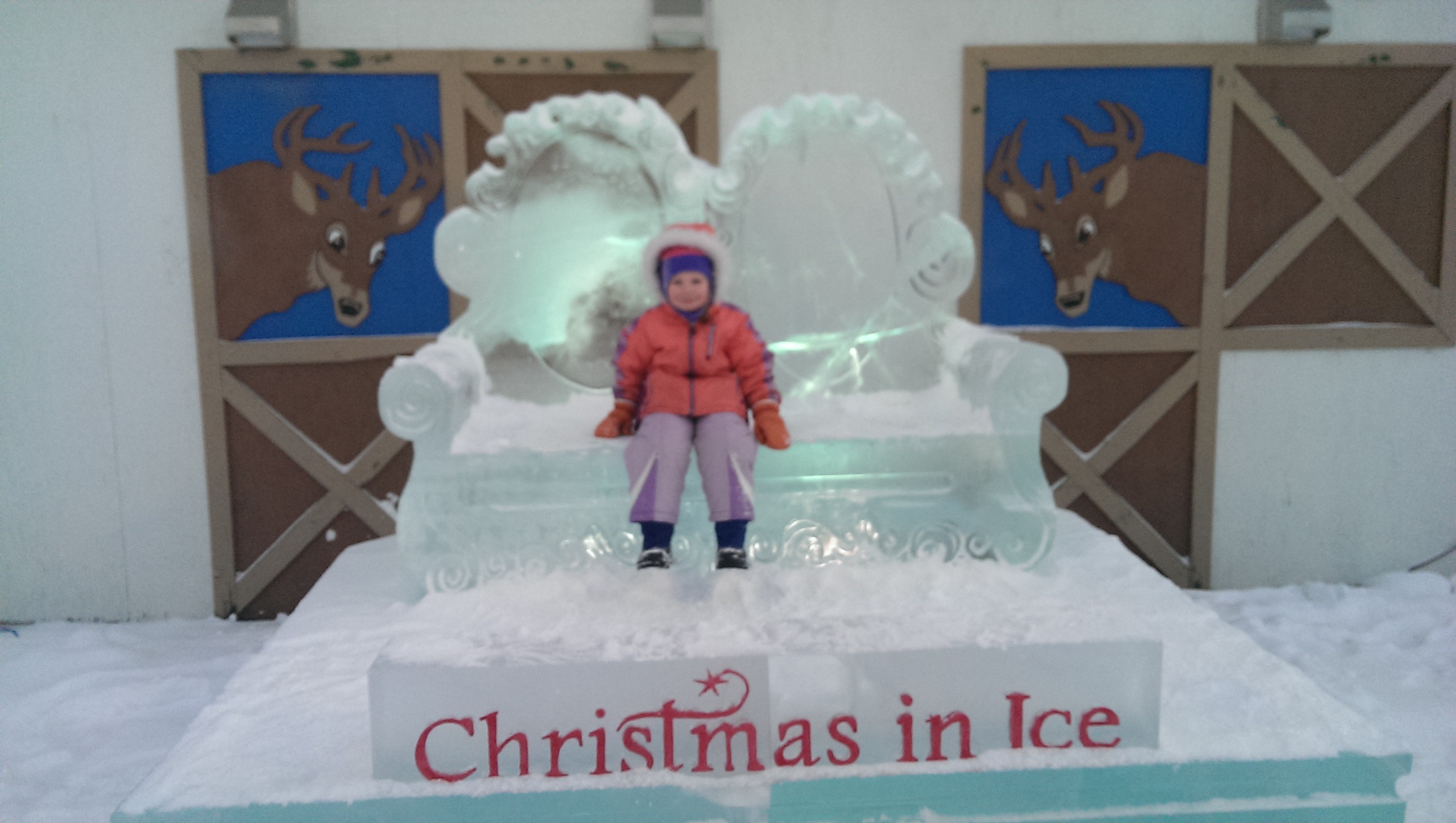 I live in interior Alaska and today was fairly brisk at 20 degrees below zero. So naturally, my daughter’s preschool teacher decided this was a good day for me to help chaperone 30 preschoolers at the nearby “Christmas in Ice” park, which is a showcase of ice sculptures, mazes, and slides carved by local artists.

As I ran around trying to keep up with the handful of kids assigned to me (and thinking it would be easier to herd feral cats), I started thinking about the endless opportunities we humans must provide God and his angels for amusement. I could just see Jesus up there in heaven, face-palming us for risking our lives in arctic temperatures just to show a bunch of preschoolers an ice sculpture of the Holy Family.

Surely, most of the hilarity we provide God and our heavenly patrons comes from our foolish pride. We’ll have our common sense and conscience screaming at us that This is SO going to end badly, dude! but we still proceed in a futile attempt to prove we’re right. Like that time three years ago, when a friend from church invited me to join her on an outdoor run in the middle of winter. So what if I hadn’t exercised in nearly a decade? This was my chance to prove I was a real Alaskan!

Driving to my friend’s house the next morning, I checked the temperature: 15 below. I was still acclimating to the cold back then, so I swallowed hard. I thought about turning back, but I’d already bragged on Facebook about how tough I was to be running in Alaska in winter, so I had to keep going. I consoled myself with the fact that I’d met two others from Fairbanks who regularly ran in the winter. One in temps as low as 40 below. How hard could it really be?

When I arrived, my friend, Heidi, was wearing typical runner’s spandex and looking as if she was about to go out for a leisurely summer jog. I, on the other hand, was bundled up like a tick about to pop. We put springs over our shoes for traction and then started out. The plan was to run the two-mile loop surrounding her neighborhood, which Heidi assured me was “super easy.”

We hadn’t even been running a full five minutes when I had to admit I was suffering. And I mean, “Doing penance for killing a busload of nuns and orphans” kind of suffering. You imagine serious cold and you think, “numbing,” right? And it will…eventually. But not before it feels like a cloud of wasps are stinging every exposed inch of your flesh.

We hit the main road and started jogging in earnest. Running, as it turns out, is rather difficult if you can’t breathe. And since the air was so cold it felt like a knife being plunged into my lungs with each inhale, I wasn’t getting a lot of it anyway. But none of that seem to bother Heidi. She’d brought her dog along and the two of them jauntily trotted a few feet ahead of me. She chattered lightly the whole time, but I couldn’t hear a thing over the sound of my own ragged breath and hammering heart.

We crossed a road and got onto a bike trail. This was where it got scary. Beach runners know the give of the sand forces you to exert more effort to push off each step. It’s the same with snow. We’d gotten a few inches of the white stuff the night before, so the path was slushy and uneven. I lived in terror of taking a very public spill while cars sped past us. I fleetingly wondered if there was a patron saint for idiots and then realized I would probably qualify if I died right now.

I was no longer cold, but I could feel my energy pouring out like a sieve. We hadn’t even covered the first mile and I was on the verge of my heart valves just blowing into a dozen pieces right there in my chest. By now, I was silently berating myself for not bringing holy oil so Heidi could anoint me when I collapsed on the side of the road.

I began to feel sick, so I slowed down. But then the cold began to creep in again. My choice became clear: I could freeze to death or die from a heart attack. I began to panic because I couldn’t remember the last time I’d gone to confession. Even worse than imminent death was the nagging feeling I was holding back a serious runner. Heidi hardly filled out a size 1 and breezily talked about running “five or six miles a day.” I kept giving her permission to run ahead to get in a real workout (and so I could hide my misery), but she insisted on staying with me the whole time. (I think she just wanted to be close in case I needed CPR.)

We turned around about a mile from her house. I stoically tried to keep up the show, but was privately nursing fears about how my husband was going to raise four kids on his own. Does he know where the wills are? Can he afford a live-in nanny on our Knights of Columbus life insurance payout? Would running in Alaska in December be considered suicide and void the policy? (I did brighten a little when I realized I’d probably get to skip purgatory if I ended it all in the midst of such intense suffering.)

Finally, we made it back to the house. My clothes were sweat-soaked and I couldn’t feel my toes. My stomach was churning and I was pretty sure I had done permanent damage to my heart and lungs. But I had made it; I had survived running in the interior Alaska winter. Heidi asked if I wanted to join her again later that week for another run. And this time, I used the common sense God gave me and declined. I knew if He’d spared my life that day, it could only be for one reason: so I could confess to being a prideful idiot.

One Reply to “Confessions of a Prideful Idiot”