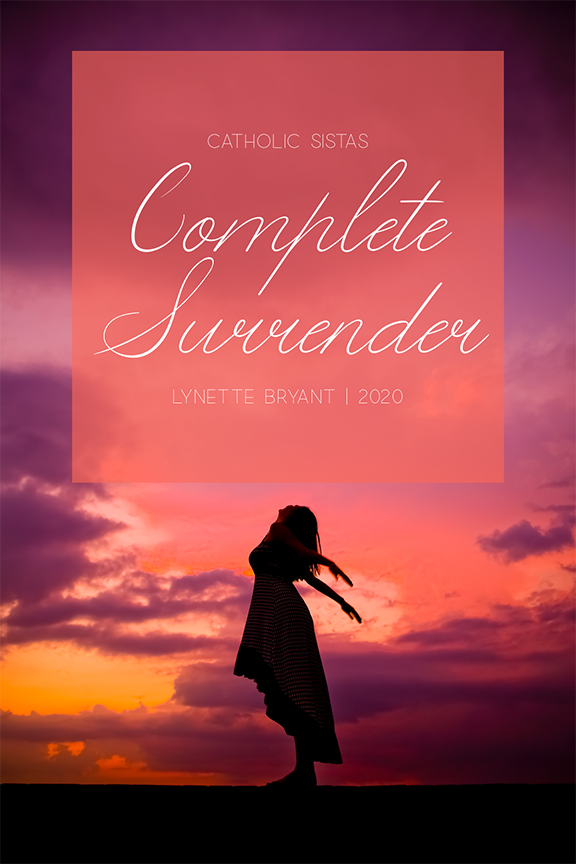 The last seven words of Christ.  Here, upon the Cross, is the Word made Flesh.  The second Person of the Holy Trinity. The Redeemer, the Savior, Love and Mercy Itself.  And from His Sacred lips come words of complete surrender, body and soul, to the Father.

I’ve heard these words of Christ every year as I’ve moved through Lent, Passion Sunday, and into the Triduum, but I hadn’t ever truly considered the full implication of them until recently.  “Jesus, I trust in You!” has been a mantra of mine for several years and while those words have helped me turn to God in trust, I noticed an increasing void. A call to go deeper, to surrender, complete surrender.  It is one thing to trust, another thing to let go. Not just a little, but as completely as Christ did on the Cross. I can profess that I trust Jesus, but then still act as if I have to orchestrate a solution to the problem or influence someone to change their behavior.  Trusting doesn’t necessarily mean I’ve stopped playing God.

In searching for a prayer to help me with letting go, I came across the story of the Servant of God, Father Dolindo Ruotolo, a Franciscan priest from Naples.  An unassuming man, he referred to himself as “the little old man of Mary, Most Holy.” Contrary to his own self-perception, however, he was hailed as a saint by Padre Pio and revered among many as a prophet, predicting “a new John will rise out of Poland.”  There are thousands of accounts of miracles attributed to his intercession as he sought to bring compassion, healing, and mercy to the poor and the sick (and he had no fear of being near those who were contagious!) He must have had quite a way about him, writing prescriptions for those in dire need with the signature: “Doctor Cretinico Sciosciammocca” (Doctor Stupid Fly-swatter)” – not so stupid considering the treatments he prescribed brought about miracles! Captivated by this “little old man”, I was drawn to his ardent love of the Church, his unwavering devotion to our Blessed Mother, and his ability to give time to countless charitable works while yet penning 33 volumes (10,000 pages) of in-depth commentaries on the Old Testament.

Yes, this “little man” had struck a chord within my soul just as I imagine his presence would have done to so many others during his life.  Perhaps the secret to his tireless work amid his own personal sicknesses and sufferings (even his name, Dolindo, means pain) was his ability to give it all to Jesus in complete surrender, in loving imitation of our Lord on the Cross.  His “spirituality of surrender” is powerful, as I can attest to after having begun my apprenticeship in the process of “surrendering”. Why an apprenticeship? Because I quickly discovered by Day 3 of the Novena that this wasn’t a Novena I would pray once or twice and then move on along my spiritual journey.  This was more like the Via Dolorosa of Surrender that I needed to walk every day of my life until the end, just as Christ embraced His Cross and carried it to His final end, an act of complete surrender to the Father.

I discovered Fr. Dolindo’s Novena of Surrender a few months before Lent began and the timing could not have been more apropos.  When it comes right down to it, there is so very little on the grand scheme of things that I can control in my life. My human nature and my tendencies to anxious thinking rebel at the idea of letting go and giving up my imagined sense of control.  I consider it somewhat of my own personal little miracle, procured I am sure through the intercession of the Servant of God, Father Dolindo, that there have been moments during these ever-changing days where I have felt a peace I have never felt before.  Whatever may come in these days, weeks, and months ahead, I will continue to walk bravely on down the Via Dolorosa of Surrender, with these words on my lips ~

“O Jesus, I surrender myself to You, take care of everything!”

Do you struggle with surrendering certain aspects of your life to God?

How can you incorporate a “spirituality of surrender” into your life?