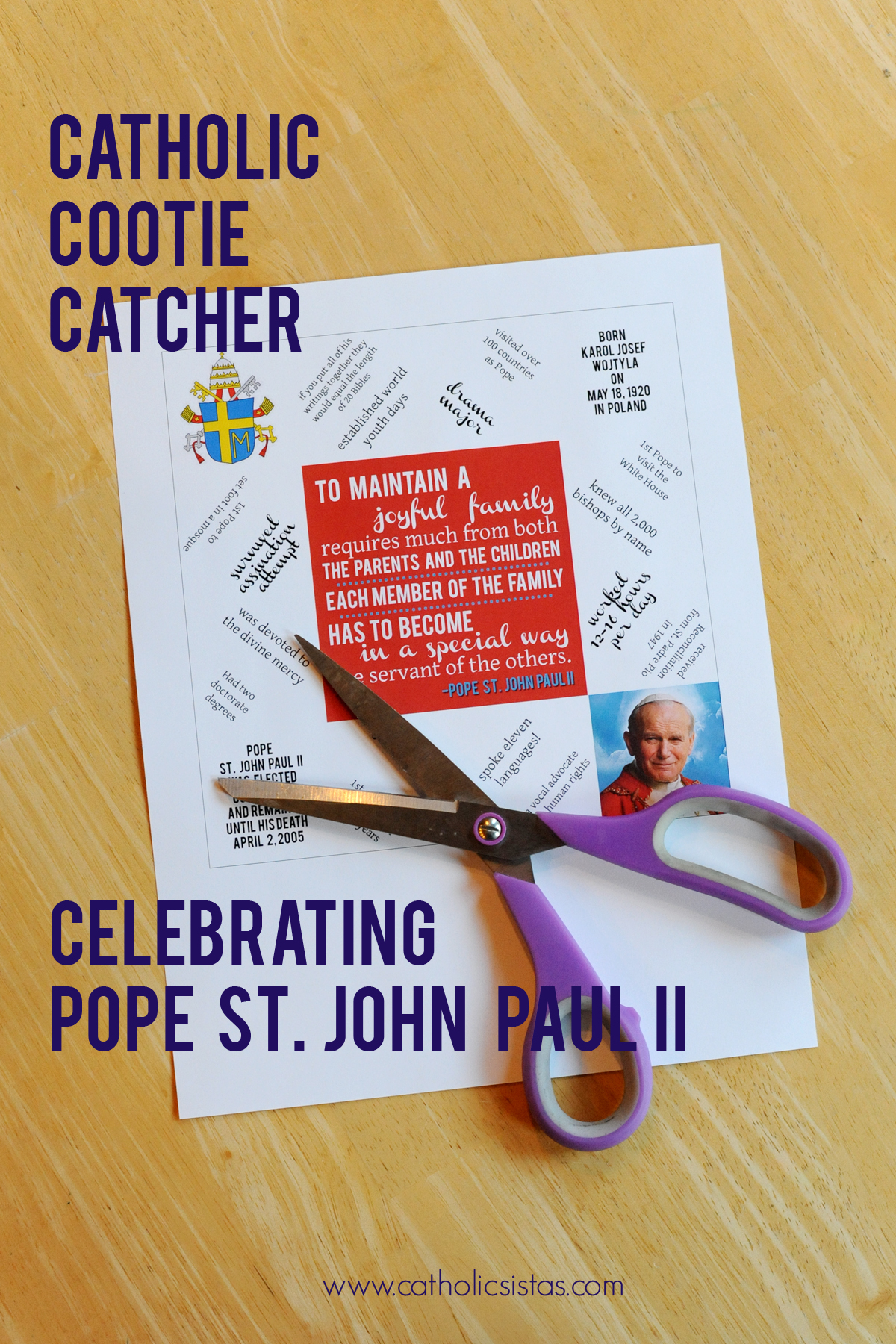 When I was thinking about what kind of activity that might be fun to celebrate the feast day of Pope St. John Paul II for some reason the grade school ‘cootie catcher’ came to mind.  Although I haven’t seen anyone with one since I was a kid I thought that it would be all the more fun introduce to our children.  So today we are going to make a Catholic Cootie Catcher in honor of Pope St. John Paul II!

Making these is really simple.  All you have to do is print out the PDF and use the following folding instructions… a project that will take you five minutes at most.  Then you can play (and learn!) for the rest of the afternoon.

Step 1:  Print out PDF on regular printer paper and cut along the perimeter line. 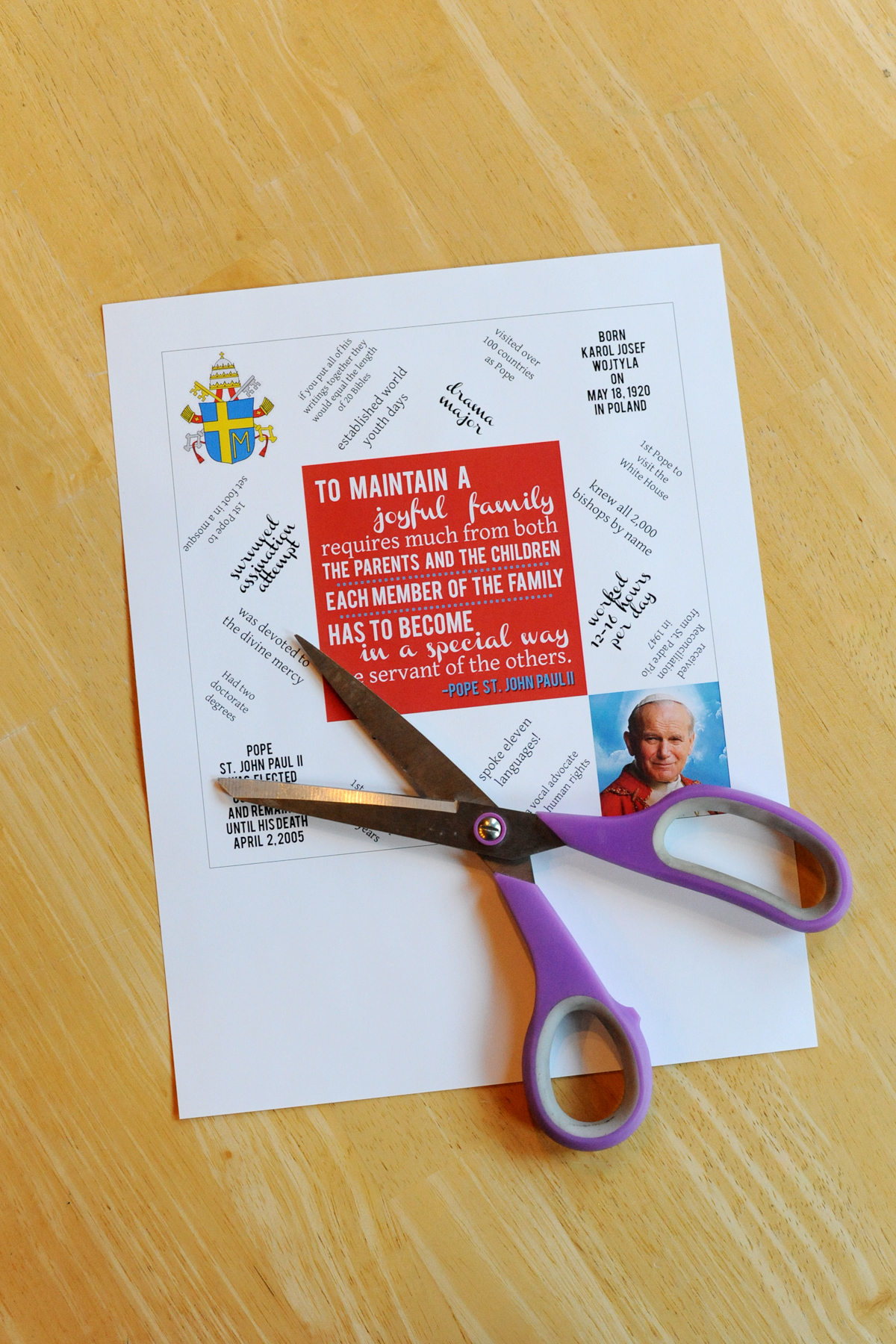 Step 2:  With the back side up, fold from corner to corner, making a triangle. 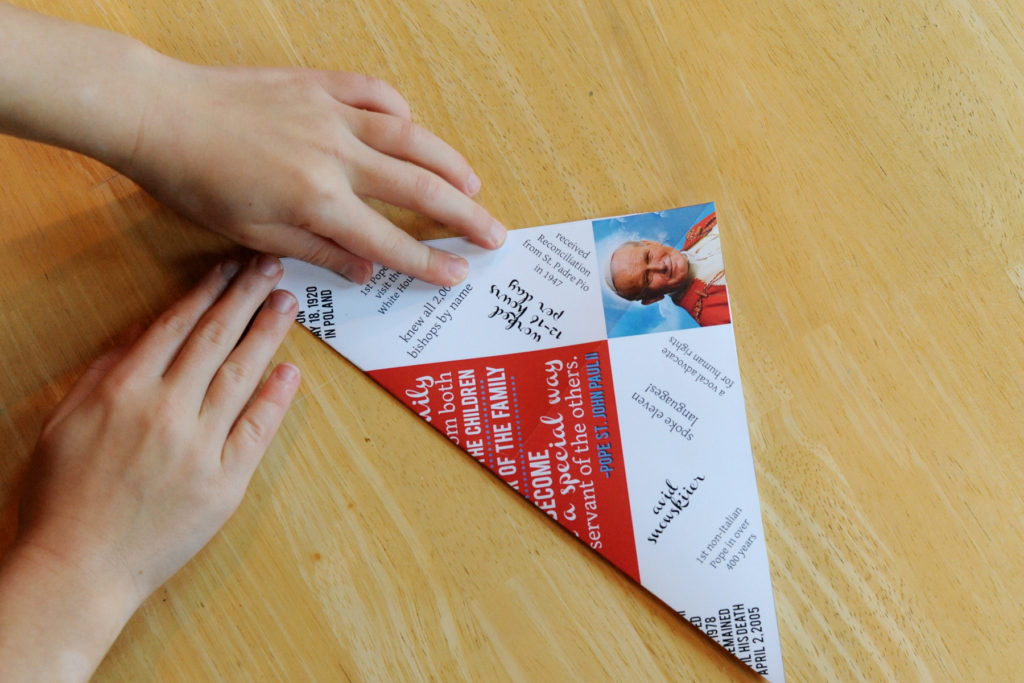 Open the paper up and fold from corner to corner again in the opposite direction.  Now unfold your paper and you will have an X creased into your paper.

Step 3: While face down, fold one corner to the center of the square where the diagonals meet. 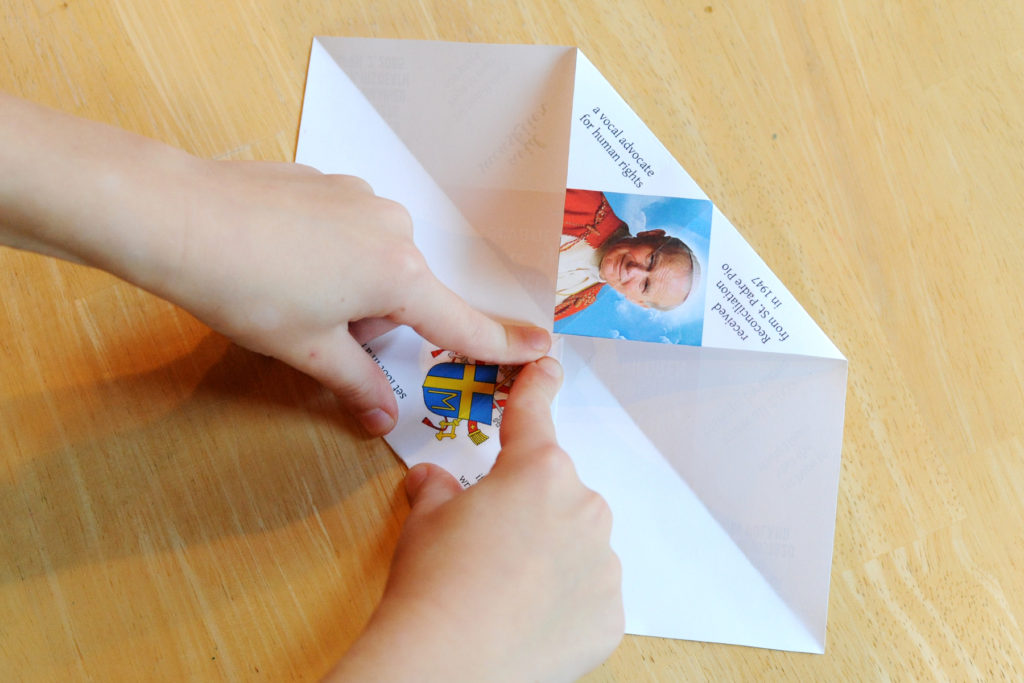 Repeat this with the other three corners.

Step 4:  Turn the paper over and fold one corner to the center of the square again. 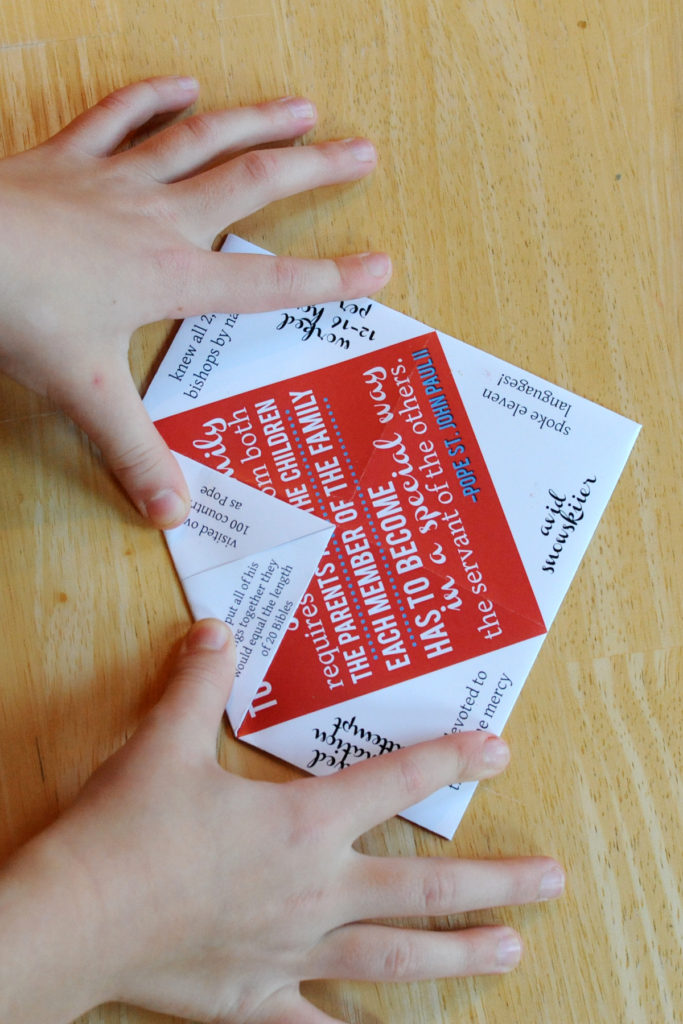 Repeat again with all corners. 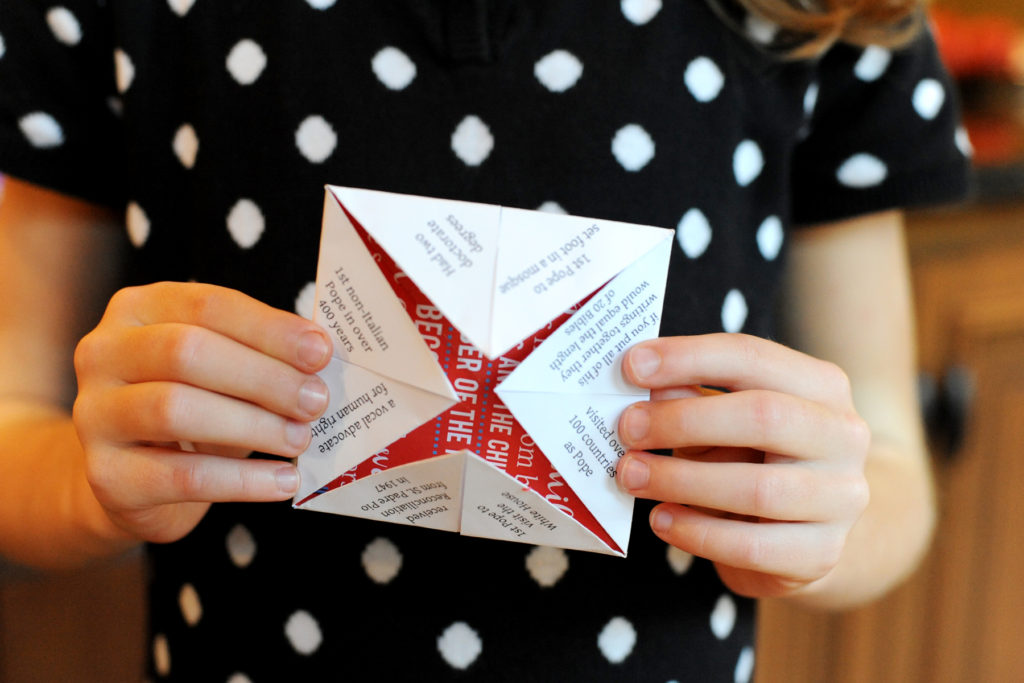 Step 5:  Fold and unfold the square in half both horizontally and vertically. 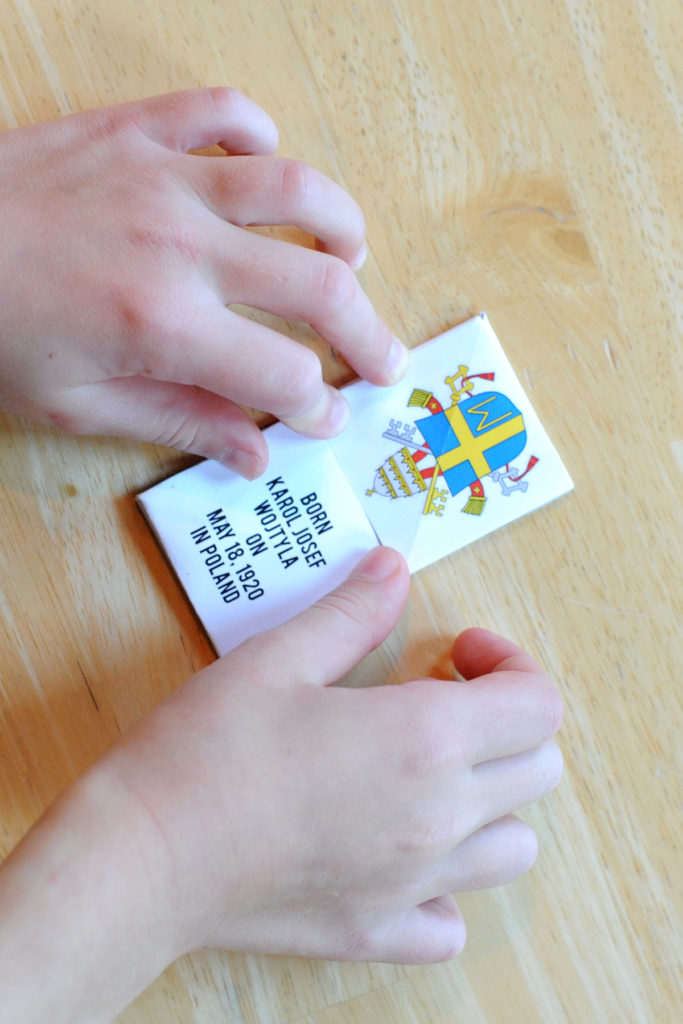 Step 6:  Turn over and slide your fingers under the flaps and push the outer corners to the middle. 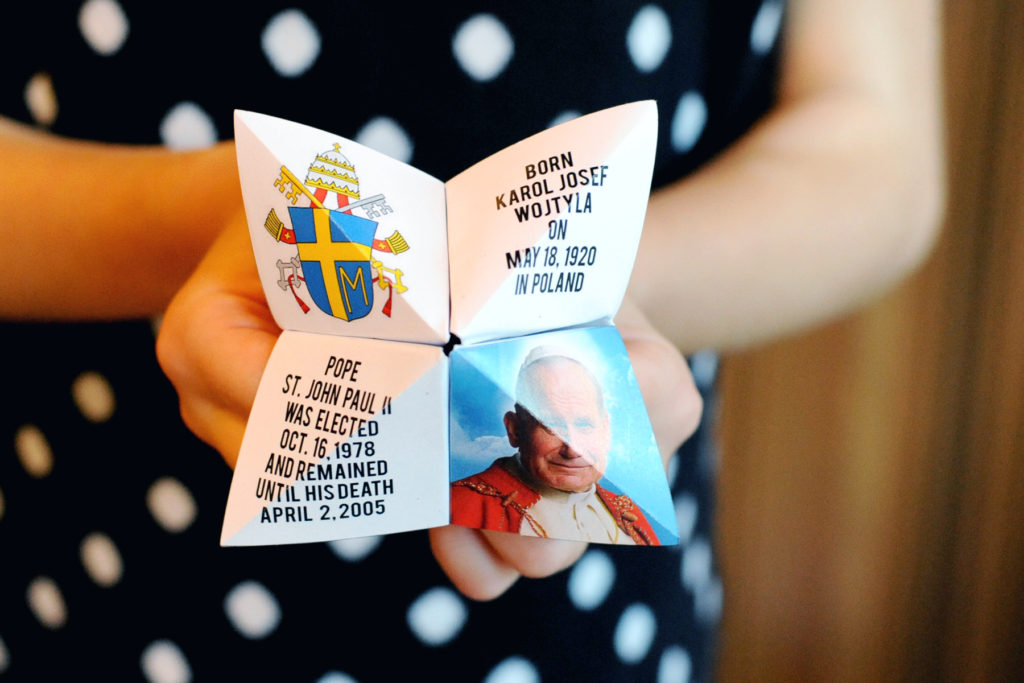 Now.  The caveat.  I took 18 of my favorite facts and put them all onto one cootie catcher with the idea that the kids could play with dice to see how many time to open and shut the flap before reading the information.  That is the project you see pictured in the above tutorial and available in the PDF download here.

But after some playing our daughter really wished that she could play in the traditional manner where the numbers are already on the paper and no dice are involved.  SO… I made up two more options you can print from if you would like the traditional version.  There are two because once I put the numbers on the cootie catcher it took away half of the learning material.  You do not have to print both of them but I would because it will give you twice as many facts to learn and provide more than one child with something in their hands 🙂  So the link to the revised versions are as follows:

I hope that your family enjoys this project as much as ours did.  We definitely learned some new things about Pope St. John Paul II.  Personally, I am eager to follow up with reading some of the many writings that he has published.

Do you have a favorite recommendation?  What should I read first?

Guest writer Janalin Hood is a stay-at-home-momma to three and one on the way! She homeschools her littles and loves learning about our faith with crafts and hands on play/activities.